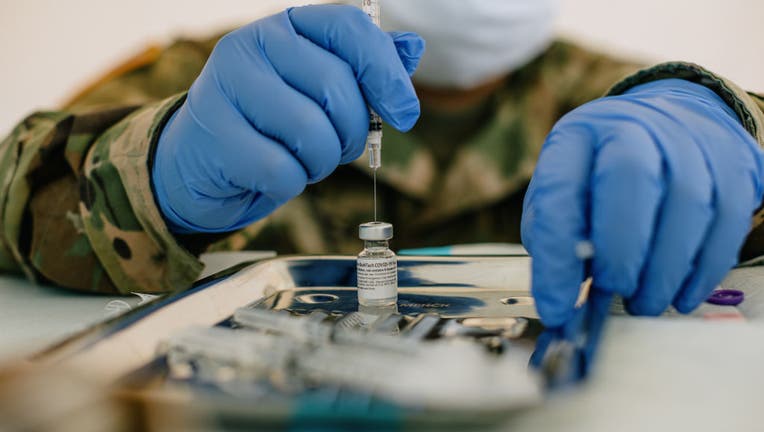 A member of the National Guard prepares a dose of the Pfizer-BioNTech Covid-19 vaccine at the University of New Orleans Lakefront Arena drive-thru facility in New Orleans, Louisiana, U.S., on Tuesday, Aug. 24, 2021. The Louisiana Department of Health

WASHINGTON (AP) - Up to 40,000 Army National Guard soldiers across the country — or about 13% of the force — have not yet gotten the mandated COVID-19 vaccine, and as the deadline for shots looms, at least 14,000 of them have flatly refused and could be forced out of the service.

Guard soldiers have until Thursday to get the vaccine. According to data obtained by The Associated Press, between 20% to 30% of the Guard soldiers in six states are not vaccinated, and more than 10% in 43 other states still need shots.

Guard leaders say states are doing all they can to encourage soldiers to get vaccinated by the time limit. And they said they will work with the roughly 7,000 who have sought exemptions, which are almost all for religious reasons.

"We’re going to give every soldier every opportunity to get vaccinated and continue their military career. Every soldier that is pending an exemption, we will continue to support them through their process," said Lt. Gen. Jon Jensen, director of the Army National Guard, in an Associated Press interview. "We’re not giving up on anybody until the separation paperwork is signed and completed. There’s still time."

The Army said Wednesday it will immediately begin discharging soldiers who have refused to get the mandatory COVID-19 vaccine, putting more than 3,300 service members at risk of being thrown out soon. The Army’s announcement makes it the final military service to lay out its discharge policy for vaccine refusers. The Marine Corps, Air Force and Navy have already discharged active-duty troops or entry-level personnel at boot camps for refusing the shots. So far, the Army has not discharged any. According to data released by the Army last week, more than 3,300 soldiers have refused to get the vaccine. The Army has said that more than 3,000 soldiers have been issued official written reprimands, which suggests they are already identified in the disciplinary process, and some of them could be among the first to be discharged.

Defense Secretary Lloyd Austin last year ordered all service members — active-duty, National Guard and Reserves — to get the vaccine, saying it is critical to maintaining the health and readiness of the force. The military services had varying deadlines for their forces, and the Army National Guard was given the longest amount of time to get the shots, mainly because it’s a large force of about 330,000 soldiers who are widely scattered around the country, many in remote locations.

The Army Guard’s vaccine percentage is the lowest among the U.S. military — with all the active-duty Army, Navy, Air Force and Marine Corps at 97% or greater and the Air Guard at about 94%. The Army reported Friday that 90% of Army Reserve forces were partially or completely vaccinated.

The Pentagon has said that after June 30, Guard members won’t be paid by the federal government when they are activated on federal status, which includes their monthly drill weekends and their two-week annual training period. Guard troops mobilized on federal status and assigned to the southern border or on COVID-19 missions in various states also would have to be vaccinated or they would not be allowed to participate or be paid.

To make it more complicated, however, Guard soldiers on state activate duty may not have to be vaccinated — based on the requirements in their states. As long as they remain in state duty status, they can be paid by the state and used for state missions.

At least seven governors formally asked Austin to reconsider or not enforce the vaccine mandate for National Guard members, and some filed or signed on to lawsuits. In letters to the governors, Austin declined, and said that the coronavirus "takes our service members out of the fight, temporarily or permanently, and jeopardizes our ability to meet mission requirements." He said Guard troops must either get the vaccine or lose their Guard status.

Jensen and Maj. Gen. Jill Faris, director of the Guard’s office of the Joint Surgeon General, said they are working with states adjutants general to get progress updates, including on the nearly 20,000 troops who are not flat refusals and haven’t submitted any type of exemption request. Some, they said, may just be a lag in self-reporting, while others may still be undecided.

"Part of those undefined are our soldiers who say, well, I have until 30 June and so I’ll take till 30 June," said Jensen.

Others may have promised to bring in vaccine paperwork, and haven’t done it yet. Still others are on the books, but haven’t yet reported to basic training, so don’t have to be vaccinated until they get there. It’s not clear how many are in each category.

"For the first time now, in this pandemic, nearly every American can now have access to life-saving vaccines. And we're ready," President Joe Biden said on Tuesday from Washington, D.C.

Jensen acknowledged that if the current numbers hold, there are concerns about possible impact on Guard readiness in the states, including whether it will affect any Guard units preparing to deploy.

"When you’re looking at, 40,000 soldiers that potentially are in that unvaccinated category, absolutely there’s readiness implications on that and concerns associated with that," said Jensen. "That’s a significant chunk."

Overall, according to the data obtained by the AP, about 85% of all Army Guard soldiers are fully vaccinated. Officials said that if those with one shot are counted, 87% are at least partially vaccinated.

Across the country, in all but one case, Guard soldiers are vaccinated at a higher rate that the general population in their state. Only in New Jersey is the percentage of vaccinated Guard solders very slightly lower than the state’s overall population, as of earlier this month when the data was collected.

The three U.S. territories — Virgin Islands, Guam and Puerto Rico — and the District of Columbia, all have more than 90% of their soldiers fully vaccinated. The highest percentage is in Hawaii, with nearly 97%, while the lowest is Oklahoma, at just under 70%.

Guard leaders in the states have run special shot programs, and provided as much information as possible to their forces in order to keep them on the job.

In Tennessee, they set up small teams in the east, west and central regions and did monthly events providing vaccines to troops who wanted them. And every Wednesday, Guard members could make appointments for shots in the middle Tennessee region, in Smyrna. In addition, in early June they called in all soldiers who have so far refused the vaccine.

"We held a big, mass event," said Army Guard Col. Keith Evans. "We had all of our medical providers here. So if there were any questions to clear up, any misconceptions, any misinformation, we had all of our our data and were able to provide them all the information."

Evans, who is commander of his Army Guard’s medical readiness command, said they also had recruiting and other leaders there who could explain what would happen if soldiers chose to not get the shot and ended up leaving the Guard.

"We wanted to let them know what benefits they had earned because these are soldiers that had had done their time, served their country," said Evans.

Officials say they believe the information campaign has been working. Jensen said that about 1,500 soldiers a week around the country are moving into the vaccinated category. "We expect, as we approach the deadline, that we’ll see some some larger growth."