Brigham Young University-Idaho administrators believe that students aimed to get infected by the coronavirus so that they could get paid for donating plasma that contains COVID-19 antibodies.

LONDON - Wales has become the second nation in the United Kingdom to lock down large swaths of its economy to combat rising coronavirus infections, even as British Prime Minister Boris Johnson is resisting loud calls to do the same throughout England.

Wales' First Minister Mark Drakeford said Monday that his administration was backing a short, sharp “firebreak” to slow the spread of COVID-19. All non-essential retail, leisure, hospitality and tourism businesses will close for two weeks beginning at 6 p.m. Friday — a lockdown similar in scope to the U.K.-wide measures imposed in March.

“This is the moment to come together to play our part in a common endeavor to do everything we can together to protect the (National Health Service) and to save lives,'' Drakeford said. 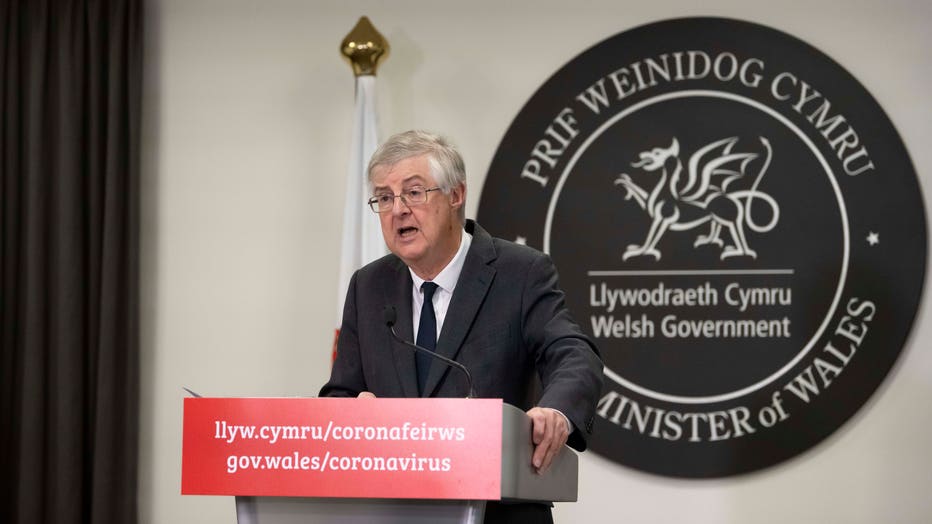 First Minister of Wales Mark Drakeford speaks during a press conference after the Welsh cabinet announced that Wales will go into national lockdown from Friday until Nov. 9, at the Welsh Government building in Cathays Park on Oct. 19, 2020 in Cardiff

Àuthorities across the U.K. are imposing new restrictions on business and social interactions as COVID-19 infections rise throughout all age groups and parts of the country, filling hospital beds and intensive care wards. One of their main goals is to reduce the strain on the NHS ahead of the winter flu season.

Public health experts say a lockdown can help reset the pandemic at a lower level, giving doctors time to treat the ill and providing breathing room for the government to improve its response. Britain has the deadliest coronavirus outbreak in Europe, with over 43,700 confirmed deaths.

“The benefit will be seen in the weeks that follow,'' Drakeford said.

Northern Ireland has already ordered schools to close for the next two weeks, banned most social gatherings and shut down many businesses including bars and restaurants for a month.

The Welsh decision came as officials in Greater Manchester continue to reject efforts by Johnson's Conservative government to move the region into the highest level of restrictions in the three-tier system Johnson unveiled for England a week ago. While the government’s scientific advisers have recommended a short national lockdown, Johnson says his tiered, regional approach limits the economic and social damage from the pandemic on areas where infection rates are lower.

Johnson’s government says the talks with authorities in Manchester must be completed Monday because the public health situation is deteriorating, but local officials are holding out for more financial assistance for those hurt by the restrictions.

Sean Fielding, a council leader in the Manchester area, told the BBC that local leaders are trying to protect residents from the government’s “untested” strategy. Fielding said he favors a short national lockdown instead.

“The logical solution, to me, seems to be to take the advice of your national scientific advisers, do the short-term circuit-breaker lockdown, which will be much less painful because it will be for a shorter period," he said. "It will be cheaper in the long run as well, because you will only have to provide that financial support for those few weeks whereas this could run on and on and on beyond Christmas.”

Talks between Greater Manchester officials and Communities Secretary Robert Jenrick went on all weekend and Johnson has threatened to impose the measures unilaterally if an agreement can’t be reached.

“We’ve set out the action that we think is appropriate, but we’re also willing to continue and have final discussions with council leaders and the mayor in Greater Manchester today to see if we can reach an amicable agreement, because we think that that is the most effective way of proceeding,” Jenrick told the BBC.

Greater Manchester Mayor Andy Burnham told Sky News that a deal was not just about the “size of the check.’’ Local officials want to protect low-paid workers, self-employed people and businesses that may collapse under the restrictions, he said.

“We’ve always said we would put people’s health first, and we will do that,” he said. “But health is about more than controlling the virus — people’s mental health, I think, is now pretty low given that we’ve been under restrictions here for three months already.”

Under the U.K.’s system of devolved government, the regional administrations in Northern Ireland, Scotland and Wales control health policy in their areas and the U.K. government makes the rules for England.

Johnson’s three-tier strategy applies only to England, but he says he will coordinate with the devolved administrations in other parts of the U.K.

“We have worked closely with the devolved administrations at every step of the pandemic response and we will continue to do so," said James Slack, the prime minister's spokesman. “I think there are more similarities in our approaches than there are differences.”

“The prime minister continues to believe that targeted local action in those areas with high prevalence of the virus is the correct course” for England, he said.