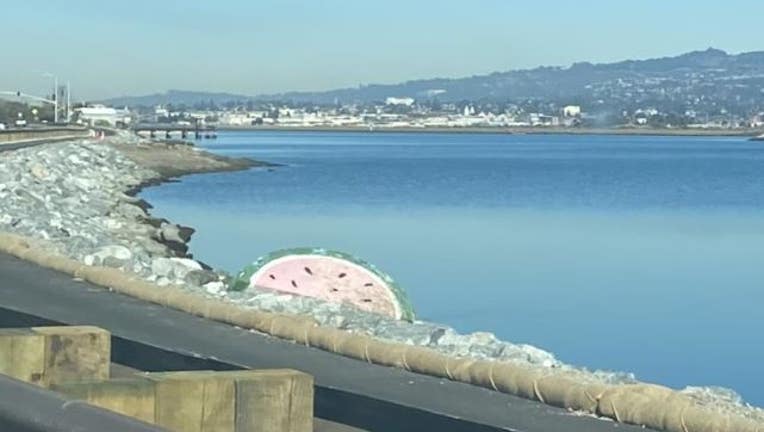 'Watermelon Rock' sits off Doolittle Drive, along Martin Luther King Jr. Regional Shoreline. It can be seen as you drive toward Bay Farm in Alameda.

OAKLAND, Calif. - If you live in Alameda or Oakland, chances are you have seen it: Watermelon Rock. It's the painted slab of cement that sits off the water on Doolittle Drive as you drive toward Bay Farm.

The infamous slice of fruit has been in the same spot for decades, so when it went missing over the summer many took to social media to try and find it.

"The watermelon is no longer," lamented one writer on the Facebook group, Fans of Watermelon Rock. "Save the watermelon!" wrote another.

For those who grew up in Alameda, it's more than just a roadside attraction. It's a landmark that has been part of the shoreline as long as they can remember. It's a familiar site they pass every time they drive home. In short, it's a part of their upbringing.

So when it disappeared over the summer, it caused great concern. 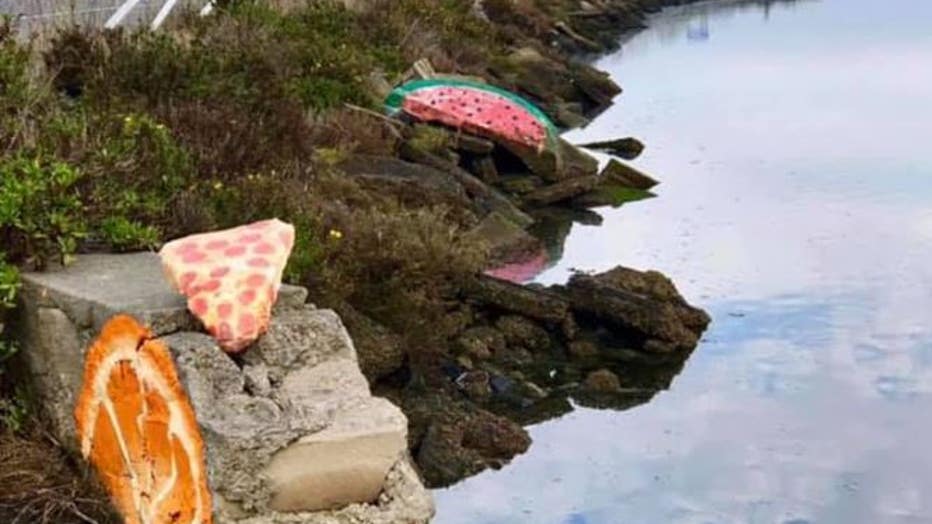 Watermelon Rock has had various food company over the years. An orange slice and a piece of pizza, also painted rocks, are seen in this photo from 2018. Photo credit: Fans of Watermelon Rock, Facebook group.

Last week, a member of the group posted that Watermelon Rock was back, showing a photo of it resting close to where it was before.

"It's back," said Teresa Kosinkski in a post on Saturday. "Needs refreshing, but nice to see."

It seems a construction crew had temporarily moved it during a renovation of the sea wall along the shoreline. The crew apparently kept the rock safely stored during months of construction.

According to a 2012 article by Alameda Patch, Watermelon Rock was first painted on May 4, 1983 by Sandra Gibson and her friend as an orange slice. It changed to a watermelon wedge shortly after and has been given a fresh coat of paint periodically over the years.

Watermelon Rock has had various food company over the years. An orange slice and a piece of pizza, also painted rocks, showed up around 2018. It's not clear who is adding the different food rocks, or who does the touch-ups of the original.

Alamedans apparently have different routines every time they pass Watermelon Rock. One family said if you believe in love, you should wave at it every time you drive by. Another said it brings luck to everyone who passes.

When one resident was looking for the exact location of the rock, another replied, "Where is the watermelon located? Well duh: In our hearts!"