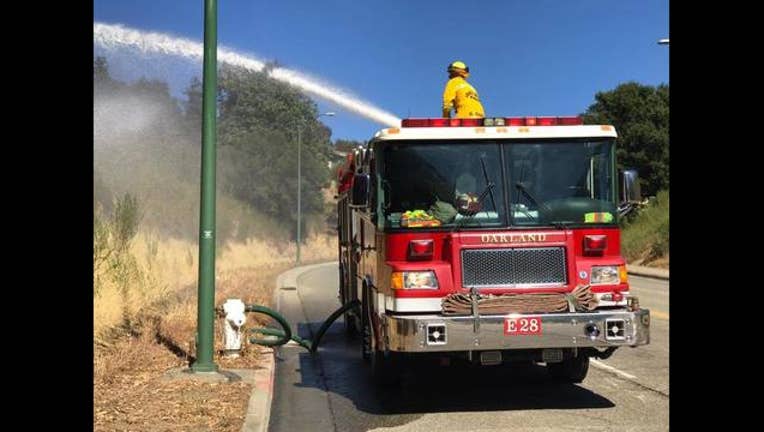 OAKLAND, Calif. - A black firefighter inspecting homes in the Oakland hills for safe fire practices was videotaped by two skeptical neighbors and reported to police by one of them.

While the firefighter and many of his colleagues feel that racism was the catalyst behind the suspicion, many others say it’s perfectly OK for neighbors to be on the lookout for strangers in their neighborhood and to communicate those concerns to each other and the proper authorities.

“Someone always wants to stir the pot,” Carol Sensedorf of Orinda told KTVU on Monday. “I consider myself liberal, 100 percent. But there is so much robbery and it all goes on Next Door. Someone literally posted ‘Did anyone see a man in yellow vest?’ the other day. It turned out to be someone from PG&E. We call on everybody. It doesn’t mean you’re racist. It means you have your eyes open. I call on people all the time whatever color they are.” Not every act is inspired by racism or sexism, she said.

Sean Fitzpatrick wrote on the Oakland firefighters union Facebook page that the Oakland hills has a “high rate of property crimes… and home burglaries are at the top of the list.” He added, “Often, criminals wear official-looking gear and have fake ID so they can gain entry into a home, or "case" the property without drawing attention. In this case, the homeowner appears to have gone overboard, but I can understand the extra caution. To assume this incident was racially motivated, based on the information provided, is absurd, but typical.”

In a story first reported by the San Francisco Chronicle, Oakland firefighter Kevin Moore was conducting fire inspections on May 16 in the Montclair neighborhood, a mostly white, affluent area in the fire-prone Oakland hills.

Moore, who by law is allowed to walk around the perimeter of a resident’s home to assess fire safety, told the Chronicle that he understands why people in Oakland, or anywhere, would be suspicious if they find a stranger walking on their property.

But he told the paper that he was dressed in uniform and called out, ‘‘Hello! Hello! Oakland Fire Department!’ Because I want to be heard. I just don’t want somebody to look out their window and see somebody in their backyard. I’m not trying to be incognito.”

But on this particular day last month, a resident emailed home security footage to the Oakland police community liaison officer for the upscale Montclair hills neighborhood. Then on Monday, Moore was out again conducting inspections and found a resident video-recording him on a cell phone and then asked for ID. The video has not been released.

Moore’s partner, Megan Bryan, who is white, told the Chronicle said the incident made her frustrated and annoyed, because no one had ever called the police on her or other white firefighters for doing an inspection.

Every summer in the city, firefighters fan out to the Oakland hills to do vegetation-management inspections in which they check for hazards like tree limbs hanging over chimneys or a buildup of dead plants. The goal is to lessen the chances of a wildfire spreading out of control from house to house by creating a “defensible space” on every property.

Firefighters typically try to speak with residents before they enter their yards, knocking on doors or ringing doorbells. If no one is home, the firefighters are supposed to do the inspection anyway, going through side yards and backyards, if they can, while taking photos and notes.

In a phone interview with KTVU, Dan Robertson, president of the Oakland firefighters union, said that this type of suspicious behavior has gone on for years.

“It’s happened occasionally to me personally as well,” Robertson said Monday. “People have refused to let me in, too.

He added: “It’s disappointing that we have to deal with this sort of thing in  place that we believe is open and nonjudgmental in the Bay Area, and in particular, in Oakland. We’re fooling ourselves if we think we think racism doesn’t exist here.”