OAKLAND, Calif. - The Oakland Raiders fan who slipped off a BART platform and was miraculously scooped up by an alert supervisor has now been tasked with a tall order.

“He told me to pay it forward,” Rayshawn Jackson said, recounting what BART supervisor John O’Connor told him on Sunday evening, after pulling the Rancho Cordova man to safety, seconds before a train nearly hit him.

Jackson, who was talking on his cell phone when he slipped and fell, said he’d comply.

“I'm going to start reaching out to people who need help,” Jackson said.

Rayshawn Jackson, who was saved this week after he fell off a BART platform at the Oakland Coliseum by John O'Connor says he feels very lucky.

O’Connor’s act of heroism received much attention this week, with BART swiftly holding a news conference to to tout the employee’s life-saving actions. O’Connor, for his part, remained humble, saying he thanked God he was there at the right time, but that he was just doing his job.

BART rider Tony Badilla took video of O’Connor and Jackson hugging emotionally afterward, which originally propelled the feel-good story. That hug is when O’Connor told the stranger he just saved to appreciate what had just happened and to do something good for others.

Before the hug, Jackson said he got separated from his friends after the Raiders game against the Detroit Lions and was looking for them at the Coliseum station to go home. He was talking to one of them on his cell phone when the station's camera on the platform caught his misstep. He also acknowledged he had been drinking, Fox40 reported. 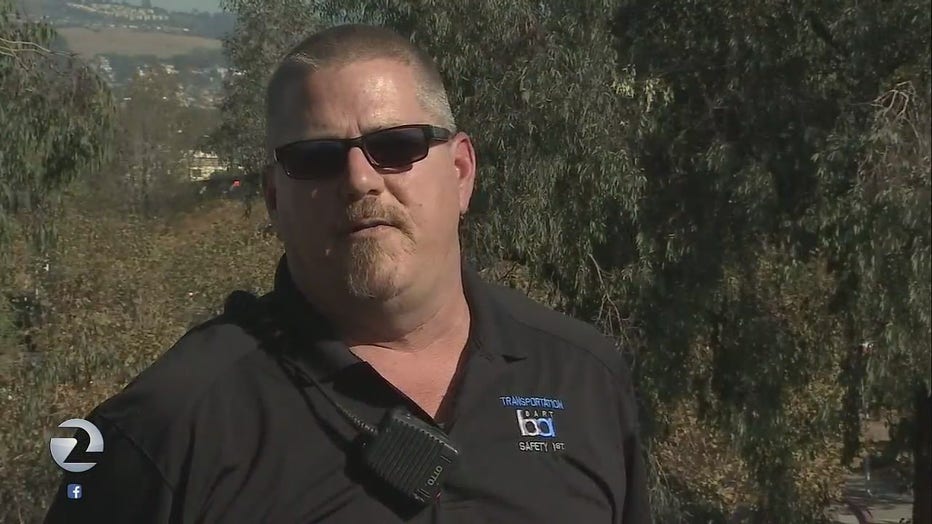 As for the man who caught him?

“It was like an angel in the outfield, grabbed me and pulled me to safety, man," Jackson said of O’Connor.

Since then, Jackson said he's been contacted by friends and family from all over the country. BART officials have invited him to meet up with O'Connor on Saturday for the Cal Berkeley football game.

Jackson hopes to see O’Connor at the game, this time under better circumstances. And he vowed to try to honor O’Connor’s request, because he doesn’t want to waste his second chance.

A BART supervisor is being hailed a hero after he noticed a rider fall from a platform and grabbed him just as an oncoming train was approaching the station. Watch this dramatic video from BART.

Eric Rucker of Fox40 contributed to this report.