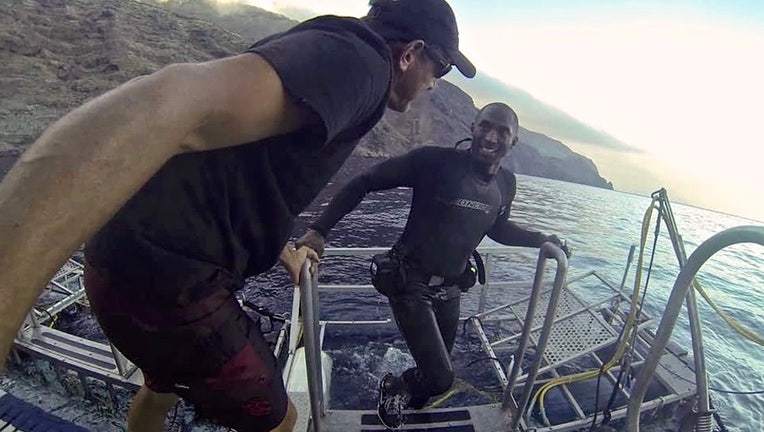 LOS ANGELES - Who knew Kobe Bryant was interested in sharks? Let alone that he actually got in the ocean water, with possibly the most feared type – white sharks!

It’s true, check out the photos from SharkDiver in Southern California.

In the fall of 2013, Kobe hooked up with Martin Graf of the well-known conservation shark diving outfit in San Diego. They were on one of his boats off Guadalupe, a Mexican volcanic island, about 150 miles west of Ensenada. The remote site is known as one of the best places for close encounters with huge white sharks, which is exactly what Kobe did.

The basketball star, wearing his own Nike sneakers because his feet were too large for the booties SharkDiver gives you with their wetsuits, got inside a cage in the 200+ foot deep waters of the Pacific.

Using a hookah attached regulator to breathe air, he was lowered into the ocean, where he got to see the huge predators swimming around him. Graf says Kobe told him he had been fascinated with sharks since he was a kid living in Italy, adding that it was “nice having a conversation with him that had nothing to do with basketball or being famous -- just a couple of guys talking sharks”.

When they heard about the tragic helicopter crash that killed Kobe, his 13-year-old daughter, and seven friends, they were devastated, as were the folks at the Marine Science Conservation Institute, which tracks the white sharks of Guadalupe through the MCSI White Shark Photo Identification Guide.

In his honor, Shark No. 24 has now been renamed, Kobe Bryant. Check out the photo on their Instagram post -- it’s a 12-foot youngster, about 10 years old, and in good company.

Other sharks have been named after Jacques Cousteau (Jacques) and The Legend, after US Navy Seal Chris Kyle. They didn’t release the information until now because it didn’t seem right to do so. Shark Diver’s Cindy Michaels says that naming a shark just seemed like the right thing to do as he will be forever remembered in a special way by his fellow shark divers and the shark diving community.