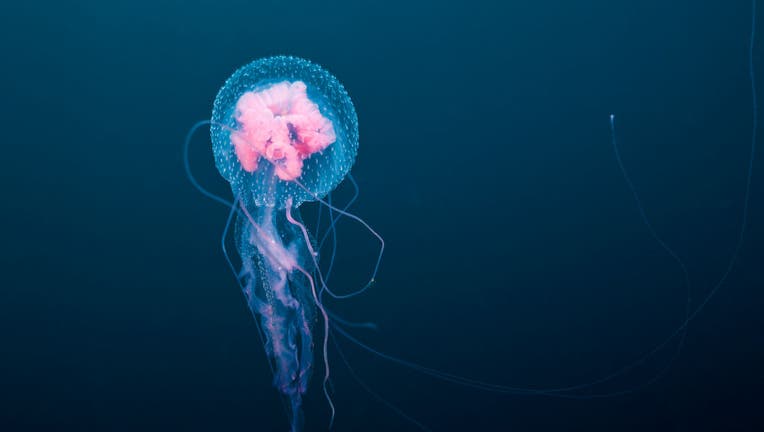 Hurricanes and other coastal storms often warn of floods, rip currents and… jellyfish.

Though a seemingly odd part of a storm experience, large numbers of jellyfish are a common sight being washed up on beaches or floating near the coastline when offshore storms blow in.

Most other sea creatures don’t make such an appearance – so what makes the jellyfish different? The answer is both simple and complex and involves the animal’s biology and behavior.

"Some of them have the ability to move around somewhat to direct their movement a little bit, but in general, they’re going to go where the current goes," he noted.

HOW TO WATCH FOX WEATHER ON TV

According to Sasson, jellyfish do not have strongly defined muscles, nor do they have brains as developed as those in fish and other types of marine life. While fish can swim away from ocean currents caused by storms, most jellyfish aren’t powerful enough.

Additionally, many jellyfish swim close to the ocean’s surface, making them more vulnerable to the whims of the weather.

"If you're closer to the surface where the wind is, where the waves are, and the currents are, you're more likely to get washed ashore, while a lot of fish can just dive deep to where [the currents are] not quite as strong," Sasson said.

Jellyfish join other sea life, such as starfish and sand dollars, who are passively brought to the shore by the weather-moving ocean currents.

Having hoards of jellyfish close to shore can pose problems for beachgoers, who are often stung by the sea creatures, particularly during the summer. This is because storms are more active during the summer, which creates powerful currents that carry jellyfish to shore.

Summer is also when jellyfish reproduce, according to Sasson. Because of this, large numbers of adult jellyfish can be found together during this time of year.

A combination of large numbers of jellyfish and a prevalence of storms washing the jellyfish close to shore often leads to outbreaks of beachgoers being stung by jellyfish.

"Understanding those connections may be helpful when people are at the beach or see [the jellyfish] to know this is a natural process that happens, and it's a cyclical process," Sasson said.

Read more of this story from FOX Business.