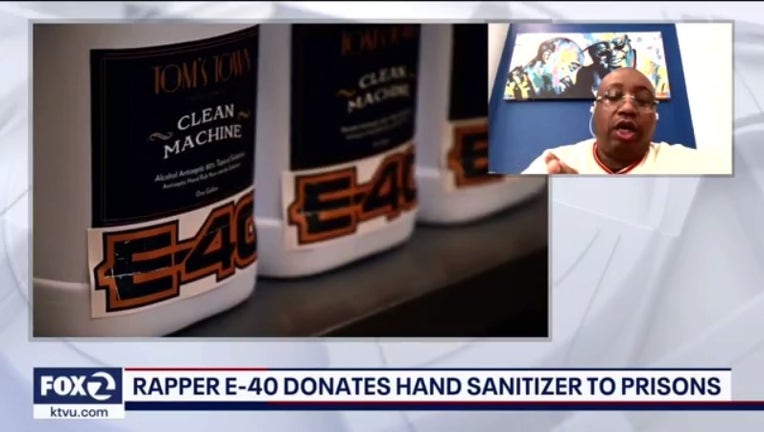 SAN QUENTIN, Calif. - Rapper E-40 made headlines in May when he said he planned to donate 1,000 gallons of hand sanitizer to San Quentin and Lompoc prisoners, hoping the cleaning solution would help disinfect skin and surfaces in crowded cells.

But KTVU has learned that the hand sanitizer has not made it outside of its boxes and certainly not into the hands of incarcerated people, at least, not at San Quentin.

In an email, California Department of Corrections spokeswoman Dana Simas said while the prison system appreciates the community's desire to donate items to help address COVID-19, there are "detailed procedures for accepting donations that are laid out by department and California state government policies."

She wrote that San Quentin State Prison "still has the items, but the institution has received ample donations in addition to the hand sanitizer being produced by the California Prison Industry Authority that is being provided to both staff and in the incarcerated population statewide."

Without providing details, Simas added: "Unfortunately, the donation was not submitted in accordance with these policies."

Simas did provide a general sheet of information that San Quentin administrators must consider before accepting donations.  One criteria is that prison officials must "consider the perception of the acceptance to other suppliers. How does the department remain fair and impartial if a decision is eventually made to solicit the product?"

Lompoc is a federal prison, not state, like San Quentin. And it wasn't immediately clear if the donation had been accepted there.

Adnan Khan, executive director and co-founder of Re:Store Justice, first broke the news on Twitter, when he said he learned from speaking to at least two dozen incarcerated people at San Quentin that they hadn't received E-40's Tom's Town hand sanitizer. Khan is from the Bay Area and is an E-40 fan, so he was excited to follow the progress of the hand sanitizer donation.

Khan also spent 16 years of his life in prison, the last four at San Quentin and was released under a new felony murder legislation in January 2019. He still has many friends there.

Since the exact details of why E-40's donation was not accepted, the internet speculated: It's probably because of the alcohol in the sanitizer.

E-40 and a representative from Tom's Town distillery told KTVU on Thursday that this was the first they are hearing of this and they are genuinely confused as to why the why prison says their sanitizer doesn't comply.  The alcohol in the sanitizer, they pointed out, is also rubbing alcohol, not the kind you drink.

When E-40 first came up with the idea of donating the hand sanitizer, he said he could only imagine the prisoners' anxiety, living in such tight quarters with limited social distancing, and he wanted to do something to help.

As of this week, 51 incarcerated people have died in California prisons.

Both the rapper and the company said they worked closely with government and prison officials to make sure their sanitizer met FDA and state correctional standards and guidelines. They also said they filled out the necessary paperwork that they were given.

E-40 said he hopes to get more answers as to what happened so that his gift can get into the hands of those who need it most right now.

His intention from the beginning, he said, was to do some good in the world and to save lives.