PINE, Colo. - Wildlife officials in Colorado say an elusive elk that has been wandering the hills with a car tire around its neck for at least two years has finally been freed of the obstruction. 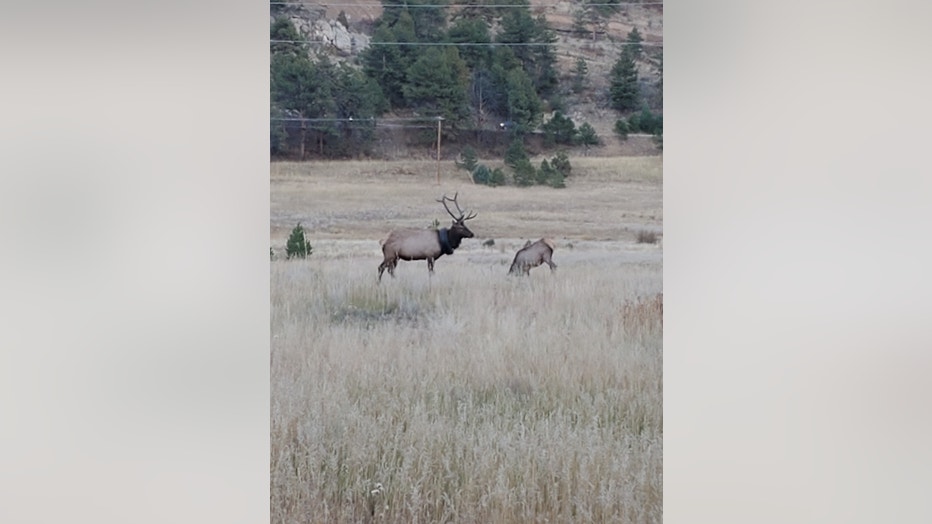 Prior to wildlife officers removing the tire from the bull elk, it was spotted multiple times for more than two years roaming around with the obstruction round its neck. (Colorado Parks Wildlife )

The 4 1/2-year-old, 600-pound (270-kilogram) bull elk was spotted near Pine Junction, southwest of Denver, on Saturday evening and tranquilized, according to Colorado Parks and Wildlife. Officers with the agency had to cut off the elk’s five-point antlers to remove the encumbrance because they couldn’t slice through the steel in the bead of the tire.

SEE ALSO: Rise in bear sightings in the North Bay

Even after cutting the antlers off, "It was tight removing it," Officer Scott Murdoch said. "We would have preferred to cut the tire and leave the antlers for his rutting activity, but the situation was dynamic and we had to just get the tire off in any way possible," Murdoch added.

He and fellow officer Dawson Swanson estimated the elk shed about 35 pounds (16 kilograms) with the removal of the tire, the antlers and debris inside the tire. "The tire was full of wet pine needles and dirt," Murdoch said. "So the pine needles, dirt and other debris basically filled the entire bottom half of the tire. There was probably 10 pounds of debris in the tire."

The officers said that despite the fact that the elk had been wearing the tire for years, they were surprised by the relative good condition of the animal's neck.

"The hair was rubbed off a little bit, there was one small open wound maybe the size of a nickel or quarter, but other than that it looked really good," Murdoch said.

Saturday's successful removal mission came on the fourth attempt just that week to tranquilize the elusive elk. "Tranquilizer equipment is a relatively short-range tool and given the number of other elk moving together along with other environmental factors, you really need to have things go in your favor to have a shot or opportunity pan out," Swanson said. "It was not until shortly before dark that everything came together and I was able to hit the bull with the dart."

Wildlife officers first spotted the elk with the tire around its neck in July 2019 while conducting a population survey for Rocky Mountain bighorn sheep and mountain goats in the Mount Evans Wilderness. "…this elk was difficult to find, and harder to get close to," officers noted.

They suspect the now freed elk got stuck with the tire either when it was young before it grew antlers or during the winter when it shed its antlers.

Officers said this case served as a reminder for residents to keep their property free of objects that can harm wildlife.