Following a delay in releasing the numbers, the $1.9 billion Powerball numbers were drawn Tuesday morning.

ALTADENA, Calif. - The grand prize for the $2.04 billion Powerball jackpot is going to someone in California, lottery officials said, making that person the winner of the largest lottery in history.

At some point, the winner's name will be known. The state of California does not allow lottery winners to hide their identities.

For selling the winning ticket, Joe’s Service Center will receive a maximum Powerball bonus of $1 million.

Owner Joe Chahayed is a Syrian immigrant who came to the U.S. in 1980. He wants to help his family and others with his million dollar prize.

"I raised my family, I raised my kids, I helped my grandchildren… Now I'd like to help somebody else too," he said.

In San Francisco's Noe Valley, 1001 Castro Street Market sold one of three winning tickets worth 1.1 million dollars each to someone who matched all 5 numbers, except the Powerball. Owner George Shatara said his son called him after KTVU informed showed up prior to receiving a call from California Lottery officials.

"He called me up and said, dad the news and everybody's here," Shatara said. "I feel good for the people who won it. Lucky person."

Shatara gets a $5,000 prize for selling a winning second-tier ticket.

"I have another store in North Beach for 42 years and nothing… not like this," he added.

Cathy Johnston, spokeswoman for the California Lottery, said California schools will receive $156.3 million from this jackpot and the all the rolls leading up to it.

"This is record-setting territory," Johnston said. "It's exciting, and I just can't wait to find out who won… We're hoping our winner will get some financial advice because this is a life-altering amount of money."

Following a Monday drawing delay, the winning numbers were drawn Tuesday morning at the Florida Lottery draw studio in Tallahassee. They were 10, 33, 41, 47 and 56, and the red Powerball was 10. 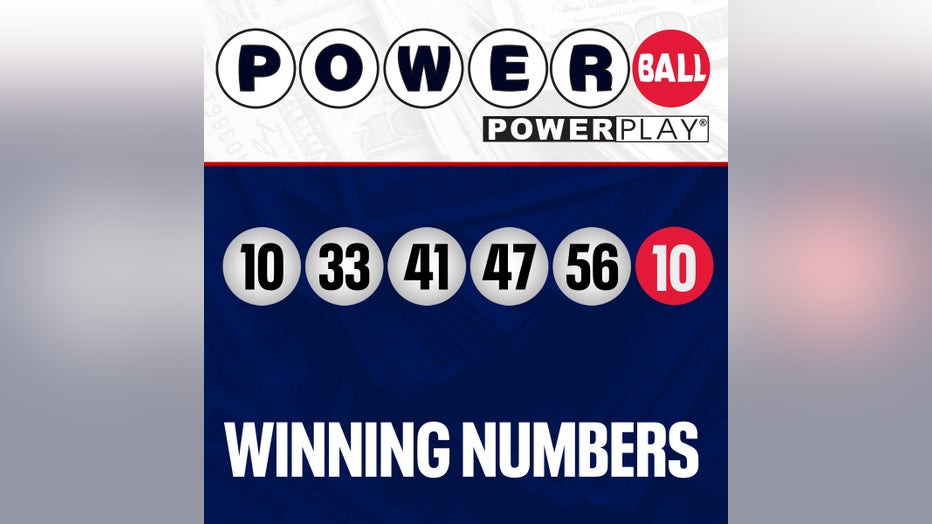 After taxes are deducted, the cash value is estimated to be $997.6 million for the lucky winner.

The winning numbers were selected Tuesday morning, nearly 10 hours after the scheduled Monday night drawing because of problems processing sales data at one of the game’s member lotteries in Minnesota. Lottery officials acknowledged the unprecedented delay for such a high-profile drawing but said the game’s security process took precedence.

"Protecting the integrity of the draw is of utmost importance, and we were able to do that during this historic drawing with the cooperation of all participating lotteries," said Drew Svitko, the chairman of the Powerball Product Group and executive director of the Pennsylvania Lottery.

There were plenty of other winners too, albeit of smaller amounts.

Lottery officials said a winner in Florida won the Power Play Match with a cash value of $2 million.

Per the Multi-State Lottery Association, more than 11.2 million tickets won cash prizes totaling $98.1 million, including 22 tickets that won $1 million prizes for matching the five white numbers but not the Powerball.

The $2.04 billion jackpot was by far the largest lottery prize ever won, topping the previous record $1.586 billion prize won by three Powerball ticketholders in 2016. Only four previous jackpots have topped $1 billion, but none of those are close to the current prize, which started at $20 million back on Aug. 6 and has grown over three winless months. No one has won the jackpot since Aug. 3.

The jackpot was initially reported as an estimated $1.9 billion on Monday, but the prize was increased to $2.04 billion Tuesday morning after updated calculations.

Powerball is played by charging $2 per ticket and having players choose five white balls between the numbers 1 to 69 and a red Powerball from the numbers 1 to 26. If a player gets all six numbers correct, they win the massive jackpot.

The odds of winning the jackpot by matching all 5 numbers and the Powerball number are 1 in nearly 293 million.

The game is played in 45 states, as well as Washington, D.C., Puerto Rico and the U.S. Virgin Islands.

This story was reported in Oakland, Calif.  The Associated Press contributed to this report.