OAKLAND, Calif. - Youth baseball programs in Oakland have long been known to produce some of Major League Baseball’s biggest names.

But in recent years, there have been increasing challenges to field teams as inner city youth baseball programs have been struggling to survive and as the game as a whole has seen sharp declines in Black players on the field. 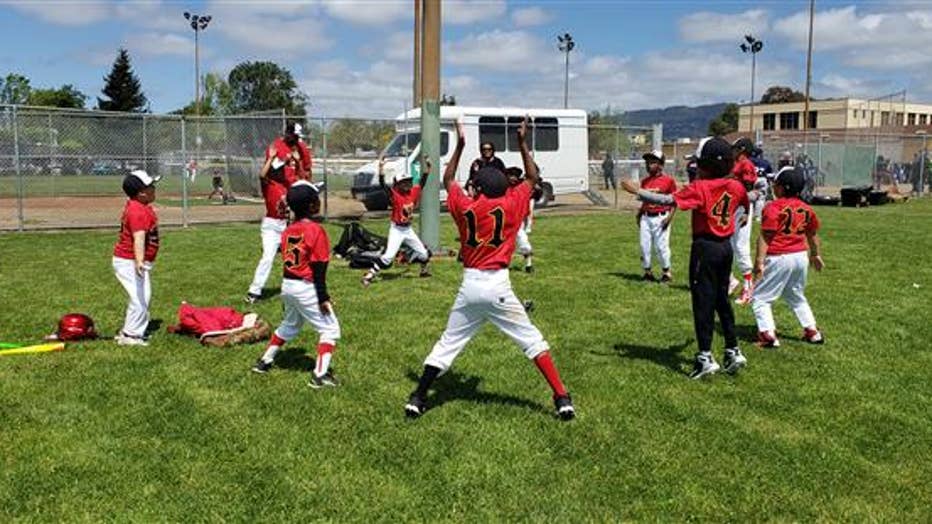 Some of the city’s powerhouse high schools that have historically had strong baseball programs have taken a major hit. "There’s a crunch to youngsters playing high school," said Oakland's Babe Ruth little league president Louie Butler, who added, "This is a real impact in Oakland."

Butler said schools like McClymonds, Castlemont, Oakland, and Fremont High have all been challenged with fielding a full team.

"Numbers are sadly shrinking in Oakland for high school baseball," said Oakland High’s baseball coach Harold Jefferson, who has been working on recruiting and trying to get students interested in joining the school's team.

Jefferson pointed to limited access to playing fields as one factor in the decline in youth baseball participation in his city.

"Field use is a challenge, and when they are available, it's hard to get on them, even with schools that have their own diamonds like mine. It is shared by outside activities not only on weekdays, but weekends as well," the coach shared with KTVU.

He also pointed to changing attitudes toward the game and a gravitation toward more fast-paced sports.

"In my humble opinion, baseball is not as sexy as it was in Oakland some years ago," Jefferson shared. "Baseball is a game that I'm noticing in my 31 years at Oakland High, that kids don't have the patience when they fail. Baseball is a game that is not meant for you to succeed in some ways, and it's slow… Baseball, you make an out, and the chances are pretty high you will do it again while waiting a long time to get a chance to redeem yourself. A lot of kids need immediate gratification for their efforts, and baseball is not the sport for that."

And the declines in participation among inner city youth were being seen at younger levels.

Programs like the long-running Babe Ruth League in Oakland was where the likes of Frank Robinson, Vada Pinson, Curt Flood, Dave Stewart, Rickey Henderson, Jimmy Rollins, Joe Morgan, Bip Roberts, Brian Johnson, and Tyson and Joey Ross – to name a few, honed their skills as boys, cultivated their love for baseball, and found their calling in the game.

At its peak, the Oakland Babe Ruth League had some 1,200 youth players but today has fewer than 250 kids on its rosters, with enrollment being hit especially hard by the pandemic.

The league was also once made up predominantly of African-American players. From the mid-80’s through the mid-90’s, Black players comprised roughly 92% of its members, according to Butler.

"Now we have 40 percent Black representation," said Butler, who's been involved in Babe Ruth since 1973 and has been president of the Oakland league for the last 15 years. Butler said it’s clear that the change in the youth league’s demographics mirrored the changing face of the city itself. 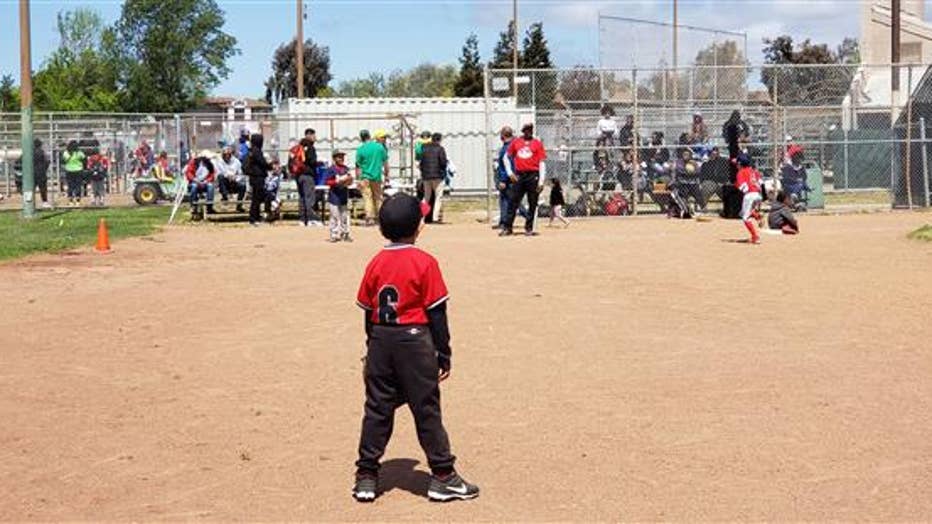 "As the dynamics of the city changed, then the people who participated changed. We’ve had a lot of people that have moved out of Oakland," Butler explained. "At one time that was predominately Black and so that’s why we had such an influx of players because we were right there."

Rising home prices and gentrification of neighborhoods have resulted in many families moving out. "Any time you do that, you move out people who are low income and those people move to surrounding cities," Butler explained. "You lose parents and you lose players."

Babe Ruth alumni including Henderson, Stewart, Roberts, and Johnson were among those making up MLB rosters during a time when Black representation was at its highest in professional baseball.

According to the Society for American Baseball Research, African-American players represented 17.4% in 1973, peaking at 18.7% in 1981, with those numbers remaining steady through the 90’s.

But in recent years, professional baseball itself has seen dramatic declines in Black players. An analysis by USA Today Sports found Black players made up 7.8% of MLB rosters last year.

"We’ve seen a decline on the major league level, of Black major leaguers. And our kids don't see as often, maybe as in the 90’s or the 80’s, they don’t see themselves at that level," said Robert Marcus, director of government and community engagement for the non-profit Coaching Corps. "I think that has an impact, of our kids not seeing themselves playing baseball on TV. It impacts how they embrace the sport," Marcus added.

Oakland-based Coaching Corps. is a national organization that seeks to ensure that kids in underserved communities have access to positive impacts from sports participation and high quality coaches. This summer the group launched its Racial Equity and Access in Youth Sports Task Force designed to "help level the playing field of youth sports as a powerful way to reduce systemic barriers facing kids in low-income communities of color."

Part of the unlevel playing field has been in large part due to pay-to-play costs that prevent many young athletes in underserved communities from participating in sports.

"When you look at the pay-to-play model and you look at cities like Oakland and L.A. and other cities, baseball has seemed to have digressed or evolved into a deal where you need to pay to play," Marcus explained.

From tournament costs to league registration and the big costs related to travel ball, a family can end up paying several thousand dollars a year per child.

"How are families supposed to pay to play to participate?" Marcus asked. "When the economic disparities are so profound the pay-to-play model limits youth participation drastically. It is not an environment that families can play in," he said.

Marcus noted that on top of that, families in affluent neighborhoods can get players ahead of the game by paying for specialized training, one-on-one coaching, and other additional instruction.

"There’s a whole industry that has evolved," Marcus said, adding, "It really affects the competitive balance." He said that often, that has led to kids from disadvantaged communities feeling discouraged, feeling that they can't compete, and dropping out of the sport.

To combat many of these barriers, Coaching Corp. has partnered with the Oakland Unified School District, Oakland Department of Parks, Recreation, & Youth Development, and other local entities to tackle what Marcus called "the disparity that is youth sports."

The decline of Black representation in baseball no doubt begins on the youth level, but there’s clearly a domino effect down the line at the highest levels. It’s an issue that has the attention of Major League Baseball, which itself has launched initiatives to help increase the number of Black players in the game. Earlier this summer, the league announced a donation of up to $150 million to the non-profit Players Alliance, to help build Black participation in baseball.

MLB has also established a youth outreach program known as Reviving Baseball in Inner Cities (RBI), which seeks to promote greater inclusion of youth from diverse backgrounds and increase participation and interest in the game among underserved youth.

"Sports have tremendous benefits to young people," said Marcus. "So I think it’s tremendously important that under-resourced, ‘inner city youth’ have the same access to these benefits as the kids who aren't in marginalized communities."

Butler said that despite the challenges his league has faced, he’s hopeful that things were turning around for Babe Ruth as it worked to bolster its coaching staff, implement new programs and had plans in place to incrementally increase player participation from year to year. 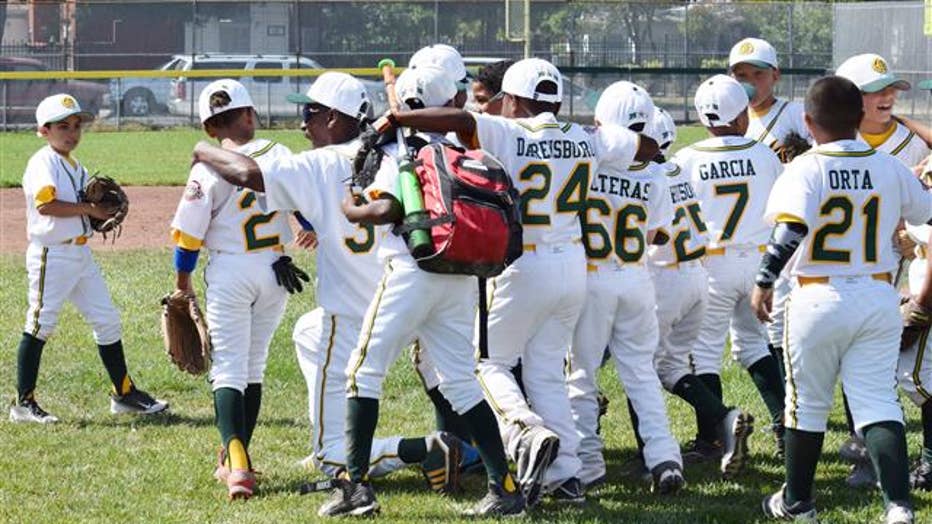 Photo of players from the Oakland Babe Ruth League's 2019 season. Youth baseball programs in Oakland are struggling to survive as the game as a whole has seen declines in Black representation.  (Oakland Babe Ruth)

The league had gotten up to 500 players before the coronavirus hit, but the pandemic derailed its rebuilding, so it's renewing its efforts, with hopes of adding 75 to 100 new players to its rosters every year.

"Baseball is one of the toughest sports to play. People need to recognize that," Butler said, "COVID hit, and when things occur it's a cycle that you go through. We are now turning a corner in that cycle."

That optimism was also felt by Oakland High's baseball coach, who said that the Oakland Athletic League's new commissioner, Franky Navarro, has acknowledged the participation problem and was working toward solutions. "I have a lot of confidence he has plans to improve in the area of low numbers with Oakland baseball in the high schools," Jefferson said, adding, "Sometimes, you have to tear things down, to build them up again."