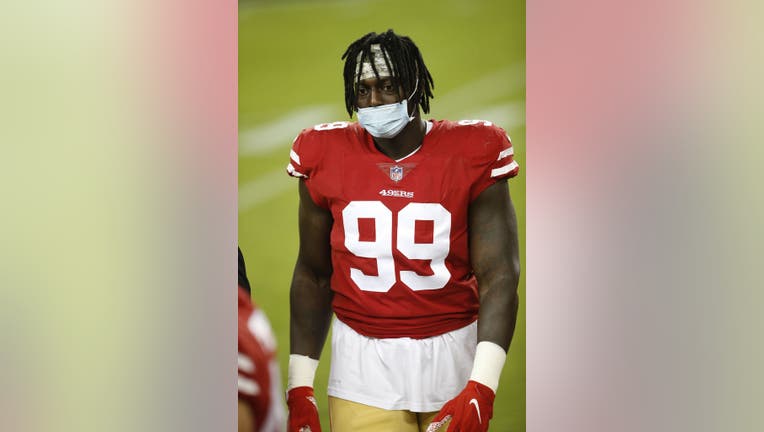 SANTA CLARA, CA - NOVEMBER 3: Javon Kinlaw #99 of the San Francisco 49ers before the game against the Green Bay Packers at Levi's Stadium on November 3, 2020 in Santa Clara, California. The Packers defeated the 49ers 34-17. (Photo by Michael Zagaris/

The team also placed defensive tackle Javon Kinlaw on the COVID-19 list Wednesday. Defensive lineman Arik Armstead went on the list earlier this week after a positive test and the team was conducting contact tracing to determine if anyone else needed to go on it as well.

The Niners tried to claim McKinley last week after he was waived by Atlanta but the Bengals beat them out. McKinley failed his physical in Cincinnati and San Francisco ended up with him anyway. He can join the team once he completes COVID-19 protocols and passes a physical.

McKinley was a first-round pick by the Falcons in 2016. He had 17 1/2 sacks, two passes defensed, two forced fumbles and one fumble recovery in 49 career games. He had one sack in four games this season.

The 49ers have a bye this week and return to play on Nov. 29 against the Los Angeles Rams.