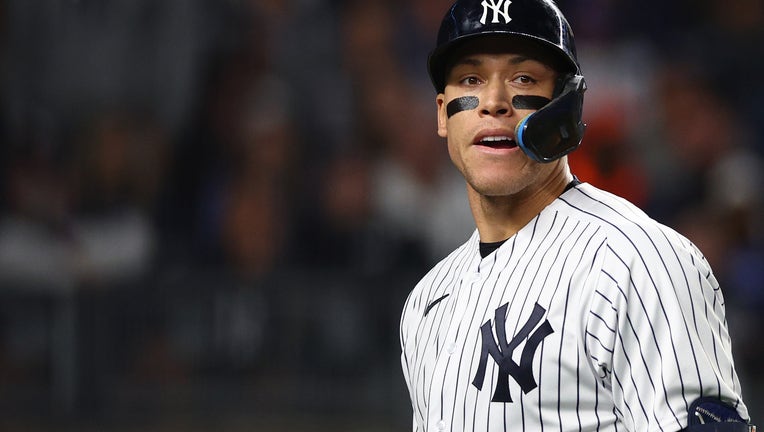 NEW YORK, NEW YORK - OCTOBER 22: Aaron Judge #99 of the New York Yankees reacts after striking out against the Houston Astros during the sixth inning in game three of the American League Championship Series at Yankee Stadium on October 22, 2022 in Ne

A video posted on Twitter, from the MLB Network, shows Judge walking through the lobby of a San Francisco hotel. Judge, the reigning American League MVP and single-season homerun king, is a free agent priority for the Giants. The 30-year-old reportedly met with the team on Tuesday.

Though, the person recording the video asked Judge what is doing in the city. Judge, who is from Linden- 100 miles east of San Francisco, said he is "visiting dome friends and family, that's about it, that's about it." He followed up the answer with a wink.

SEE MORE: World Cup: Here are the best places to watch the games in the Bay Area

Fans have been pointing out Judge's subtle facial hair in the video. The New York Yankees have a famous appearance policy that has in place since the 1970's. The rule bars players, coaches and male executives from dawning facial other than a mustache, with an exception for religious reasons.

Before last season, Judge turned down a $213.5 million extension offer from the Yankees.

Ike Shehadeh, the owner of Ike's Love and Sandwiches tweeted at Aaron Judge and said if he signs with the Giants, Judge will get free sandwiches-- for life.