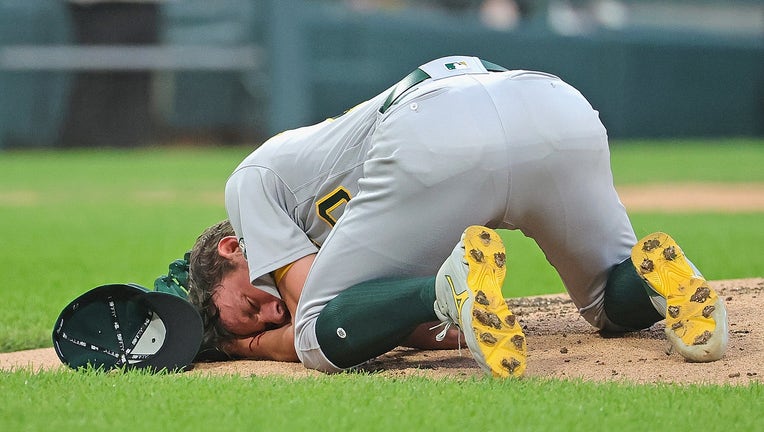 CHICAGO, ILLINOIS - AUGUST 17: Starting pitcher Chris Bassitt #40 of the Oakland Athletics lies on the ground after being hit in the head by a line drive from Brian Goodwin of the Chicago White Sox in the second inning at Guaranteed Rate Field on Aug

OAKLAND, Calif. - His right eye still swollen and bruised after being hit in the head by a line drive last week, Oakland Athletics ace Chris Bassitt is intent on pitching again this season.

That might be difficult considering there’s barely more than a month left in the season, but Bassitt isn’t ready to rule anything out.

"The doctors made a mistake in telling me that I’m going to be OK in a couple weeks," Bassitt said while sitting in the A’s dugout before Saturday’s game against the New York Yankees.

"When they said that, I said, ‘All right, we’re rocking.’ Obviously the front office and (manager Bob Melvin) and those guys are going to do everything to take care of me. But if everything progresses the way it should, I want to be back before the end of the season and hopefully I am," he said.

Bassitt met with the media four days after surgery to repair a fractured cheekbone suffered when he was struck by a 100 mph line drive off the bat of Brian Goodwin of the Chicago White Sox on Aug. 17.

Bassitt was carted off the field and taken to a hospital in Chicago, where he received stitches for cuts in his face and was diagnosed with a displaced tripod fracture in his right cheek.

After undergoing surgery at Rush University on Tuesday, Bassitt traveled back to the Bay Area on Friday and rejoined his teammates on Saturday.

"It’s just as medicinal for him as it is for us to be around the guys and feel like you’re not sitting in a room somewhere rehabbing," Melvin said. "If you’re around the guys maybe there’s just a little bit of mojo that helps the process."

Bassitt, who has a barely noticeable thin scar from the surgery, has no memory of the incident.

Before getting hurt, the 32-year-old righty was the best pitcher for the playoff-contending A’s, going 12-4 with a 3.22 ERA to go with 154 strikeouts in 151 innings. His wins are still tied for second-most in the AL.

Melvin said he considered having Bassitt take the lineup card out to umpires for Saturday’s game but decided against it.

The A’s manager also thinks it’s going to be difficult for Bassitt to pitch again this season.

"We’re going to probably have to rein him in, but we’re not going to do anything that the medical professionals, the doctors and the trainer say that he shouldn’t be doing," Melvin said. "He knows that, too."

"He’s also a starter. To try to ramp up to get another start based on when he’s able to start throwing again? I don’t know if there’s time enough for that. Really and truly if he gets on a mound and throws and feels good by the end of the season, that would be enough for him to have confidence going into next year. But I don’t put anything past him," he said.