SAN FRANCISCO - The San Francisco Giants released their tentative 2021 regular-season schedule on Thursday, just two weeks before starting a shortened season that will be like no other.

For the 12th consecutive year, the Giants will get started on the road when they travel to Seattle, marking their first-ever opening game at an interleague ballpark. After a three-game series in San Diego April 5-7, the Giants return to San Francisco for their home opener against the Colorado Rockies on April 9.

The 2021 schedule features just one three-city road trip and only two homestands with eight games or more. They'll face each team in the National League West Division 19 times. Against the Dodgers, they'll be at home for nine games and in Los Angeles for 10. 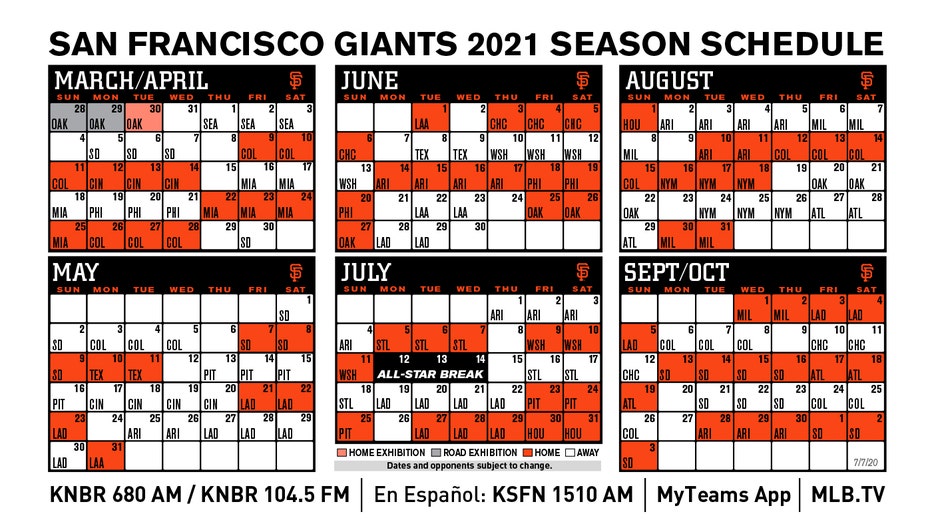 Prior to the start of the season, the Giants and A's will battle in the Bay Bridge series with three exhibition games on March 28-20. Then in interleague play, the Giants will host the A's June 25-27 and will travel to the Coliseum August 20-22. They'll also host Mike Trout and the Los Angeles Angels May 31-June 1 and travel to their house on June 22-23.

Game times have not yet been announced.