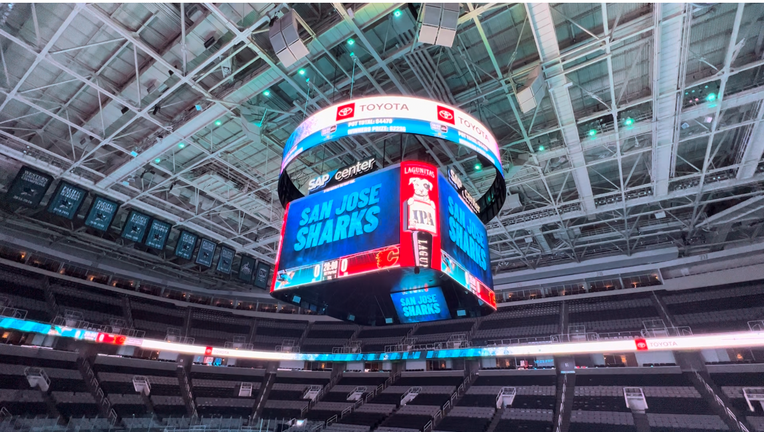 SAN JOSE, Calif. - This hockey season, the SAP Center's ice isn't the only action sport for Sharks fans. Suspended approximately 50 feet in the air, the latest technological marvel for arena sports is also an eye-catcher.

"When fans come to games, they come for the sporting part of it, hockey. But they also come to be entertained," said Jonathan Becher, president of the San Jose Sharks.

He said the newly installed "Center-On" display is state-of-the-art, and an upgrade over its predecessor. It measures 23 feet by 41 feet on each of its four sides, and the display has 6,000 square feet. of programmable video display.

Fans are able to follow players as they control the puck or come on or off the ice for line changes, all in 1080p HD.

The new "PartyCam" feature allows any smartphone to make the fan the center of attention.

"The fans are constantly looking for new things," said Becher. "The next generation of fans, the ones that are gonna take us to the next 50-to-100 years; they want not just the second screen, but a third screen. They want to be engaged all the time."

He said the next jaw-dropper comes during the Sharks game against the Philadelphia Flyers on Dec. 29. The display can show images in 3D, similar to New York’s Times Square video boards.

In a demonstration at the arena, what’s called "Force Perspective," displays a holiday greeting that appears to loop from front to back of the HD screen. Content and Entertainment Director Dustin Lamendola said it takes days of programming to bring this image to life.

"This is a combination of cinema 4D and after effects. Those are the programs that we use," he said. "When we’re working on something like this, our project manager…will definitely block off the motion graphics schedule for a good week of time and make sure we have someone who’s dedicated to that process."

"Our intent, for the rest of the season, and probably into next season as well, we’ll keep showing some new things," added Becher.

So, Sharks fans and those who are hockey novices, keep your head on a swivel as you keep an eye on the action, on and above the ice.