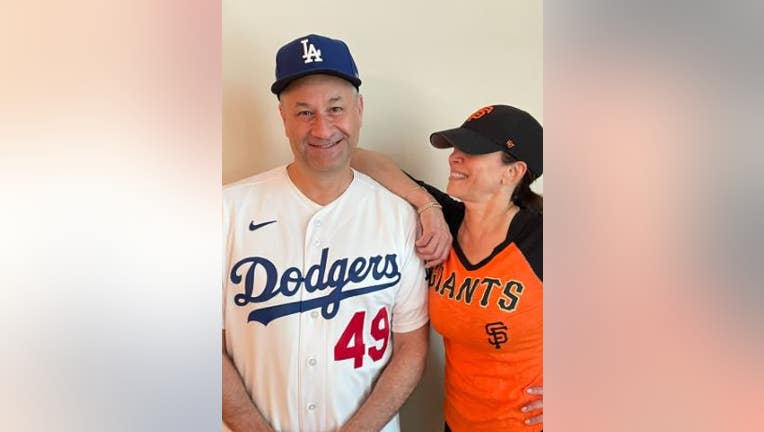 Vice President Kamala Harris and Second Gentleman Doug Emhoff are cheering for opposite teams in the National League Division Series with the Giants going up against the Dodgers.  (Twitter: @SecondGentleman)

SAN FRANCISCO - The San Francisco Giants and Los Angeles Dodgers rivalry runs deep. Its roots stretch as far back as the late 1880s in New York and evolved when both teams moved to the West Coast.

The Giants settled in the Bay Area and the Dodgers further south in Los Angeles. Aside from one of the fiercest rivalries in baseball history, the two regions have always duked it out over who's the best.

But with both teams situated on the same coast and in the same state, the rivalry between the friendly foes makes even the closest choose a side.

The Giants and Dodgers will go head-to-head in the National League Division Series and fans are showing their allegiance to their beloved teams, even if that divides up the household.

Vice President Kamala Harris and Second Gentleman Douglas Emhoff are ready for the two teams to face off, but Harris and her husband will be cheering for opposite teams.

Emhoff posted a photo to Twitter Friday of him alongside his wife. Harris is seen wearing a Giants jersey, while Emhoff is sporting Dodgers blue and white.

"The one thing we can’t agree on in our household. Good luck @Dodgers," Emhoff tweeted.

The Giants and Dodger will meet Friday evening for game one of the division series.

Fans of the Giants were ecstatic on Friday night as the home team beat up on the Los Angekes Dodgers in game 1 of the playoff series.