La Cree Jackson, a parent of a seventh-grader at the school, told FOX Television Stations that the assignment was really distasteful.

LOS ANGELES - A photo of a Mississippi middle school teacher’s writing assignment on slavery has gone viral and is drawing heavy criticism online, with many saying it trivializes and ignores the facts of slavery.

The assignment was given Wednesday to eighth-graders at Purvis Middle School, where students were asked to "pretend like you are a slave working on a Mississippi plantation" and "write a letter to your family back in Africa or in another American state describing your life." 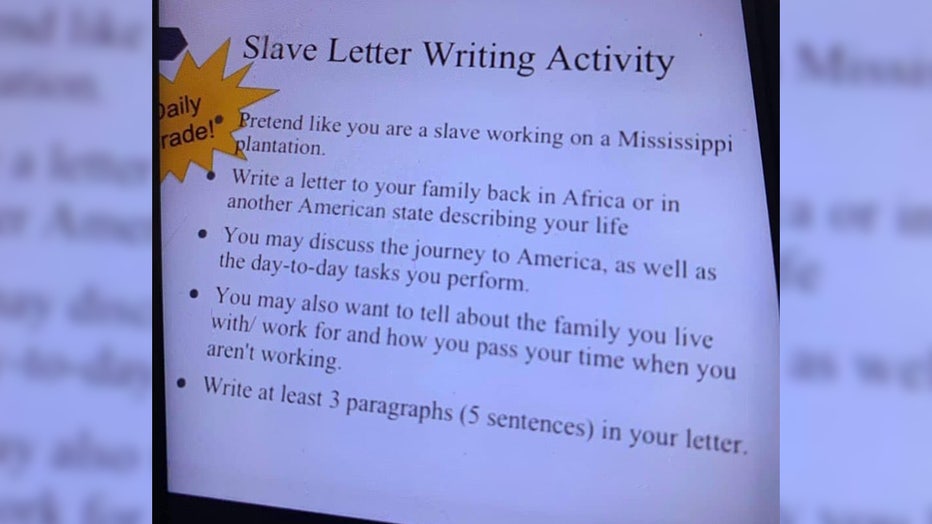 Frank Bunnell, the principal at the school, apologized to parents in a letter, noting that the assignment was the last page of a purchased PowerPoint presentation that discussed the details and conditions of the slave trade.

"Without the previous PowerPoint slides, the assignment portrays the evil practice of slavery with an extremely mild view," Bunnell wrote. "A person could read just the assignment and draw a very unrealistic view of the true tragedies that occurred. That was not intended. However, intent does not excuse anything."

Bunnell acknowledged that his words as a principal do not carry weight without action and that action will happen immediately.

"I apologize for something like this happening under my watch. Steps have already been taken to make sure it never happens again," Bunnell wrote.

But parents within the school district say racism and discrimination has been an "ongoing issue."

La’Cree Jackson, a parent of a seventh-grader at the school, told FOX Television Stations that the assignment was "really distasteful."

"I was disturbed, but at the same time, I wasn’t surprised," Jackson said of her first reaction in learning about the assignment. "There’s been racial issues going in Lamar County Schools since forever... for years."

Other parents within the district agree.

"Just last year we had White students chanting ‘White Power’ at Oak Grove High School while the district protected that student and significantly increased security in response to Black and Brown students wanting to speak out," Amy Nobles, a parent within the school district, told FOX Television Stations.

"I was shocked when I found them scanning and patting down mostly Black and Brown children (9 and 10 years old) for weapons like they were criminals and called it ‘standard procedure’. That's when we decided to homeschool," Nobles continued.

Jackson said her son was called racial slurs, including the N-word, by another student two weeks ago. She said she emailed the messages to the school, and the student was kicked off of the basketball team.

"The little boy’s kicked off the basketball team, but basketball season is over," La’Cree said.

An emergency board meeting was scheduled Thursday evening at Purvis Middle School Performing Arts Building to discuss the incident.

"They’re not doing anything at all," La’Cree said. "It’s more so swept under the rug."

Purvis Middle School did not immediately respond to our request for comment.