SAN FRANCISCO, Calif. - After receiving two traffic tickets in two Bay Area counties, Khaled Elsakkor hired help. He paid San Francisco based law firm flat fees for representation in court. But the attorney never showed up. And Elsakkor is just one of many drivers now facing even bigger fines and trouble.

"I was basically scammed," Elsakkor said. "He took the money and just kept the money. It’s just plain out scandalous."

Attorney Robert Amparan has disappeared from the courtroom in recent months. He’s the owner of California Traffic Defenders, which takes on cases of traffic-related offenses and advertises itself as "experienced and trustworthy" online and has offices in San Francisco and South San Francisco. 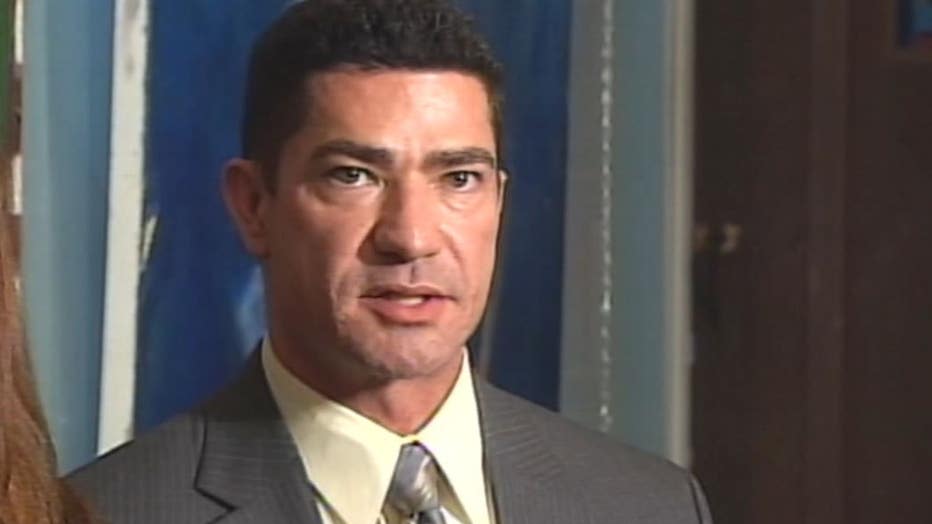 Defense attorney Robert Amparan speaks at a news conference in 2011 prior to his ownership of California Traffic Defenders. KTVU has been unable to find him in recent weeks.

Elsakkor admits he received two traffic tickets for failing to come to a complete stop at stop signs in San Francisco and San Mateo counties. He said he went to California Traffic Defenders and was charged $450 in hopes of getting the tickets dismissed.

Two months later, Elsakkor received two civil assessments close to $900 for failing to appear in court. Before that, he said he had no idea the attorney he hired never showed up in court on his behalf.

"It’s beyond belief," Elsakkor said. "Those are the people you go to for trust." 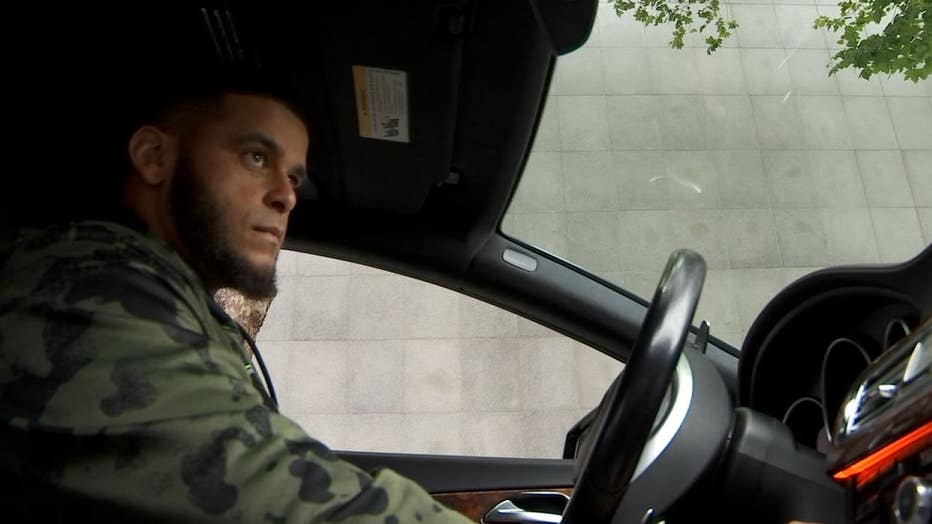 Khaled Elsakkor said he received two civil assessments close to $900 because the attorney he hired failed to appear in court.

Despite calls, emails and even visits to Amparan’s offices, Elsakkor said he has not heard from him or seen him since.

And he’s not the only one with the same story.

"I called at least 100 times," driver Tory Schwenk of Milpitas said. "I was completely reeling because my driver’s license is pretty indispensable to me."

Schwenk went to California Traffic Defenders for help with three different traffic tickets he got in Newark for failing to fully stop at a red light where there was a camera.

Again, Amparan did not show up for his court dates and Schwenk is facing additional fines. He too has been unable to reach Amparan and is out close to $1,000.

"It was obviously an incredibly negligent act of an attorney not to show up to court," Schwenk said.

He and several other victims tell KTVU they’ve filed complaints with The State Bar of California in hopes Amparan will be held accountable.

Despite KTVU’s repeated calls, emails and visits to Amparan’s home and offices, he has never responded to requests for comment. 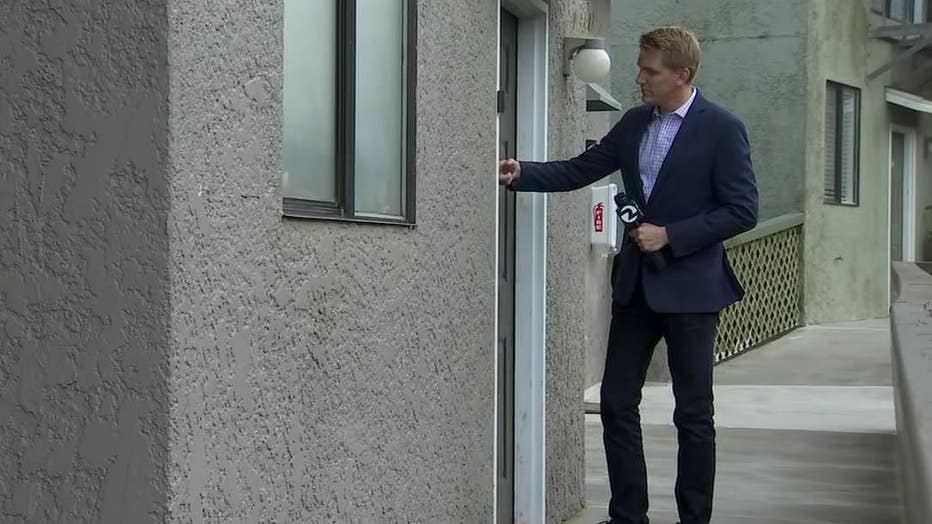 Investigative Reporter Brooks Jarosz spent weeks trying to track down attorney Robert Amparan, including at his home, but he was never found or heard from.

A note on his South San Francisco office shows he owes more than $12,000 in rent and the landlord confirms he is taking legal action against Amparan.

Amparan’s San Francisco office, which ironically is across the street from the Hall of Justice, appeared abandoned.

Still, his California lawyer’s license is still active with no current discipline against him. 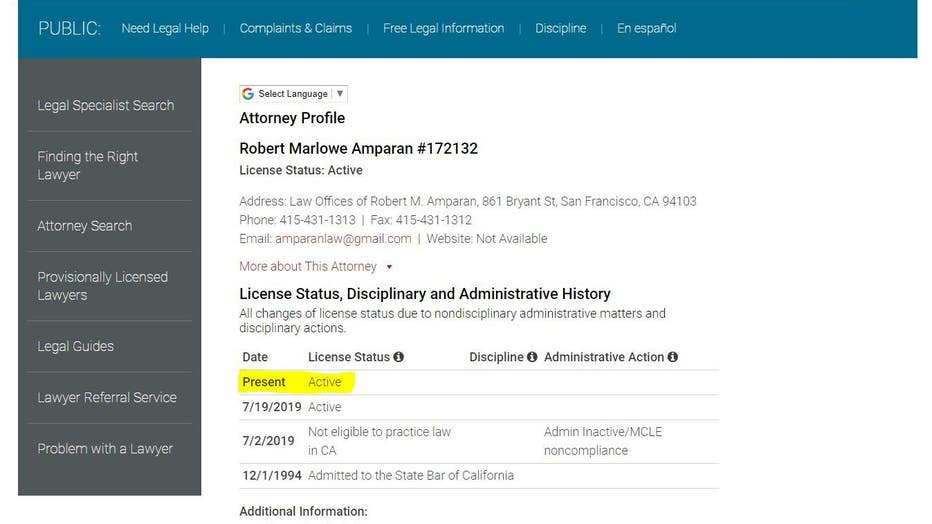 Attorney Robert Amparan currently has an active lawyer's license with The State Bar of California.

Zitrin said The State Bar of California should step in and investigate, but it has a history of failing to do it quickly – if at all.

"The Office of Trial Counsel that is in charge of prosecuting lawyers does a very poor job of being able to do it efficiently and really going after the big, bad guys – the folks who are hurting little people," he said.

State audits, including a recent one from April, show The State Bar does not effectively investigate and discipline delinquent attorneys.

Most of the people KTVU identified as victims said they filed complaints with The State Bar, however, those complaints are not public. The State Bar would not comment on whether or not an investigation has been opened on Amparan.

Zitrin said it’s more efficient to sue a lawyer in small claims court for money rather than hoping the state will disbar or discipline an attorney.

"The State Bar doesn’t have a good way of sorting out the big, important, do them right away things with the ones that can wait until later on for adjudication." Zitrin said.

Since this story was first published, other drivers claim they have been victimized by Amparan and his business.

Adam Cohen, traffic attorney and owner of Ticket Crushers said he has taken some of Amparan's former clients getting the cases resolved or back before a judge.

"Don't wait until it's too late," he said. "If you're in this situation, Call an attorney and get it fixed immediately."

KTVU investigative reporter Brooks Jarosz with a follow-up on an investigation into a traffic lawyer accused of scamming clients.

He offered these tips to assist those who find themselves in this predicament.

"Get it handled it court," Cohen said. "Don't try to do it yourself."