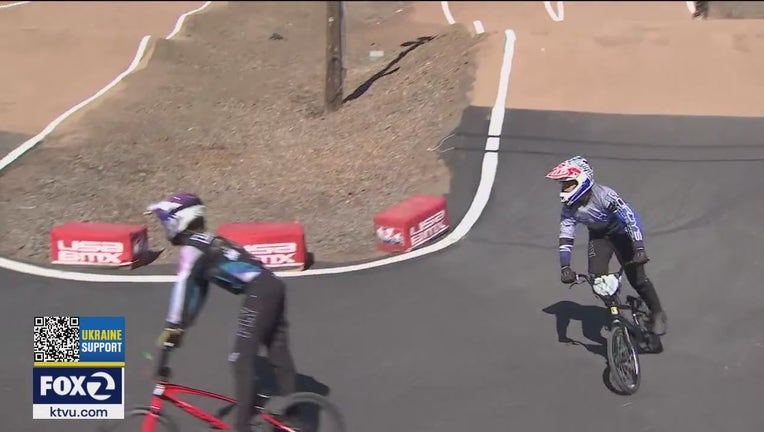 SAN JOSE, Calif. - It’s been at least two years since the Bay Area has seen an action-packed sports weekend such as the one that’s on-tap for this weekend.

From sea racing on San Francisco Bay, to soccer in the South Bay, and from the NCAA hardwood tournament hoops in the city, to the bumps of BMX racing; the weekend will offer something for everyone.

"The draw might be BMX, but what it brings to the community as far as economic impact. Bringing people together. It’s getting people out of the house," said Nick Valencia, track operator at the Santa Clara BMX track.

Several thousand BMX racers are ready catching air, and the hope, a top spot as they vie for a place on the U.S. national team which will compete in the world championships.

This event is one of four major happenings around the Bay over the weekend.

"Enjoying ourselves is why we build an economy in the first place," said Dr. Robert Chapman Wood, a strategic management professor at San Jose State University.

In San Francisco, the GP Sail Championship hits the water this weekend as well.

"So far, it looks like they’re having a lot of fun out there. I’ve been impressed with some of the speeds and the maneuvers they’re pulling out," said spectator Terry Armdinger, as he watched practice runs from the shore near Saint Francis Yacht Club.

On Chase Center’s hardwood, the NCAA Regional Tournament continues for two more contests. Fresh off a major upset earlier in the week, the University of Arkansas men’s team, and other would-be champions, look to advance – to the delight of fans.

"March Madness is my time of year. I really enjoy it. And it being in San Francisco, is really special," said a San Francisco resident who follows the March tournament. Added another, "Let’s get the excitement going. Heard about FanFest. Wanted to experience it. Nice city."

City officials said the draw of the competition pales in comparison to the subliminal magnet the city and region poses.

"By no means will these events be the only reason they’re here. They will return after having a good experience," said Rory Davis of SF Travel Association.

Experts point to the economic multiplier effect for every dollar spent, that will become an elixir to aid the region’s COVID recovery.

For competitors at the BMX track in Santa Clara, economics isn’t the driver, but the desire to compete and have fun, at any age.

"I don’t think spots have to compete. But rather, there’s a place for everyone," said 50-year-old racer Damon Smith.

Also, this weekend, an international soccer game at PayPal Stadium between Chivas and Club Leon. Kickoff is 5:30 p.m. Saturday, but it’s preceded by a FanFest, which starts at 1:30 p.m.