The FBI has released its final report on the murder investigation of Gabby Petito, finding Brian Laundrie at fault for the death. The FBI report lays out a timeline of the investigation, saying a review of Laundrie's notebook "revealed written statements by Mr. Laundrie claiming responsibility for Ms. Petito’s death."

SARASOTA, Fla. - Brian Laundrie’s full autopsy and forensic reports were released on Monday, revealing new information about the circumstances around his death and the Gabby Petito case — including details about items found near his remains.

The 47-page report described a "main" scene that contained personal items belonging to Laundrie, including a "pair of green shorts with a green belt, two slip-on shoes, a backpack with unknown contents, a white metal ring," as well as a handgun.

The "secondary" scene contained skeletal animal remains, a "half handwritten note" and a hat with the logo "MOAB Coffee Roasters," according to the report.

Laundrie had been the subject of a manhunt for more than a month last year as investigators searched for clues in the killing of Petito, his 22-year-old fiancé. His remains were later discovered within the vast Carlton Reserve wilderness park in Sarasota County, Florida.

The District Twelve Medical Examiner's Office had previously confirmed that Laundrie died from a self-inflicted gunshot wound to the head. The FBI also said earlier that a review of the notebook found near Laundrie's remains showed he claimed responsibility for Petito's death.

In the new report, Deputy Chief Medical Examiner Wilson Broussard Jr. wrote that injury to Laundrie’s skull and the presence of a handgun was "consistent with a gunshot wound to the head."

The new documents revealed that Laundrie’s body was likely submerged in up to 3 feet of floodwater "for an extended period of time," which likely contributed to the lengthy search for him. It also indicated that investigators found evidence of carnivore and rodent scavenging at the scene.

The report additionally confirmed that a dry bag was found "approximately 250 feet southwest of the main area" that contained a journal along with a wooden box, holding a smaller notebook and photos — including at least one of Laundrie.

The discovery of Laundrie’s remains in October ended the massive search involving federal, state and local law enforcement that began shortly after Laundrie disappeared Sept. 14, two weeks after the 23-year-old returned alone to his parents’ home in North Port, Florida. 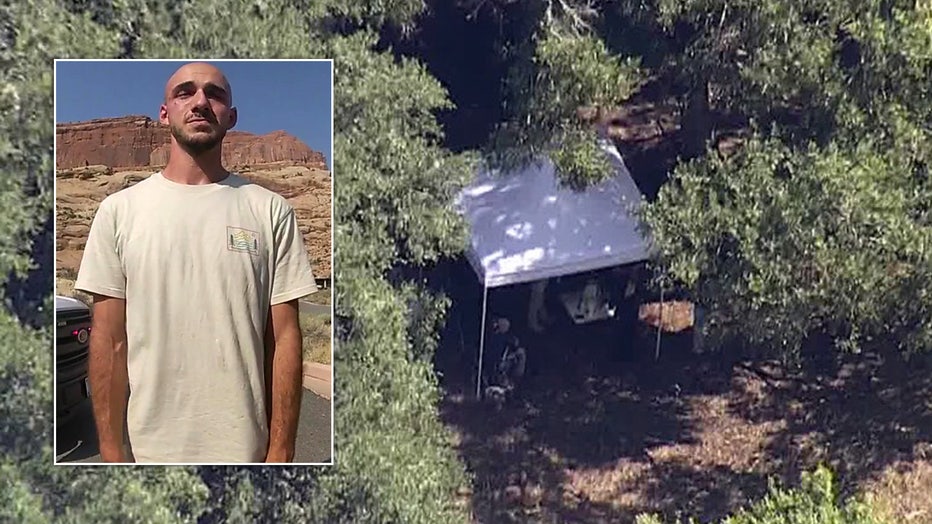 Petito’s family reported the 22-year-old woman missing Sept. 11, launching a search that garnered worldwide media attention and, in Laundrie’s case, focused largely on the Carlton Reserve wilderness park near the Laundrie home. It is a densely wooded, swampy area that’s home to alligators, coyotes, bobcats, snakes and numerous other creatures.

Petito’s remains were discovered Sept. 19 on the edge of Grand Teton National Park in Wyoming, one of the places the young couple had visited on the trip they documented through social media videos. Authorities said the body had been there for about a month.

An autopsy in Wyoming concluded Petito died by strangulation and that it was a homicide. Laundrie was listed as a "person of interest" in her killing, but he was charged only with fraudulent use of a debit card that was not his.

RELATED: Gabby Petito update: Everything known about her death, search for Brian Laundrie

The FBI did not specify what, exactly, Laundrie had written in the texts he’d sent to mislead. The texts were sent between Laundrie’s phone and Petito’s phone, according to the statement.

The couple documented their trip on Instagram. They crossed Colorado and on Aug. 12 were stopped by police near Moab, Utah, after the two got into a scuffle.

Police video showed Petito describing a fight that escalated. Police concluded Petito was the aggressor, but officers decided to separate them for the night rather than file charges.

The Moab City Police Department in eastern Utah have released bodycam footage of 22-year-old Gabrielle "Gabby" Petito and her boyfriend, Brian Laundrie, being pulled over on Thursday, August 12.

An independent report faulted Utah police for not issuing a domestic violence citation to Petito after she told police she had hit Laundrie first. The report also pointed to indications Petito was likely a victim in their overall relationship and faulted investigators for not taking a statement from a 911 caller who reported seeing the couple outside their van and a man slapping a girl.

The ultimately tragic search for Petito drew worldwide attention, sparking social media sleuthing, discussions about dating violence and shining a light on the disproportionate coverage of missing white women in the U.S. compared to other missing persons.

The Associated Press contributed to this report. This story was reported from Cincinnati and Los Angeles.