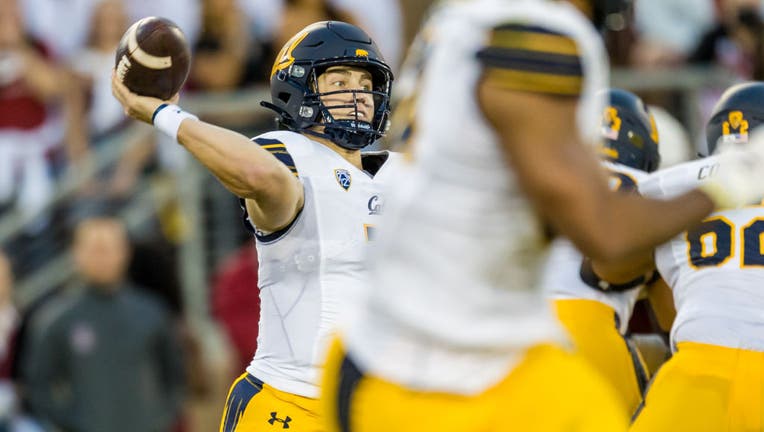 Chase Garbers returned from a bout with COVID-19 to throw the longest pass in the history of the rivalry against Stanford, leading California to a 41-11 victory on Saturday.

"It was a lot of fun to watch," coach Justin Wilcox said. "You could tell they had that don’t-be-denied attitude throughout the entire game."

Garbers was one of more than 20 players from Cal (4-6, 3-4 Pac-12) to miss the game at Arizona two weeks ago following a positive test. The Golden Bears had more than 40 positive tests in all for the program, leading to last week’s game against Southern California to be postponed.

But nearly all of those players were back on Saturday and Cal delivered a thorough beating of Stanford (3-8, 2-7) with a Big Game record 636 yards of offense, including 352 on the ground.

"We knew on Monday after that practice that we were going to do something special today," Garbers said. "We knew we would pick up where we left off."

Garbers delivered the biggest play with an 84-yard TD pass to Trevon Young to open the scoring in the second quarter. That broke the record for longest pass in the series, eclipsing the 82-yarder Brian Johnson threw to Walter Batson for Stanford in 1987.

Garbers added a 1-yard TD pass to Christopher Brooks later in the half to deliver Cal just its second win in the past 11 Big Games. Garbers ran and threw for a score two years ago in a 24-20 win at Stanford Stadium that was the Bears’ only other win in the past 11 games against Stanford.

"I’m really glad Chase is on our team while I’ve been here to quarterback the Big Game," Wilcox said. "He had another good one today. Chase is playing his best ball since being here. It’s not even close."

The Cardinal have dropped six straight games overall for their longest skid since losing their first nine games in 2006 under coach Walt Harris.

Even the return of Tanner McKee made little difference for Stanford. He missed the past two games when the Cardinal were outscored by 66 points in losses to Utah and Oregon State and struggled to get much going on offense after failing on two early fourth downs near the goal line.

"Not good enough by any stretch of the imagination," coach David Shaw said. "We had a couple of opportunities and didn’t take advantage. That’s kind of been one of the issues for the entire year. We put ourselves in position and we don’t finish. I put that on myself."

Stanford was gashed again by big plays, allowing a 75-yard run to Brooks and a 76-yard TD run to Marcel Dancy in the third quarter. The Cardinal have allowed five TDs from scrimmage of more than 50 yards in the past three games.

"Any time you leave any good back or any back with arm tackles, it’s not gong to cut it in the Pac-12," safety Jonathan McGill said. "Tackling has been an issue for our defense."

California: The Bears remain in position to salvage something positive out of a disappointing season. They finish up with a trip to UCLA followed by the makeup of the USC game at home. If they complete the sweep of their California rivals they will be bowl eligible for the third time in the past four seasons under Wilcox, missing out only in the pandemic shortened 2020 season.

Stanford: The eight losses this season match the most for the Cardinal since they went 1-11 in 2006. Jim Harbaugh arrived the next year and built Stanford into a power that David Shaw continued. But Shaw hasn’t had much success of late, going 4-8 in 2019 and now losing at least eight games again this year. The Cardinal have been outscored 93-18 the past two home games.

The game got off to an unusual start with neither team punting or scoring on the first five drives. McKee threw an interception on the second play from scrimmage only to have Damien Moore fumble it right back on the next play.

McKee was then stopped on a fourth-and-goal sneak from just inside the 3 before Garbers gave it back on an interception.

Cal came into the week tied for the fewest turnovers in the nation with six and hadn’t committed any in the previous four games.

Stanford was stopped on another fourth down from the 5 on the fifth drive of the game before Garbers and Clark connected on the long score.