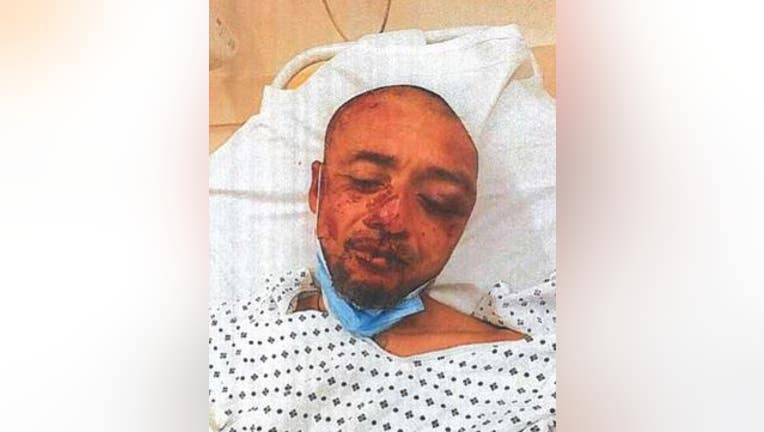 Sergio Lugo in the hospital after SFPD officers beat him on February 17, 2021. Mr. Lugo suffered a fractured cheekbone and several bruises and lacerations to his head and face.

SAN FRANCISCO - San Francisco prosecutors on Tuesday dismissed all charges against a man who was accused of assaulting a plain clothed police officer while being detained.

The San Francisco Public Defender's Office said in the early morning hours on Feb. 17 2021 Sergio Lugo was walking around the Castro District when two plainclothes officers detained and questioned him.

Lawyers said officers told Lugo they were going to search him, but the defendant declined and told officers he was going to walk away.

"Without any verbal warning, the two officers grabbed his arm, kicked his legs out from under him, and pinned him on the ground. A third officer joined, who later admitted to hitting Mr. Lugo 15-25 times," the public defender's office said.

The defense maintains Lugo was illegally detained as he hadn't committed any crime. 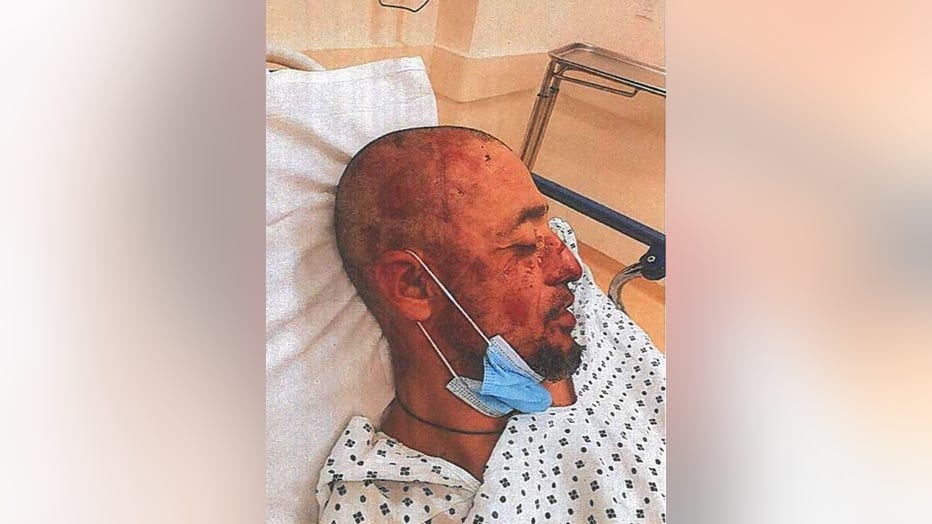 Sergio Lugo in the hospital after SFPD officers beat him on February 17, 2021. Mr. Lugo suffered a fractured cheekbone and several bruises and lacerations to his head and face.

When the officers first encountered Lugo, he was holding a silver object in his hand, which police thought was a vape pen. The object turned out to be an X-Acto Knife – a small pen-shaped tool with a sharp edge commonly used for crafts to cut materials.

The defense and prosecution agreed that when Lugo was pinned to the ground, the cap on the X-Acto Knife fell off.

"The sharp edge caused superficial cuts to one officer’s pinkie and knee, but the officers’ blows to Mr. Lugo’s head sent him to the hospital with bruises, lacerations, and a fractured cheekbone," defense lawyers said.

Several neighbors testified that they heard more than they could see, but what they observed compelled two of them to call the police.

"Their statements were consistent in that the three men on top were beating the man on the ground who was screaming in pain," the public defender's office said.

Lugo was subsequently charged with assault on an officer, exhibiting a deadly weapon to resist arrest, and three counts of resisting arrest using force. He spent over four months in jail.

Before the case was getting ready to go to trial, the defense team argued that Lugo had committed no crime and the prosecutor ultimately agreed to dismiss the case.

Deputy Public Defender Alexandra Pray said after the dismissal, "The police had no right to detain, search, initiate force, and escalate force against Mr. Lugo who committed no crime. Police created this situation, and given the evidence, the prosecution finally did the right thing and dismissed these charges."

A complaint was filed with the Department of Police Accountability on behalf of Lugo. The involved San Francisco police officers were Sgt. Alexander Lentz, Lt. Kevin Healy, and Officer Glennon Griffin.