Even though Contra Costa County is soon to receive $59 million in federal funds, it decided that issues surrounding mass deportations from the county are not ready for a rescue plan. Tom Vacar reports

Martinez, California - Even though Contra Costa County is soon to receive $59 million in federal funds, it decided that issues surrounding mass deportations from the county are not ready for a rescue plan.

A variety of public and private advocacy groups rallied their supporters in front of the Contra Costa County Board of Supervisors Tuesday morning.

They demanded fairness for potential deportees in the form of legal representation.

"Immigrants and refugees risk their lives leaving their countries to come here for a better life," said one activist. "It's time for real immigration reform, and it's time for the public defenders to finally get this funding," added another.

Despite universal support from those making public comments, there was real fear the supervisors would not fund it.

"Constitutional protections of due process and equal protection embodied in our Constitution and Bill of Rights applies to every person regardless of immigration status," said ACLU lawyer Raquel Ortega.

After hours of discussion, the board of supervisors voted to deny the public defender's office's request for $1.8 million in extra funding. That money would have been used to fund three lawyers and support staff to more effectively fight mass deportations from the county. 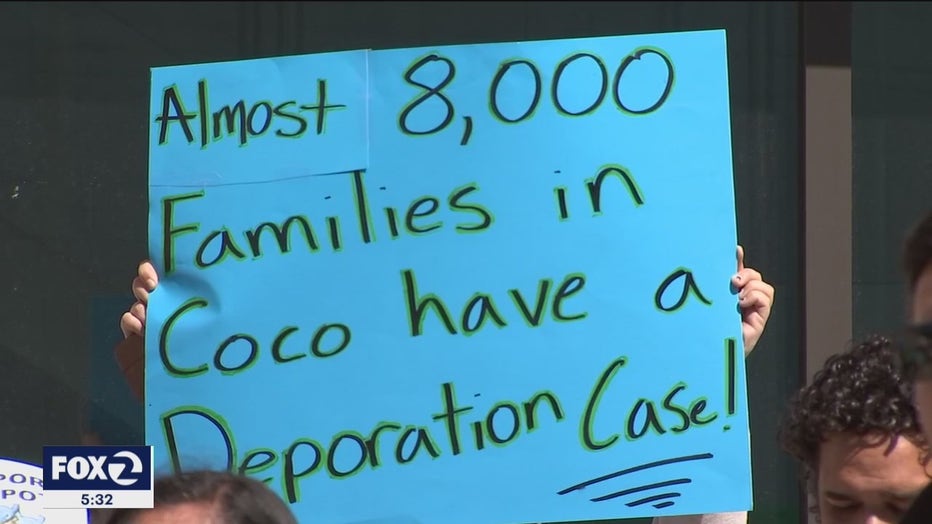 "I've become a believer that budgets really represent the values of the county and the only message that this county is showing is that they are anti-immigrant," said Tony, a member of the Contra Costa Immigrants Alliance.

Next year, Uncle Sam wants to open a new immigration court in this Concord office complex to hear some 7,800 pending cases. A third of those people do not have legal representation.

Studies show that immigrants who have lawyers, free or paid for, win the right to stay as much as 70% of the time. But, immigrants without lawyers win only 20% of their cases.

"Families would go defenseless to their court case against a judge and increase deportations. You would be letting them go defenseless," said another activist.

The supervisors say they will revisit the question later.

In the meantime, the list of potential deportees grows in the county and the wait list for the one public defender who handles such cases grows at a rapid pace.