WASHINGTON (AP) - At least 50,000 Afghans are expected to be admitted into the United States following the fall of Kabul as part of an "enduring commitment" to help people who aided the American war effort and others who are particularly vulnerable under Taliban rule, the secretary of homeland security said Friday.

Tens of thousands of Afghans have already made it through security vetting and arrived in the U.S. to begin the process of resettlement. Exactly how many more will come and how long it will take remain open questions, DHS Secretary Alejandro Mayorkas said as he outlined the effort.

"Our commitment is an enduring one," he told reporters. "This is not just a matter of the next several weeks. We will not rest until we have accomplished the ultimate goal."

Mayorkas and other Biden administration officials are providing the most detailed look to date at what began as a frantic and chaotic effort to evacuate U.S. citizens, permanent residents and Afghans before the Aug. 30 withdrawal of American troops and the end of the country's longest war.

Jack Markell, former governor of Delaware, will serve as coordinator of what the White House is calling "Operation Allies Welcome." He will work alongside the National Security Council, Domestic Policy Council, DHS, and other federal agencies "to ensure vulnerable Afghans who pass screening and vetting reviews are safely and efficiently resettled here in the United States," said Karine Jean-Pierre, the White House principal deputy press secretary. The appointment is expected to run through the end of the year.

Nearly 130,000 were airlifted out of Afghanistan in one of the largest mass evacuations in U.S. history. Many of those people are still in transit, undergoing security vetting and screening in other countries, including Germany, Spain, Kuwait and Qatar.

Mayorkas said there have been some evacuees who have been stopped at transit countries because of "derogatory information," though he provided no details. It is unclear what happens to any Afghans who don't make it through the security screening at the overseas transit points, though the secretary said the U.S. is working with its allies to address the issue.

More than 40,000 have arrived in the U.S. so far. Mayorkas said about 20% are either U.S. citizens or permanent residents. The rest are people who have received or are in the process of receiving what's known as a Special Immigrant Visa — for those who worked for the American military or NATO as interpreters or in some other capacity — and Afghans considered particularly vulnerable under Taliban rule, such as journalists and employees of nongovernmental organizations.

"We have a moral imperative to protect them, to support those who have supported this nation," said Mayorkas, who as a child came to the U.S. as a refugee from Cuba with his family. 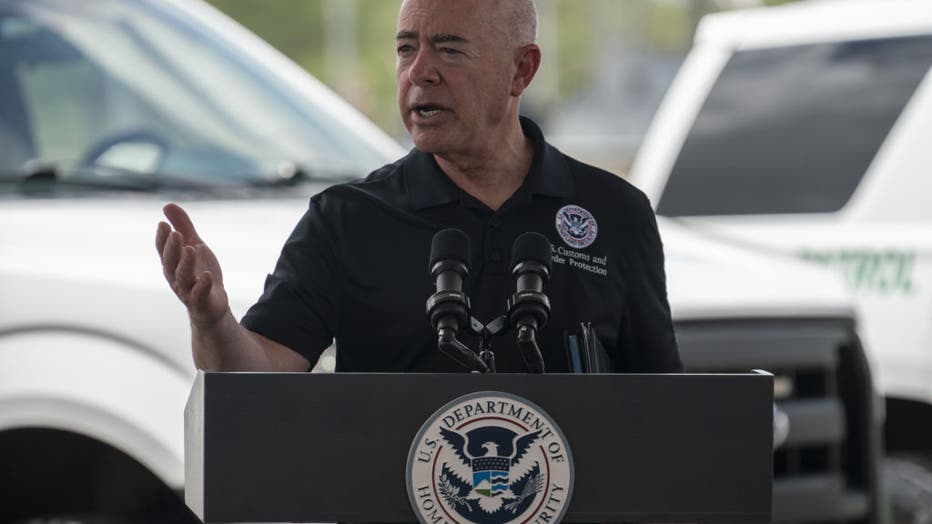 While he said the U.S. expected to admit at least 50,000 Afghans, he suggested there was no set limit or a specific time frame.

"Our mission is not accomplished until we have safely evacuated all U.S. citizens who wish to leave Afghanistan or lawful permanent residents, all individuals who have assisted the United States in Afghanistan," he said. "This effort will not end until we achieve that goal."

Though the U.S. airlift has ended, Taliban officials have said they would allow people with valid travel papers to leave, and they may feel compelled not to backtrack as they seek to continue receiving foreign aid and run the government.

Most of the Afghans who have arrived in the U.S. are being housed on military bases around the country, receiving medical treatment, assistance with submitting immigration applications and other services aimed at helping them settle in the country.

There were more than 25,000 Afghan evacuees at eight bases with capacity for twice as many, said Air Force Gen. Glen VanHerck, who heads U.S. Northern Command.

So far, few have tested positive tested positive for COVID-19 and there have been no security problems, but VanHerck said the military has designated an officer to act as a "mayor" of the emerging communities.

"I’m building eight small cities, we’re going to have challenges," he told reporters at the Pentagon.