The man accused of slaying a woman with a sword in San Carlos has a history of mental illness, and is undergoing a mental exam before criminal proceedings move forward.

REDWOOD CITY, Calif. - The man accused of slaying a woman with a sword in San Carlos has a history of mental illness, and is undergoing a mental exam before criminal proceedings move forward.

Jose Solano Landaeta, who goes by "Rafi Solano" was assigned two doctors by a judge Tuesday to perform a mental evaluation and determine if Solano is competent to stand trial.

Prosecutors say Solano killed Karina Castro last Thursday by repeated blows to the neck with a large sword. It happened on a neighborhood street in San Carlos just feet from Castro’s apartment.

Solano was charged with her murder and remained silent in court Tuesday, with his head down. He was chained, shackled and wrapped in a smock to prevent him from hurting himself.

"I just think this is a big act," said Monica Camacho, a Castro family friend. "I feel he’s a coward for standing there and having no remorse for anything." 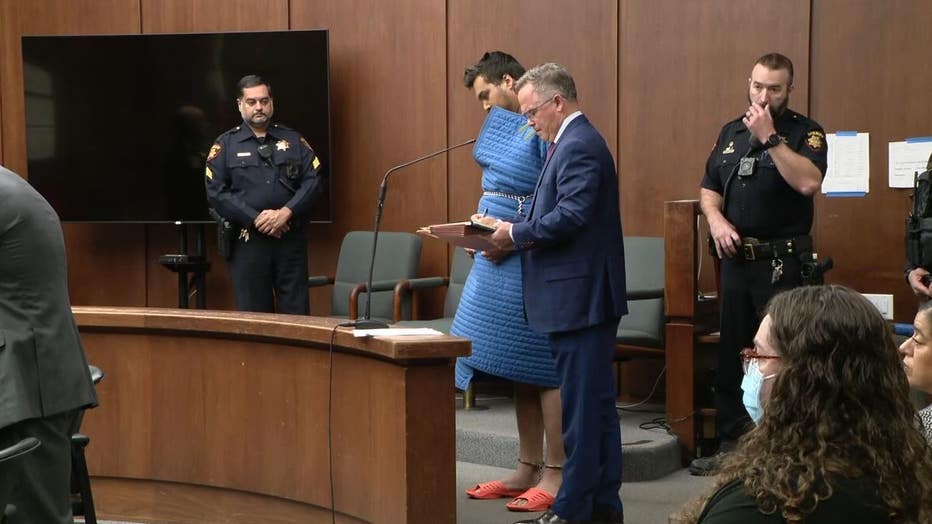 Solano’s attorney tells KTVU that despite trying to communicate with him, he has been unable to get through to him, despite repeat visits to the San Mateo County jail.

"He seems dead set and ruminating at this point in time," Attorney Robert Cummings said. "It is sadly a soul that is riddled with schizophrenia and I’m hoping that these doctors can come back with an evaluation that will lead us to get him to where he needs to be in the system."

Doctors were given eight weeks to complete Solano’s mental exam and make a determination that will be presented in court on November 14.

But for those who knew Castro, they say there was also a history of domestic violence at the hands of Solano.

Castro leaves behind two daughters, including Solano’s infant child. A protection order was filed against Solano that family and friends say was often ignored and violated.

They now fear if Solano is determined to be unable to stand trial he’ll never be held accountable for the alleged crime.