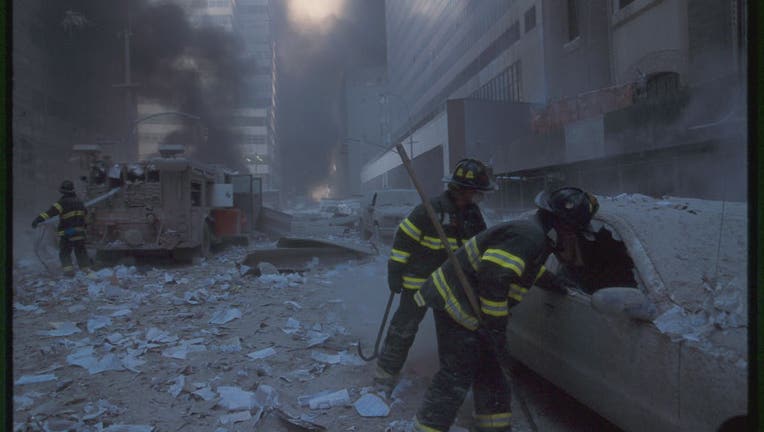 Firefighters look into a vehicle damaged during the 9/11 terror attacks on the Twin Towers. Photograph is from 8 rolls of unedited film taken by an anonymous photojournalist at ground zero that day. (Library of Congress, Prints &amp; Photographs)

In the ghastly rubble of ground zero's fallen towers 20 years ago, Hour Zero arrived, a chance to start anew.

In Iran, chants of "death to America" quickly gave way to candlelight vigils to mourn the American dead. Vladimir Putin weighed in with substantive help as the U.S. prepared to go to war in Russia's region of influence.

Libya's Moammar Gadhafi, a murderous dictator with a poetic streak, spoke of the "human duty" to be with Americans after "these horrifying and awesome events, which are bound to awaken human conscience."

From the first terrible moments, America's longstanding allies were joined by longtime enemies in that singularly galvanizing instant. No nation with global standing was cheering the stateless terrorists vowing to conquer capitalism and democracy. How rare is that?

Too rare to last, it turned out.
------
Civilizations have their allegories for rebirth in times of devastation. A global favorite is that of the phoenix, a magical and magnificent bird, rising from ashes. In the hellscape of Germany at the end of World War II, it was the concept of Hour Zero, or Stunde Null, that offered the opportunity to start anew.

For the U.S., the zero hour of Sept. 11, 2001, meant a chance to reshape its place in the post-Cold War world from a high perch of influence and goodwill as it entered the new millennium. This was only a decade after the collapse of the Soviet Union left America with both the moral authority and the financial and military muscle to be unquestionably the lone superpower.

Those advantages were soon squandered. Instead of a new order, 9/11 fueled 20 years of war abroad. In the U.S., it gave rise to the angry, aggrieved, self-proclaimed patriot, and heightened surveillance and suspicion in the name of common defense.

It opened an era of deference to the armed forces as lawmakers pulled back on oversight and let presidents give primacy to the military over law enforcement in the fight against terrorism. And it sparked anti-immigrant sentiment, primarily directed at Muslim countries, that lingers today.

A war of necessity -- in the eyes of most of the world -- in Afghanistan was followed two years later by a war of choice as the U.S. invaded Iraq on false claims that Saddam Hussein was hiding weapons of mass destruction. President George W. Bush labeled Iran, Iraq and North Korea an "axis of evil."

Thus opened the deep, deadly mineshaft of "forever wars." There were convulsions throughout the Middle East, and U.S. foreign policy -- for half a century a force for ballast -- instead gave way to a head-snapping change in approaches in foreign policy from Bush to Obama to Trump. With that came waning trust in America's leadership and reliability.

Other parts of the world were not immune. Far-right populist movements coursed through Europe. Britain voted to break away from the European Union. And China steadily ascended in the global pecking order.

President Joe Biden is trying to restore trust in the belief of a steady hand from the U.S. but there is no easy path. He is ending war, but what comes next?

In Afghanistan in August, the Taliban seized control with menacing swiftness as the Afghan government and security forces that the United States and its allies had spent two decades trying to build collapsed. No steady hand was evident from the U.S. in the harried, disorganized evacuation of Afghans desperately trying to flee the country in the first weeks of the Taliban's re-established rule.

Allies whose troops had fought and died in the U.S-led war in Afghanistan expressed dismay at Biden's management of the U.S. withdrawal, under a deal President Donald Trump had struck with the Taliban.

In the United States, the Sept. 11 attacks set loose a torrent of rage.

In shock from the assault, a swath of American society embraced the us vs. them binary outlook articulated by Bush -- "Either you are with us, or you are with the terrorists" -- and has never let go of it.

You could hear it in the country songs and talk radio, and during presidential campaigns, offering the balm of a bloodlust cry for revenge. "We'll put a boot in your ass, it's the American way," Toby Keith promised America's enemies in one of the most popular of those songs in 2002.

Americans stuck flags in yards and on the back of trucks. Factionalism hardened inside America, in school board fights, on Facebook posts, and in national politics, so that opposing views were treated as propaganda from mortal enemies. The concept of enemy also evolved, from not simply the terrorist but also to the immigrant, or the conflation of the terrorist as immigrant trying to cross the border.

The patriot under threat became a personal and political identity in the United States. Fifteen years later, Trump harnessed it to help him win the presidency.

In the week after the attacks, Bush demanded of Americans that they know "Islam is peace" and that the attacks were a perversion of that religion. He told the country that American Muslims are us, not them, even as mosques came under surveillance and Arabs coming to the U.S. to take their kids to Disneyland or go to school risked being detained for questioning.

For Trump, in contrast, everything was always about them, the outsiders.

In the birther lie Trump promoted before his presidency, Barack Obama was an outsider. In Trump's campaigns and administration, Muslims and immigrants were outsiders. The "China virus" was a foreign interloper, too.

Overseas, deadly attacks by Islamic extremists, like the 2004 bombing of Madrid trains that killed nearly 200 people and the 2005 attack on London's transportation system that killed more than 50, hardened attitudes in Europe as well.

By 2015, as the Islamic State group captured wide areas of Iraq and pushed deep into Syria, the number of refugees increased dramatically, with more than 1 million migrants, primarily from Syria, Afghanistan and Iraq, entering Europe that year alone.

The year was bracketed by attacks in France on the Charlie Hebdo magazine staff in January after it published cartoons of the Prophet Muhammad, and on the Bataclan theater and other Paris locations in November, reinforcing the angst then gripping the continent.

Already growing in support, far-right parties were able to capitalize on the fears to establish themselves as part of the European mainstream. They remain represented in many European parliaments, even as the flow of immigrants has slowed dramatically and most concerns have proved unfounded.

Dozens of countries joined or endorsed the NATO coalition fighting in Afghanistan. Russia acquiesced to NATO troops in Central Asia for the first time and provided logistical support. Never before had NATO invoked Article 5 of its charter that an attack against one member was an attack against all.

But in 2003, the U.S. and Britain were practically alone in prosecuting the Iraq war. This time, millions worldwide marched in protest in the run-up to the invasion. World opinion of the United States turned sharply negative.

In June 2003, after the invasion had swiftly ousted Saddam and dismantled the Iraqi army and security forces, a Pew Research poll found a widening rift  between Americans and Western Europeans and reported that "the bottom has fallen out of support for America in most of the Muslim world." Most South Koreans, half of Brazilians and plenty more people outside the Islamic world agreed.

And this was when the war was going well, before the world saw cruel images from Abu Ghraib prison, learned all that it knows now about CIA black op sites, waterboarding, years of Guantanamo Bay detention without charges or trials -- and before the rise of the brutal Islamic State.

By 2007, when the U.S. set up the Africa Command to counter terrorism and the rising influence of China and Russia on the continent, African countries did not want to host it. It operates from Stuttgart, Germany.

Over the two decades, a succession of U.S. presidents scored important achievements in shoring up security, and so far U.S. territory has remained safe from more international terrorism anywhere on the scale of 9/11.

Globally, U.S.-led forces weakened al-Qaida, which has failed to launch a major attack on the West since 2005. The Iraq invasion rid that country and region of a murderous dictator in Saddam.

Yet strategically, eliminating him did just what Arab leaders warned Bush it would do: It strengthened Saddam's main rival, Iran, threatening U.S. objectives and partners.

Deadly chaos soon followed in Iraq. The Bush administration, in its nation-building haste, failed to plan for keeping order, leaving Islamist extremists and rival militias to fight for dominance in the security vacuum.

The overthrow of Saddam served both to inspire and limit public support for Arab Spring uprisings a few years later. For if the U.S. showed people in the Middle East that strongmen can be toppled, the insurgency demonstrated that what comes next may not be a season of renewal.

Authoritarian regimes in the Middle East pointed to the post-Saddam era as an argument for their own survival.

The U.S.-led wars in Afghanistan and Iraq killed more than 7,000 American military men and women,  more than 1,000 from the allied forces, many tens of thousands of members of Afghan and Iraqi security forces, and many hundreds of thousands of civilians, according to Brown University's Costs of War project. Costs, including tending the wars' unusually high number of disabled vets, are expected to top $6 trillion.

For the U.S., the presidencies since Bush's wars have been marked by an effort -- not always consistent, not always successful -- to pull back the military from the conflicts of the Middle East and Central Asia.

The perception of a U.S. retreat has allowed Russia and China to gain influence in the regions, and left U.S. allies struggling to understand Washington's place in the world. The notion that 9/11 would create an enduring unity of interest to combat terrorism collided with rising nationalism and a U.S. president, Trump, who spoke disdainfully of the NATO allies that in 2001 had rallied to America's cause.

Even before Trump, Obama surprised allies and enemies alike when he stepped back abruptly from the U.S. role of world cop. Obama geared up for, then called off, a strike on Syrian President Bashar Assad for using chemical weapons against his people.

"Terrible things happen across the globe, and it is beyond our means to right every wrong," Obama said on Sept. 11, 2013.

The legacies of 9/11 ripple both in obvious and unusual ways.

Most directly, millions of people in the U.S. and Europe go about their public business under the constant gaze of security cameras while other surveillance tools scoop up private communications. The government layered post-9/11 bureaucracies on to law enforcement to support the expansive security apparatus.

Militarization is more evident now, from large cities to small towns that now own military vehicles and weapons that seem well out of proportion to any terrorist threat. Government offices have become fortifications and airports a security maze.

But as profound an event as 9/11 was, its immediate effect on how the world has been ordered was temporary and largely undone by domestic political forces, a global economic downturn and now a lethal pandemic.

Osama bin Laden has been dead for a decade. Saddam was hanged in 2006. The forever wars -- the Afghanistan one being the longest in U.S. history -- now are over or ending. The days of Russia tactically enabling the U.S., and China not standing in the way, petered out. Only the phoenix lasts.
------
Rising reported from Bangkok; Knickmeyer and Woodward from Washington. AP National Security Writer Robert Burns contributed to this report.
------
For an in-depth look at AP's coverage of 9/11 and the events that followed, read "September 11: The 9/11 Story, Aftermath & Legacy," available now.