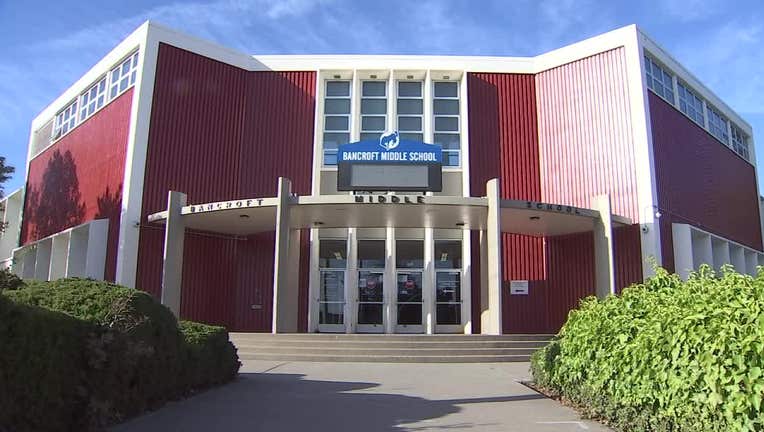 A teacher at Bancroft Middle Schhol in San Leandro can be heard making threatening remarks directed at students in recordings from the classroom.  (KTVU FOX 2)

SAN LEANDRO, Calif. - One of the targets of a San Leandro teacher's threatening remarks is telling his side of the story.

The Bancroft Middle School teacher is on leave after recordings were leaked on social media in which he told his class "I have shot kids younger than him," and expressed regret that he's not allowed to put his hands on a student. Now, that student, Jahsyr Love, is speaking out.

At one point in the recording, the teacher is directing his angry rant at 13-year-old Jahsyr.

Love's mother, Syrena Love, said the incident happened on March 9. The school told her that her son had been kicked out of class for not listening to his teacher. The teacher called campus security to have him removed.

Love said she didn't know how serious the incident was until a classmate sent her son a recording from that day.

The teacher can be heard in the recording saying "You’re lucky things have changed, Jahsyr, and I can’t put my hands on you and take you out of here myself."

The teacher is also heard talking about Jahsyr to the class, telling them, "I’ve been through three tours in combat in the most dangerous places on earth, and I am not in a position to let some kid talk back to me. Period. That’s just how it is. I have shot kids younger than him."

LISTEN TO THE RECORDING BELOW

A San Leandro middle school teacher has been put on leave after recordings surfaced in which he made disparaging and threatening remarks directed at students. Listen here to hear what he said.

In the recording, students are shocked by the statement and yell "Wow, you've shot kids?"

The recording continues after Jahsyr leaves, at which point the teacher calls Jahsyr a jerk, joker and idiot. He also said the 8th grader will end up a rapper or a fry cook, and he suggests he will get gunned down.

"That jerk came in here and started messing up the dynamic of my class," the teacher said. "So yeah, I’m pissed off."

Jahsyr, who appeared quiet and polite during an interview with KTVU, has been staying home from school. He said he's disturbed by it all.

"I really don’t want to go. I don’t feel comfortable in his class," he said. "I wouldn’t expect a teacher to speak like that at all."

"I hope he changes or something," Jahsyr Love said. "He deserves to be fired I think, because he’s just not a good teacher, talking to students like that."

A middle school teacher in San Leandro has been removed from the classroom after allegedly directing threatening remarks at his students. The Bancroft Middle School teacher's comments in the class were apparently all recorded and posted to social media.

Syrena said she's not confident in the school's ability to protect her son.

"Hearing that video breaks my heart every time. I wish it didn’t happen, but it did, and I want him, I want that teacher, he does not need to be teaching students," said Love.

She said the school has known about the teachers' inappropriate outbursts because other incidents have happened. But the school didn't reprimand the teacher until the recordings were leaked on social media.

If the teacher is not fired, Love said she will not be sending her son back to that school.

"You don’t downplay stuff like this, especially when someone is threatening a kid," said Love.

The recording leaked is a combination of two incidents with one part of it directed at Jahsyr. The teacher is also heard warning another student about getting beat up in high school.

"You’re probably about 20% undersized for your age, so I suggest when you get into high school you learn how to shut your mouth because guys like me who are way, way bigger than you are going to pound your butt into the ground," the teacher is heard telling the student.

The San Leandro Unified School District won’t release the name of the teacher, saying that it's an active investigation. A representative did say he will not be returning to the classroom or campus during the investigation.

KTVU also reached out to the teacher, but has not received a response.