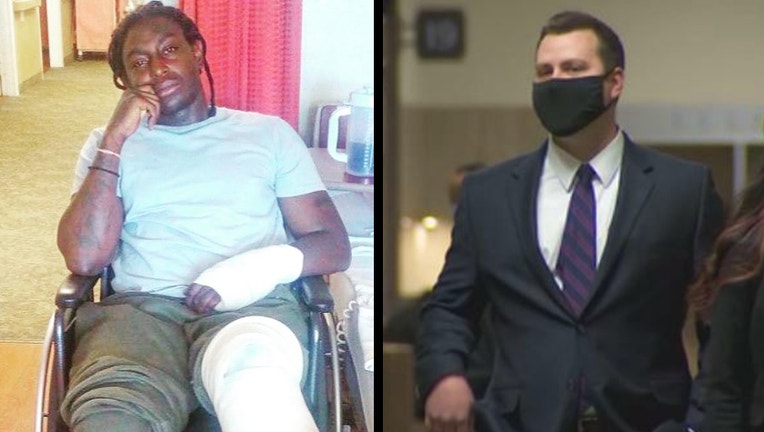 SFPD Officer Terrance Stangel (right) is accused of excessive force in the beating of Dacari Spiers (right) on Fisherman's Wharf in 2019.

SAN FRANCISCO - A San Francisco jury on Monday handed down a not guilty verdict in the closely watched trial of a police officer who was accused of excessive force for beating a Black man on Fisherman’s Wharf more than three years ago.

The jury found San Francisco Officer Terrance Stangel not guilty on three counts of brutality. A mistrial was declared on the fourth count, which the jury deadlocked on.

"For the DA to turn around and focus all these types of resources on prosecuting a peace officer who was out there trying to help the public is a travesty, and it’s dangerous for public safety in San Francisco," Stangle's defense attorney, Nicole Pifari, said outside court after the verdicts were read.

A San Francisco jury on Monday handed down a not guilty verdict in the closely watched trial of a police officer who was accused of excessive force for beating a Black man on Fisherman’s Wharf more than three years ago.

The prosecution and defense will return to court on Tuesday to resolve the count of assault under color of authority. Prosecutors can refile the charges or drop them.

District Attorney spokeswoman Rachel Marshall thanked the jury for their service and defended the office's decision to charge the case.

"This case is a reminder of the uphill battle to hold police accountable," she said. "We saw a lot of those obstacles play out in this case."

While felony assault charges are not unusual against civilians – the case against Stangel was momentous on several fronts: It appears to be the first case against an on-duty San Francisco police officer for excessive force, and for many police accountability advocates, the prosecution stands as test for District Attorney Chesa Boudin’s campaign pledge to be tougher on cops in cases of brutality.

The episode at the center of the case unfolded in October 2019, when Stangle and his partner responded to a domestic violence call and encountered Dacari Spiers with his girlfriend. Within seconds of arriving on scene, Spiers was on the ground with Stangel delivering at least seven blows with a metal baton that left Spiers with a broken wrist and leg.

But many pro law enforcement groups saw the case as a massive overreach by Boudin’s office. They’ve not only defended Stangel for his actions, but said the district attorney’s office sought to minimize Spiers behavior that night in order to bolster their own case.

During her closing argument, Pifari called the trial a "political prosecution" and accused the team of assistant district attorneys of being "liars."

"They’re putting him through a criminal trial for being a human being and facing a dangerous and violent situation on behalf of his community," Pifari said.

Even before the trial began, the case was already making waves in San Francisco. During a pretrial hearing following a motion to dismiss the case by the defense, district attorney investigator Magen Hayashi took the witness stand and testified that she was told by prosecutors to remove details about Spiers abusing his girlfriend from Stangel’s arrest warrant.

Her testimony and other revelations during pre-trial arguments frustrated Police Chief Bill Scott who said his office has been repeatedly stonewalled by the district attorney’s office in cooperating with investigations.

He then announced he would be severing an agreement that gave lead authority to the district attorney’s office to investigate police shootings and brutality cases. Scott and former District Attorney George Gascon developed the agreement amid ongoing police reform efforts that the chief has ushered in since being appointed five years ago.

Both sides agreed to keep a temporary deal in place while they work to negotiate a new memorandum of understanding between the offices.