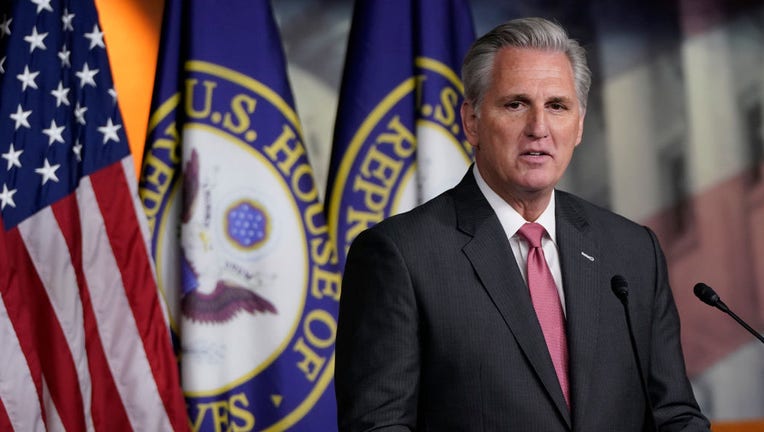 In the recording of a Jan. 10, 2021, House Republican Leadership call posted by the Times on Thursday night, McCarthy is heard discussing the Democratic effort to remove Trump from office and saying he would tell Trump, "I think it will pass, and it would be my recommendation you should resign."

It’s unclear whether McCarthy, who is in line to become House speaker if Republicans gain control during the fall midterm elections, followed through on his thinking or was merely spit-balling ideas shared privately with his colleagues in the aftermath of the deadly Capitol assault.

In the same conversation, McCarthy told his colleagues he doubted Trump would take the advice to step aside.

"That would be my recommendation," McCarthy is heard saying in response to question from Rep. Liz Cheney, R-Wyo., who would emerge as a staunch Trump critic. "I don’t think he will take it, but I don’t know."

Earlier Thursday, after the Times published its initial story describing the conversation, McCarthy released a statement calling it "totally false and wrong." His spokesman, Mark Bednar, had told the newspaper, "McCarthy never said he’d call Trump to say he should resign."

The audio threatens to badly damage the relationship between McCarthy and Trump, who remains the most popular figure in the Republican Party, despite his role in inciting the Jan. 6 insurrection and his refusal to accept the results of the 2020 election. And it could threaten McCarthy's standing with House Republicans aligned with Trump, whose support he will need for votes to become House speaker next year.

The audio depicts a very different McCarthy from the one who has been leading House Republicans over the last year and a half and who has remained allied with Trump even after delivering a speech on the House floor shortly after Jan. 6, during which he called the attack on the Capitol "un-American." At the time, McCarthy called the assault among the saddest days of his career and told his fellow Republicans that Trump "bears responsibility" for the violence.

Even after the violence, though, McCarthy joined half of the House Republicans in voting to challenge Joe Biden’s election victory.

Since then, the California Republican has distanced himself from any criticism of Trump and has avoided directly linking him to what happened. Within weeks of the siege at the Capitol McCarthy said he did not think Trump provoked the attack, as other prominent Republicans said at the time.

McCarthy indicated during an interview with The Associated Press this week in California that Trump will motivate voters to turn out for the party in this fall's midterm elections.

"He’ll motivate, get a lot of people out," McCarthy said at a GOP event in Fresno.

The Times report Thursday was adapted from an upcoming book, " This Will Not Pass: Trump, Biden and the Battle for America’s Future," by Times reporters Jonathan Martin and Alexander Burns.

In the audio, Cheney, who eventually lost her No. 3 leadership position after voting in favor of Trump's impeachment, can be heard asking McCarthy about a 25th Amendment resolution calling for Trump’s ouster and whether Trump might resign.

"I’ve had a few discussions. My gut tells me no. I’m seriously thinking of having that conversation with him tonight," McCarthy is heard saying. "What I think I’m gonna do is I’m gonna call him."

"I think it will pass and it would be my recommendation he should resign," he later adds. "I mean, that would be my take but I don’t think he would take it. But I don’t know."

McCarthy, 57, has been strategically charting his own delicate course as he positions himself to try to take over as speaker if Republicans retake the House. He has begun to build out his leadership team and last summer tasked several groups of Republican lawmakers with drafting proposals on the party’s core legislative priorities in hopes of making a fast start in 2023.

But even as he inches closer to leading the chamber, McCarthy is well aware of the downside of power in recent months as hard-right members of the conference have created headaches with inflammatory actions and statements.

There was little immediate reaction Thursday night from fellow Republicans who could determine his future.

To be sure, no other Republican leader in the House has amassed the standing to challenge McCarthy for the leadership position.

McCarthy has recruited the class of newcomers bolstering GOP ranks and raised millions to bolster Republican campaigns. He has drawn his closest rivals into the fold even as he works to shore up the votes that would be needed to become speaker.

An outside group aligned with McCarthy has led fundraising ahead of the midterm elections, and rank-and-file Republicans working to regain the House majority are unlikely to be critical of the leader ahead of November.

Still, McCarthy has also been a person of interest for the House committee investigating the storming of the Capitol on Jan 6. The select committee, which Cheney vice-chairs, requested an interview with McCarthy in mid-January, hoping to learn more about his conversations with Trump "before, during and after" the riot.

They had also sought information about McCarthy’s communications with former White House chief of staff Mark Meadows in the days before the attack. Hours after the request was made, McCarthy issued a statement saying he would refuse to cooperate because he saw the investigation as not legitimate and accused the panel of "abuse of power."

The committee has been especially focused on McCarthy’s communications with Trump and White House staff in the week after the violence, including a conversation with Trump that was reportedly heated.

Without his cooperation, it remains unclear whether the panel will be able to gain testimony from McCarthy or any other congressional allies of Trump. While the committee has considered subpoenaing fellow lawmakers, they have so far avoided doing so as it would be an extraordinary move and could run up against legal and political challenges.