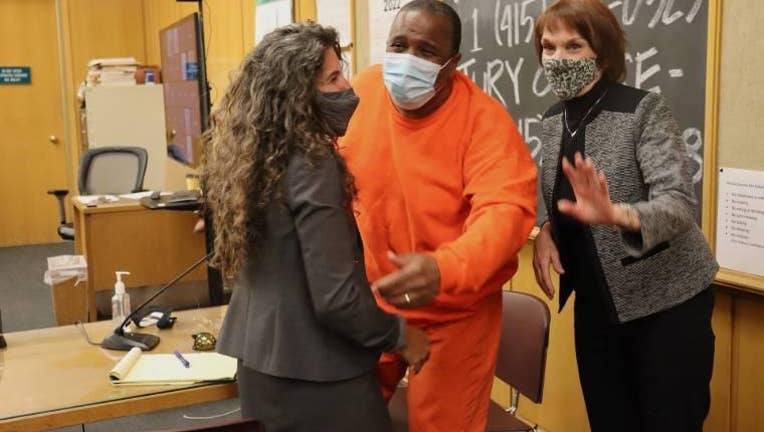 SAN FRANCISCO - A 61-year-old man who had been in prison for three decades after being wrongfully incarcerated for the murder of his friend was released from San Francisco jail on Wednesday.

The ruling by Judge Brendan Conroy came 32 years to the day after Ciria was arrested for murdering Felix Bastarrica—who had actually been killed by a mutual acquaintance of the two men, according to his attorneys.

The ruling was supported by District Attorney Chesa Boudin after the Northern California Innocence Project and attorney Ellen Eggers brought the case to the DA’s Innocence Commission for review.

"We are delighted for Joaquin, who fought for so long to clear his name," said innocence project attorney Paige Kaneb, who joined Eggers in representing Ciria in 2020. "He can now spend time with his 32-year-old son, who was a baby when his father was wrongfully taken away from him."

Ciria was convicted of the 1990 murder after the real killer started rumors that Ciria was guilty of the crime, his lawyers said.

Relying on the rumors, police immediately targeted Ciria and coerced George Varela—the man who drove the actual shooter to the crime—to falsely blame Ciria. Although he originally told the truth about Ciria’s innocence, when police told him he could either implicate Ciria or be charged with the murder, Varela succumbed to the pressure, his attorneys said. In a recorded interview, Varela agreed to be a witness against Ciria and testify to "whatever (police) said."

Based primarily on Varela’s perjured testimony, Ciria was found guilty and sentenced to 31 years to life.

Ciria’s exoneration was enabled due to "newly discovered evidence" including testimony and an eyewitness account of Ciria’s innocence that his attorneys presented to the court.

More specifically, an eyewitness who had been imprisoned for an unrelated crime finally came forward in 2020 to say that he saw and heard another man, Candido Diaz, arguing with the victim at the scene.

After the gunshots, the eyewitness ran into the alley and saw Diaz get into Varela’s car and flee the scene of Bastarrica’s murder.

Thirty years later, after the eyewitness was released from prison, he finally revealed the truth, Ciria's lawyers said.

He sought out Ciria’s and Bastarrica’s families to reveal for the first time that Diaz had killed Bastarrica, his lawyers said.

Ciria’s reversal was also bolstered by a declaration from his former defense attorney admitting to mistakes, such as not playing the coercive portions of Varela’s recorded interview during the trial and failing to call Ciria’s alibi witnesses who have maintained for over three decades that he was at home with them and his newborn son, his lawyers said.

His lawyers noted that this case has taken unusual turns, including when a judge ruled last September that despite Boudin’s determination in June 2021 that Ciria was innocent there was no legal precedent requiring a judge to overturn a conviction on that basis.

That led to long delays in Ciria’s petition challenging his conviction, and then a highly unusual evidentiary hearing on March 21 at which both the parties—prosecution and defense—argued for Ciria’s release, his lawyers said.

"This tragic case shows us once again why our system of justice needs robust checks and balances, as well as meaningful reform," said Linda Starr, executive director of the innocence project.

Ciria intends to spend quality time with his son, his wife, and his longtime friends and supporters.