An Orinda homeowner is flabbergasted by a bill and a long list of charges he received from Pacific Gas and Electric (PG&amp;E) for a gas-line repair on his property.

ORINDA, Calif. - An Orinda homeowner is flabbergasted by a bill and a long list of charges he received from Pacific Gas and Electric (PG&E) for a gas-line repair on his property.

The unexpected charges totaling $4,685 arrived in the mail three months after a contractor accidentally struck the line while replacing a fence. It’s that mistake that is now costing Justin Lewis.

“I get a bill out of the blue…I was pretty shocked,” he said. “It’s quite excessive given how quickly they were able to fix it.”

PG&E considered it an emergency repair, which took place on a July evening after 6 p.m. Contractors were replacing a post in the exact same spot as the original one, but damaged the underground natural gas line, causing a leak. Lewis said he immediately called PG&E and crews arrived within the hour.

“Never once did they ever say anything about me being responsible for it,” Lewis said. “They were here before 7 o’clock and they were essentially done by 8 o’clock.”

A photo does appear to show the repair couplings in place and the leak fixed just minutes after 8 p.m. Still, PG&E timecards show the workers logging two additional hours of repair time. On top of that, there are charges for construction double-time, travel time and missed meals. 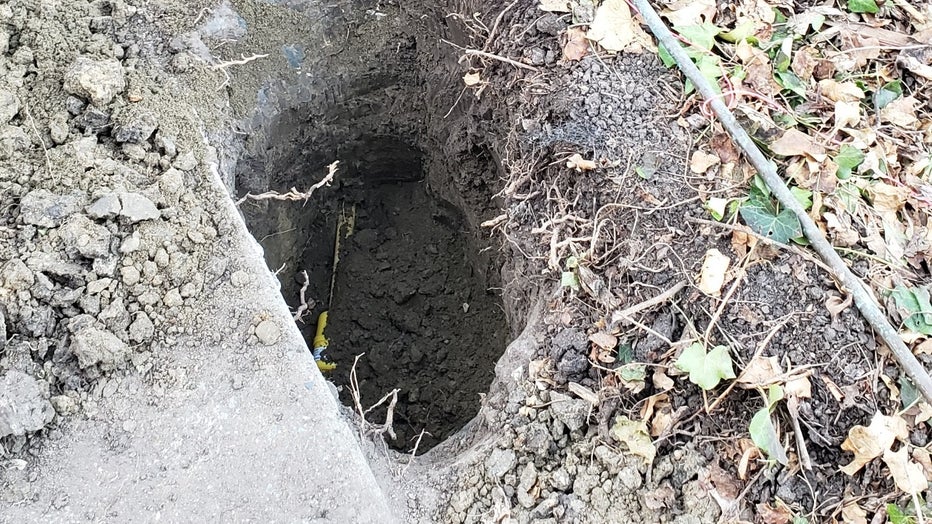 Lewis has a career in calculating damages for litigation and said he’s not against paying for the repair. But he doesn’t understand the baffling charges he sees with no support to back them up.

“It’s a complete mystery as to what they were charging me for,” Lewis said. “I worry about the next guy who has no idea what indirect labor is or what overhead is.”

The utility also criticized Lewis for using an unlicensed contractor who failed to call 811 prior to digging so the lines could be marked and damage could have been0 avoided. As a result, the liability falls on the homeowner.

But confusing charges and billing for things like “mapping,” “field services,” “working stock” and “spoils” calls into question where repairs end and PG&E costs or profits begin. 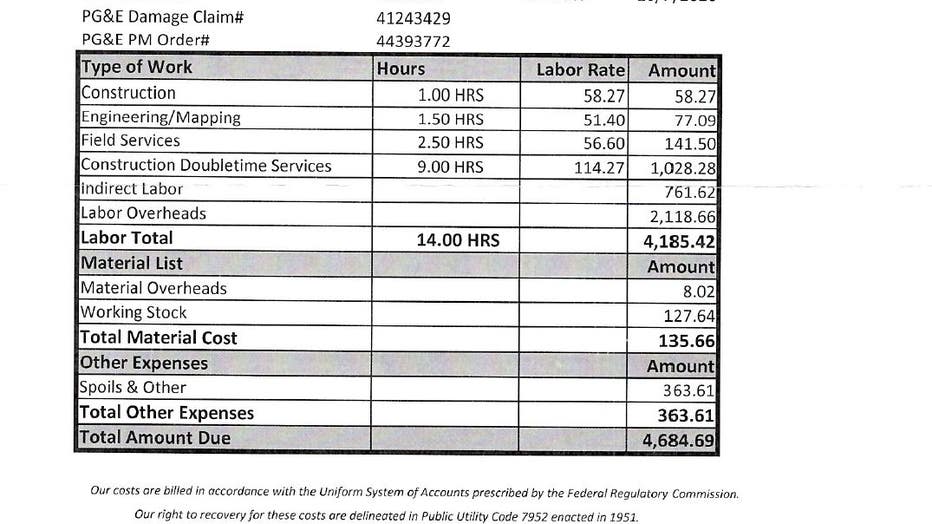 “It sounds as if PG&E might have padded the bill they sent this customer,” Mandy Spatt with The Utility Reform Network said. “We have seen this again and again and you just can’t trust these companies.”

She suggested consumers go through each and every bill line by line and contest charges that don’t seem right. Additionally, customers can file a complaint with the CPUC.

Lewis has filed one of those complaints upon learning he was even charged $363 for his own dirt on his property. He is waiting to see what comes of the complaint but characterized most of the costs as overstated.

“The dirt was mine. It was already dug out. It was my dirt. They just put some of it back in the hole.”

PG&E has reviewed his case and told KTVU the materials and time are accurately added into the bill. Additionally, a spokesperson said its crews aren’t waiting around for damages to occur.

The utility did offer to knock off $1,400 from the total bill as a compromise if Lewis agreed to pay more than $3,200 by the end of the month.

“It’s more than my mortgage payment every month. Almost double,” he said. “For an hour’s worth of work it seems a bit excessive.”

Lewis instead counteroffered, saying he'd pay $500 or $1,000 to PG&E for the repair, but the utility refused.

While he could file an insurance claim, Lewis said his deductible is more than the bill itself.

PG&E would not provide support or a breakdown to KTVU of the labor overheads and indirect labor, but said the costs associated with labor, materials, supervision, supplies, tools, transportation, and general expenses are determined by the utility under state code.