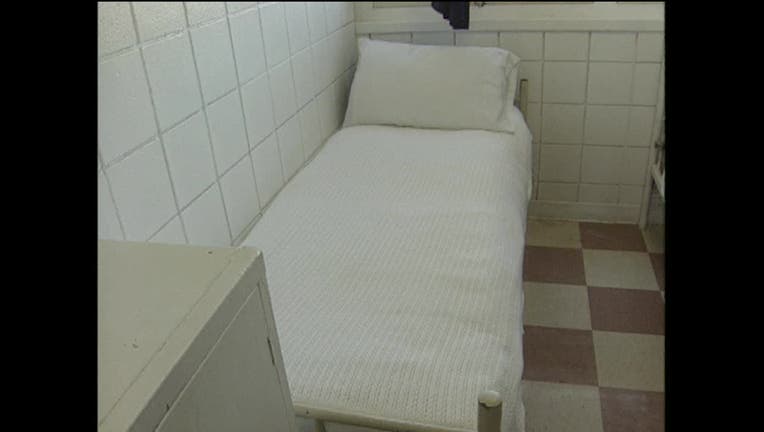 A dorm bed at FCI Dublin.

OAKLAND, Calif. - When the trial for former FCI Dublin warden Ray J. Garcia begins on Monday, more than 50 sexually explicit photos will be sealed to protect the dignity of the incarcerated women who will testify that they were targets of his abuse.

In addition, the six women who will tell their tales to the jury will only be identified by Ms. and their first name, to ensure there is no retribution, U.S. District Court Judge Yvonne Gonzales Rogers ruled ahead of opening statements.

Garcia is only formally charged with abusing the first three women between December 2019 and July 2021, but jurors will hear from another three who will testify that he groped them and told them to pose naked or in provocative clothing.

In August, U.S. attorneys charged Garcia in an eight-count superseding indictment with the sexual abuse of a ward and conducting abusive sexual contact with three incarcerated women – and then lying about it -- while he was associate warden before being promoted to warden in November 2020.

For two years before his 2021 arrest, Garcia led training on the Prison Rape Elimination Act and trained all newly arrived supervisors on these procedures and policies.

All sexual activity between a prison worker and incarcerated people is illegal as there is no scenario in which men or women behind bars can give consent. The federal crime is called "sexual abuse of a ward."

Garcia is one of five correctional officers charged with sex crimes at FCI Dublin, and he is the first of those to go to trial. Three other officers have pleaded guilty. One has been sentenced to seven years in prison.

Over the last year, KTVU has spoken with nearly 40 incarcerated and formerly incarcerated women who have said they were either sexually assaulted, witnessed these assaults and retaliated for speaking out about the abuse.

"This trial is a really, really big deal," San Francisco attorney Kara Janssen said ahead of opening statements. "I cannot recall something like this ever happening."

Janssen's firm, Rosen Bien and Galvin & Grunfeld, sued FCI Dublin in 1995 over the sexual abuse of three women and no officers were charged back then. Her firm is now working with Centro Legal de La Raza in Oakland to counsel incarcerated sex abuse survivors at FCI Dublin. She is now representing some of the women who are testifying against the warden.

Garcia is being represented by James Reilly, who has repeatedly declined comment.

In court documents, Garcia's defense has argued to limit the number of explicit photos – including 27 of the warden's penis on his prison cell phone – arguing that entering so many of the same picture is redundant and should be capped at "two or three."

Court filings also indicate the defense plans to argue that Garcia took pictures of one of the women because he wanted documentation that she was breaching policy by standing around naked.

During jury selection last week, Garcia indicated he would testify on his own behalf.

There are dozens of photos that are sexually explicit that will be introduced at trial -- many of which were taken without knowledge or consent of the women.

For example, Victim 1 will testify that Garcia made her undress for him while he did his rounds and he took photographs of her on his cellphone. He showed her several photographs of his penis; at least one of them had semen coming out of it, prosecutors said.

Victim 2 will testify that Garcia promised he would sign her compassionate release paperwork, and told her he wanted to be with her when she was released from prison. On one occasion, Garcia took her hand and placed it on his penis. On another occasion, Garcia touched her breasts, court documents state.

Victim 3 is expected to testify that while she was at a halfway house, she video-chatted with Garcia on several occasions. On at least one occasion, Garcia undressed and touched himself and told her to undress and touch herself. The government intends to introduce several photographs seized from Garcia’s personal computer that depict these screenshots.

Before trial, prosecutors Mollie Priedeman, Andrew Paulson and Casey Boome persuaded the judge that the "nature of the exhibits in question are undeniably sensitive and the victims will be re-traumatized by the disclosure of the photographs to members of the public…Indeed, sealing these exhibits is necessary to maintain "respect for the victim’s dignity and privacy."

Since the judge agreed, she also ruled that since the images will be sealed, they must be described with "sufficient detail for purposes of public information, access, and transparency."

Each photograph admitted into evidence will be slipped into a clear sheet protector, inserted in a three-ring binder and then placed in a sealed envelope for the remainder of the trial, the judge ruled.

The courtroom will keep the binder sealed and then deliver it to the jury each day during deliberations.

Also, the judge ruled, all computers that will face the jury or the public will have protectors to limit visual access to the evidence on the screens.