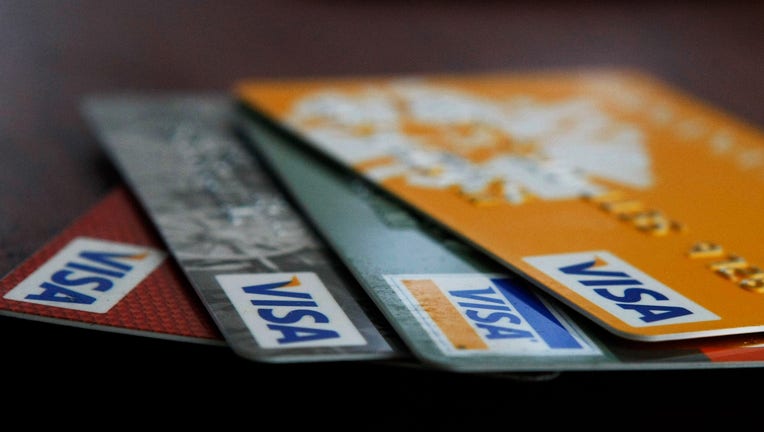 SAN FRANCISCO - FEBRUARY 25: Visa credit cards are arranged on a desk February 25, 2008 in San Francisco, California. Visa Inc. is hoping that its initial public offering could raise up to $19 billion and becoming the largest IPO in U.S. history. (Ph

CHARLOTTE, N.C. - Visa Inc. said Wednesday that its fiscal fourth quarter profits dropped 29% due to fewer dollars crossing on its namesake payment network while the world was in the grips of a pandemic-caused recession.

Visa recognizes revenue from the quarter before, so the payments activity that ended June 30 is reflected in the profits that the company reported Wednesday. The April 1 to June 30 period was when the U.S. and the rest of the world was being hard hit by the pandemic's outbreak, so payments and transactions plunged sharply.

During the period, Visa had $2.493 trillion in payments on its network, down 11.9% from same period a year earlier. The number of transactions also plunged sharply, down 23.6% from the quarter before.

Visa earns a fee off of every transaction that runs on its network, be it credit cards or debit cards. It was particularly impacted by a drop in gasoline sales, since debit cards are the most common form of payment method at gas stations.

Visa did see payments volume increase in the July 1 to Sept. 30 period, as the U.S. and the rest of the world started reopening, but those revenues will not be recognized until the end of the year. Travel expenses remain particularly depressed, the company said.

Mastercard, Visa's biggest competitor, also reported a decline in profits and revenue due the COVID pandemic. It said cross-border payments were down 36% from a year earlier, mostly due to the pandemic bringing travel and other cross-border transactions to a standstill. Like Visa, Mastercard said it saw modest improvements in payments in the last 90 days, as more governments reopen their economies and people tried to return to normal patterns of spending.

Visa declined to give a fiscal 2021 profit outlook, saying the pandemic has made forecasting next year's business conditions effectively impossible.