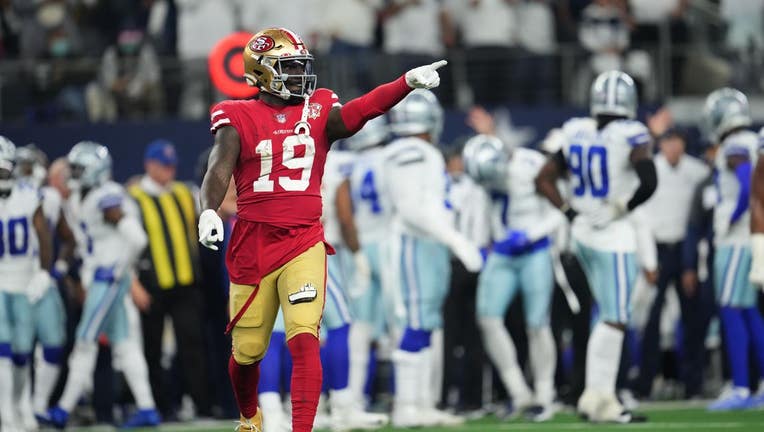 Deebo Samuel #19 of the San Francisco 49ers points down field against the Dallas Cowboys during an NFL wild-card playoff football game at AT&T Stadium on January 16, 2022 in Arlington, Texas. (Photo by Cooper Neill/Getty Images)

Santa Clara, CA - It doesn’t get much bigger than this.

On Sunday, one of the NFL’s longest running rivalries – the San Francisco 49ers and the Dallas Cowboys – take center stage at Levi’s Stadium.

The upcoming game will be the ninth time the two teams have met in the postseason, so the excitement is high, the stakes are high, and ticket prices are high!

Fans streamed in and out of Levi’s Stadium all day of Friday, snapping 49ers gear and getting ready for the showdown on Sunday.

Fans said they have confidence in rookie quarterback Brock Purdy to get the job done for the team and "The Faithful."

"My team is going to beat the Cowboys" said fan Mel Alonzo from San Francisco.

Fan Marvin Berdinsky traveled all the way from Florida to watch the game and said he's been a 49ers fan since he was a child growing up in Marin County.

When asked what he expects on Sunday, Berdinsky said, "Oh domination. Really it's payback. It couldn't be any better with having Seattle last week, which we have a great rivalry with them now, and Dallas which for me goes back to '72." 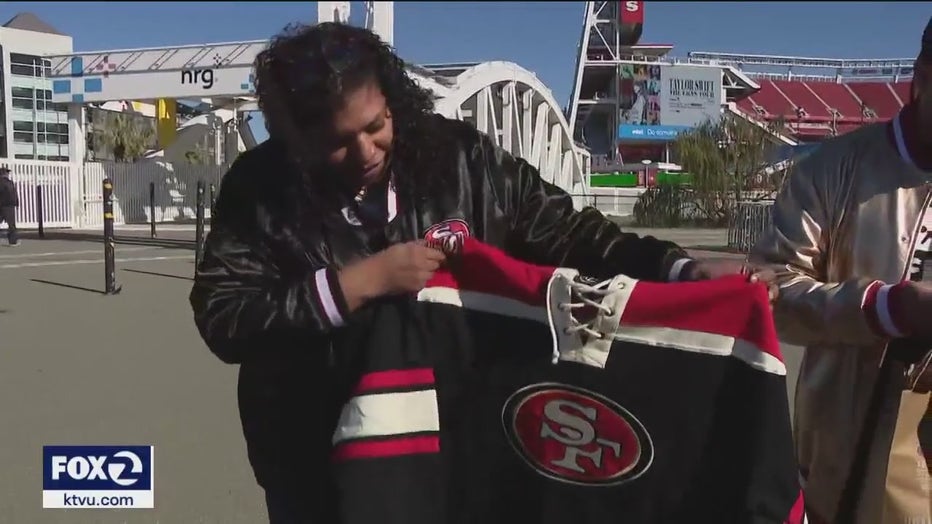 A 49ers fan shows off her paraphernalia ahead of Sunday game against the Dallas Cowboys.

One fan with unique perspective is Jamil Williams, who is the vice president of the 49ers fan club of Dallas-Fort Worth.

Williams is in the Bay Area for Sunday's game and says it's not hard being a 49ers fan in Texas.

"We have thousands of 49ers fans in Texas. They know that. We showed that last year during the playoffs when we took over their stadium," he said.

The upcoming game is sold out with the least expensive resale tickets this week going for about $500.

For those who can't get to the game – and don’t want to just sit at home – the team has organized three official watch parties.

One of them will take place at San Pedro Social in downtown San Jose where there will be more than a dozen TVs, indoor and outdoor seating, and even a chance to partake in bowling or karaoke downstairs while watching the game.

"What they want is fans who are not going to the game to have the same experience. So there is going to be swag, raffles, giveaways," said Jess Moreles, operations manager for the MDM Hopitality Group which owns San Pedro Social.

As for the rivalry, the 49ers-Cowboys ninth playoff appearance is a tie for the most number of matchups between any two teams in the Superbowl era.

Head Coach Kyle Shanahan said on Friday the team watched videos of some of the great moments in the rivalry.

"We had a big deal today, just going back and showing our players the history of the 49ers. We started with the ‘82 game, ’The Catch' and everything, and then we showed them the ‘92 game, the ’93 game the '94 game, just to see all of that history and so everyone has an idea of what Dallas and the Niners mean to people," said Shanahan.

Shanahan also said the presence of fans, from both near and far, is a big boost to the team.

"I'm not trying to be cheesy and say the fans are everything, but they are. I mean that's why we all love football, but we also all love making a living and supporting our families and that's because the fans love this sport," he said.