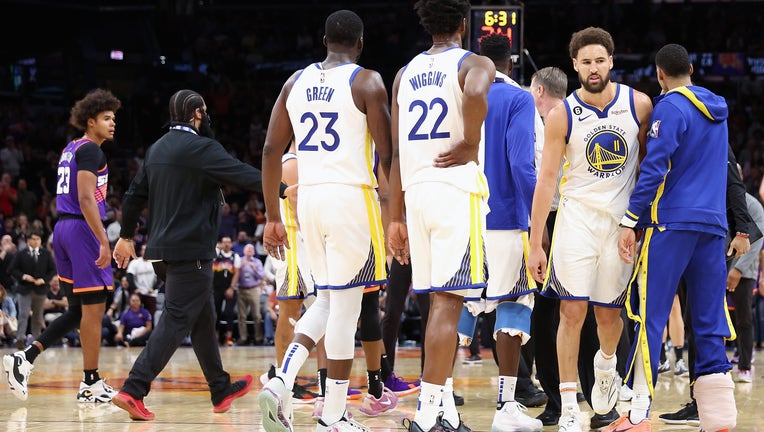 PHOENIX, ARIZONA - OCTOBER 25: Klay Thompson #11 of the Golden State Warriors reacts after receiving two technical fouls and a game ejection during the second half of the NBA game against the Phoenix Suns at Footprint Center on October 25, 2022 in Ph

Golden State Warriors superstar Klay Thompson was ejected from a game for the first time in his decade plus long NBA career on Tuesday night.

Thompson was tossed after back-to-back technical fouls in the third quarter of Golden State's 134-105 loss to the Phoenix Suns. Thompson was jawing with Suns superstar Devin Booker throughout the matchup. After the game, Booker told reporters Thompson kept repeating that he had four rings.

Things came to a head when Booker and Thompson bumped chests, which resulted in both being dealt technical fouls.

As Thompson headed toward the Warriors bench, Suns guard Mikal Bridges bumped into him. Thompson shoved Bridges resulting in a second technical for Thompson.

After the game, Draymond Green said there was chirping on both ends. Steph Curry said back and forth is part of the game.

"After he got thrown out, he had a lot more to say, which I love," said Curry. "I like that he's engaged in that respect because it matters to him."

Between both teams, seven technical fouls were handed out in the third quarter. Warriors Head Coach Steve Kerr and Suns guard Chris Paul were among others whistled.

There were no hard feelings between Thompson and Booker. When the game was over, Booker told reporters he admires Thompson's game.

"I love Klay Thompson and have for a long time, but that doesn't excuse us from being competitive," said Booker. "I've always admired his game, and how he plays on both sides of the ball, and the rings speak for themselves, but im going to bring it every single night."