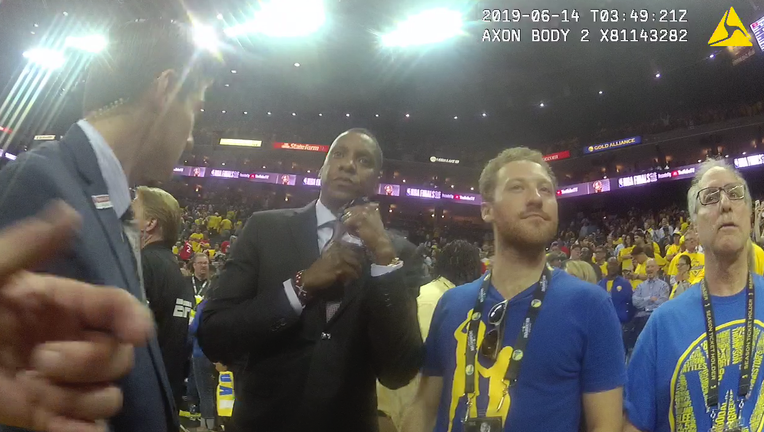 Masai Ujiri is about to walk on the court to congratulate his victorious Toronto Raptors. June 13, 2020

OAKLAND, Calif. - For the first time since a contentious lawsuit was dropped last week, Toronto Raptors President Masai Ujiri spoke out regarding a shoving scuffle with an Alameda County sheriff’s deputy at Oracle Arena in June 2019.

In two separate tweets on Monday, the Raptors shared a video of Ujiri thanking his supporters and also a text statement. Now that the nearly two-year legal battle has been capped, Ujiri turned his attention toward work that still needs to be done outside of the courts.

"I have decided my fight isn’t a legal one," Ujiri said, in part. "Now, the challenge is this: What can we do to stop another man or woman from finding themselves in front of a judge or behind bars because they committed no crime other than being Black?"

The physical altercation happened when Ujiri attempted to join the court and celebrate his team after beating the Warriors during the NBA Finals. Alameda County sheriff’s deputy Alan Strickland claimed that Ujiri did not provide proper credentials, but Ujiri said he did.

Strickland is seen on his body-camera video shoving Ujiri twice and telling him he had no authority to be there. Video first reported by KTVU shows that Ujiri shoved back after being provoked.

In the video released Monday on Twitter, which is dated August 16, 2020, Ujiri spoke for those who have or will go through a similar situation, but without the body camera footage or money for legal action.

Last February, Strickland filed a federal lawsuit alleging assault and battery against Ujiri. He said he suffered multiple physical injuries near his face. In a countersuit, Ujiri alleged that Strickland used excessive force against him and said he wouldn’t have been treated with such disrespect if wasn’t Black. After Strickland dropped his lawsuit on Wednesday, Ujiri dropped his countersuit.

In his video message with a somber tone, Ujiri said that he knows there are people who have gone through tougher situations and then pledged his commitment to do his part moving forward.

"I have to continue to do my part, for the youth, for the future generation. I have to. It’s an obligation as a human being," Ujiri said. "So when I look at this, I ask, ‘Who are we as people? Who are we as human beings?’"