Thousands of Warriors fans came out for the parade Monday, cheering on their team in one of the biggest parties that San Francisco has seen in years.

SAN FRANCISCO - After a storybook season, the Golden State Warriors are sharing their victory with Dub Nation with a parade. Some lucky fans got to get up close and personal with many of the team's biggest names.

The team has said Dub Nation was the sixth man out there, rooting on the Warriors through the good times and bad. Today, the Warriors shared their victory with a parade that drew tens of thousands of fans to San Francisco.

With the 2022 NBA championship series behind them, the Warriors had just one final official event to savor the season and share it with the fans. The celebratory parade rolled up Market Street with fans 20 and 30 deep along the parade route.

At one point, Juan Toscano-Anderson was one of the players who scrambled off the bus, going through the parade barriers and disappearing into the crowd. Not long after, he was spotted dancing and celebrating with crowd members — a moment that nearby fans said will last a lifetime.

"He just came in here, and he was just like celebrating with us," said one fan. "JTA! Whooooo!"

Coach Steve Kerr said sharing this moment with the fans is what it's all about.

"It's amazing, and we're doing it for a fourth time, it's incredible," said Coach Kerr. He now has nine championship rings, five as a player and four as a coach.

The crowd went wild as veteran players like Steph Curry hoisted not one but two trophies — the Larry O'Brien and the Bill Russell NBA Finals Most Valuable Player trophies — for the crowd to see.

Curry said while he played a leadership role on the court, it took a whole team and the entire Dub Nation to achieve this win.

"If you get good people doing good work and you have good leadership, good things happen," Curry said. "The fact that we have four championships to show for it, but the journey in getting to all four and all the people you talked about who believe in what we do and how we do it that's what will live longer than this parade and everything."

The crowd also clearly loved a comeback story, loudly cheering for Klay Thompson. The player spent much of the season in injury rehab, but he recovered just in time to make an impact on the finals. 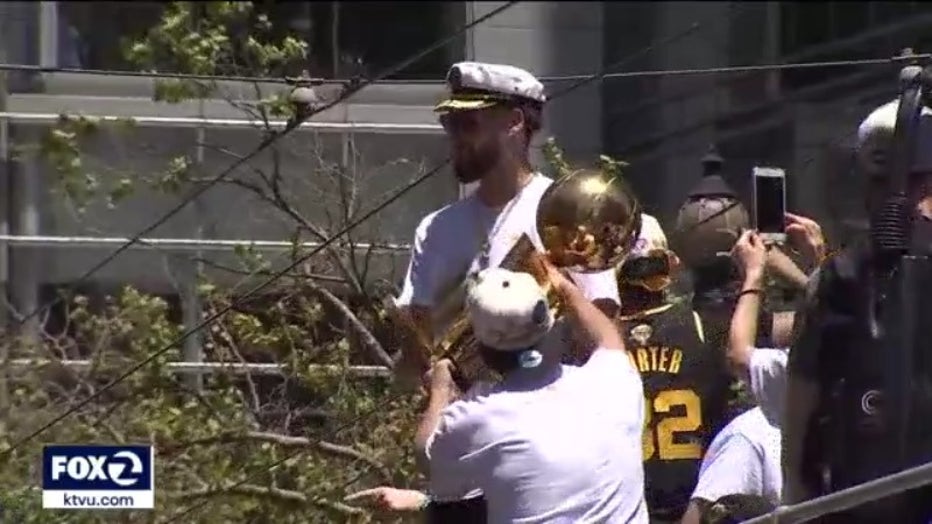 Jordan Poole, celebrating his first NBA Championship, said this moment only gets better when sharing it with Dub Nation.

Andrew Wiggins, who had a breakout performance in the series, agreed that this moment belongs to all of Dub Nation — on the court and off.

San Francisco transformed into a sea of blue and gold to celebrate this past season, and fans are already predicting that while this was the first NBA Championship in San Francisco's Chase Center, it will not be the last.