OAKLAND, Calif. - An Alameda County sheriff's sergeant who played Taylor Swift on the courthouse steps in Oakland will be investigated by higher-ups because it appears as though he was trying to avoid having his interactions recorded and uploaded to social media platforms.

Sgt. Ray Kelly, a department spokesman, said the actions of the sergeant, identified on the video as Sgt. Shelby, "is not something we condone or approve. We have a code of conduct all officers must follow," adding that the matter will be sent to Internal Affairs.

Kelly said that the sergeant was told not to engage in this behavior anymore.

"We have a code of conduct that governs how we should act in public," Kelly said. "This video brings that behavior into question. This is not acceptable. We've never seen this before."

Investigation: Why would sheriff's sergeant play Taylor Swift while being filmed?

An Alameda County sheriff's sergeant who played Taylor Swift on the courthouse steps in Oakland will be investigated by higher-ups because it appears as though he was trying to avoid having his interactions recorded and uploaded to social media platforms.

The issue revolves around what members of the Anti Police-Terror Project posted on YouTube Thursday, stemming from an interaction at the courthouse two days prior.

Sheriff's deputies had told members of the group to take down their banners in support of Steven Taylor, the man killed by San Leandro Police Officer Jason Fletcher in April 2020 while he was holding a bat in a Walmart.

Fletcher is now facing voluntary manslaughter charges for Taylor's death and Tuesday was his preliminary hearing. Members of the group were there in support of Taylor's family. 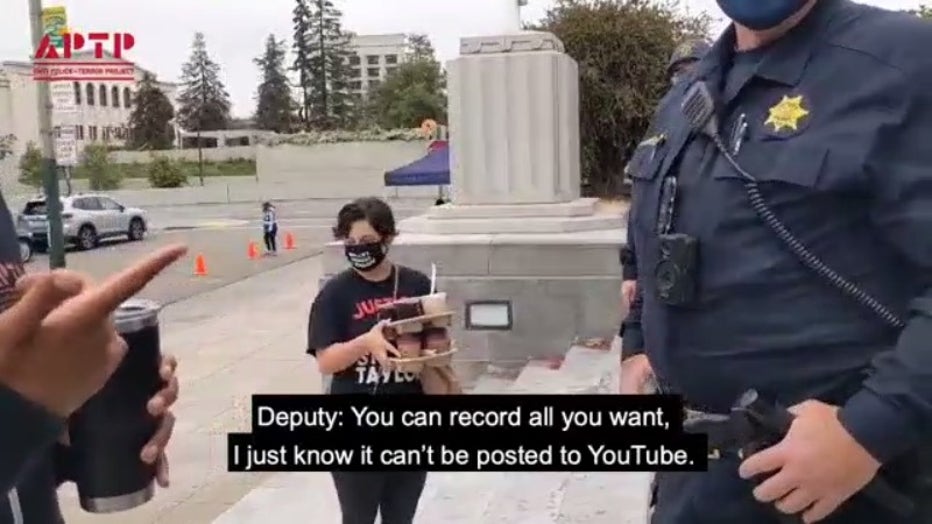 The group's policy director, James Burch, and the sergeant can be seen discussing the banner issue on cell phone video that one of the group's members filmed.

In the middle of the conversation about where the banners could or could not be placed, the sergeant pulls out his own cell phone and plays Taylor Swift's "Blank Space." He slides the cell phone in between the buttons of his shirt so that the music plays over their discussions.

Are you hosting a dance party? Burch asks.

Another protester asks: Are you trying to drown out the conversation?

The sergeant replies: "You can record all you want, I just know it can’t be posted to YouTube."

His comment was in reference to YouTube's policy, along with other similar policies by other social media companies, of taking down videos that violate copyright laws. Instagram also has these copyright filters, which shut down streams and videos based on background music.

This issue is not unique to this Alameda County Sheriff's sergeant.

In February, VICE News first reported that a Beverly Hills police officer played Sublime's "Santeria" in an apparent effort to avoid being live-streamed, using Instagram's copyright protection policies to prevent himself from being filmed.

The Electronic Frontier Foundation is not a fan.

"The bottom line is that YouTube’s automated copyright takedown systems are easily misused, including for official censorship like this," said EFF staff attorney Mitch Stolz.

"Police are public servants," he said. "And as you can see, it's not effective. The sergeant is getting way more publicity for himself this way as opposed to if he had not done this.

Taylor Swift did not immediately respond to the issue on her own social media accounts.

Kelly, the sheriff's spokesman, did say that the sergeant was not placed on administrative leave, because he believes this was a one-time affair.

He added that there is no specific policy that prohibits what the sergeant did, but there is a code of conduct that governs law enforcement in the course of their duties.

OTHER STORIES OF INTEREST: