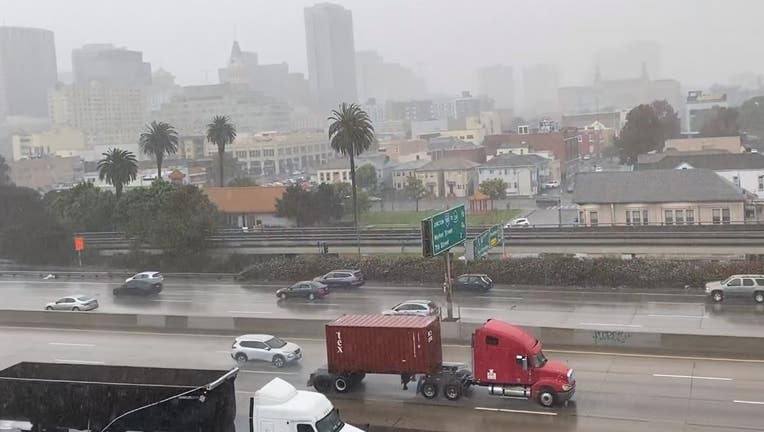 OAKLAND, Calif. - Rain may put a damper on some plans in the Bay Area this weekend, but it's good news for firefighters and the overall fire season outlook.

November has ushered in considerably colder temperatures, accompanied by frost advisories for parts of the North Bay.

Saturday will be mostly cloudy. Highs will be in the 50s to mid 60s. West winds will be 5 to 10 mph. There will be a chance of rain in the afternoon.

"I don't think it's going to come first thing in the morning. I think it's going to hold off," KTVU meteorologist Rosemary Orozco said in her forecast. Residents in the North Bay should see the rain first at around 1 p.m. or 2 p.m. Precipitation should move into the Central Bay or Peninsula area around 4 p.m. or 5 p.m.

National Weather Service says the expected rain should be light and should arrive with a weak boundary. They forecast more rain through early next week. "This is the first in a number of waves coming our way," said Orozco.

Paul Lowenthal, fire marshal from Santa Rosa Fire Department, joined KTVU on The Plus to talk about 2022's fire season and how the upcoming rain will impact the future locally.

Paul Lowenthal, fire marshal from Santa Rosa Fire Department, joined KTVU on The Plus to talk about 2022's fire season and how the upcoming rain will impact the future. "This is a beneficial fire system, especially after the concerns of our community following the devastating number of fires here locally over the last five years," he said. "This rain is exactly what we want to see."

Lowenthal was so optimistic that he said the upcoming rain could end fire season locally this coming week. Looking back at 2022 so far, he said we have lucked out in a number of ways. That includes the cooperation of the weather. While there were fires, the wind events and red-flag warnings didn't always materialize. He also credits the communities in fire-prone areas for doing their part to abate fire conditions. He said, while it's unfortunate, since 2017, people have learned from the fires in the North Bay that there are efforts they can make to create safer spaces.

"Prescribed fires is definitely something we're really pushing locally, not just here in Santa Rosa, but really around Sonoma County," Lowenthal said. He made the point that fire was feared in 2017, but it can also be beneficial.

Bay Area and California residents in certain wooded areas have become accustomed to what has become a year-round vigilance to fire danger. So other parts of the state may not be able to rest easy quite yet.

National Weather Service has said in the past that the long-term drought is acting like a long-term illness.

Meanwhile, there is a winter storm warning for the Sierra set to begin Sunday 4 p.m. through Wednesday 4 a.m. Places like Truckee and Tahoe could see 1 to 4 feet of snow by the end of it all.

Light rain this weekend and winter storm in the Sierra

The forecast calls for light rain to arrive in the North Bay Saturday afternoon and there's a winter storm warning for the Sierra come Sunday.