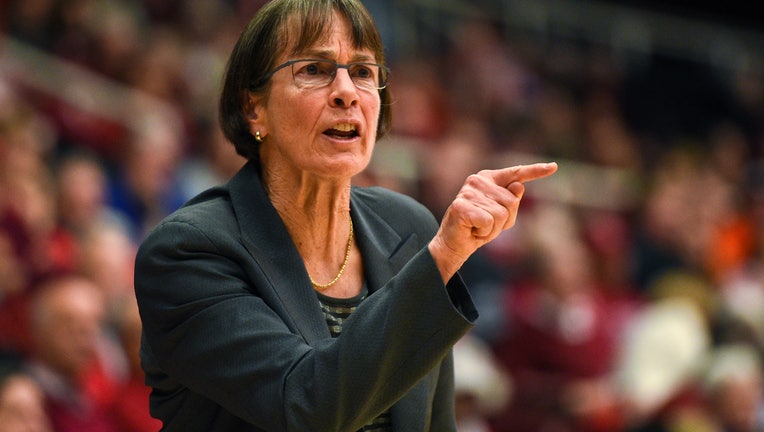 Add COVID-19 testing to the differences between the women's and men's tournaments that has coaches and players unhappy in Texas about what they say is a growing list of inequities.

The NCAA has run 6,230 tests with only one confirmed positive at the women’s tournament using daily antigen testing. The men are using daily PCR tests, considered more accurate. A few false positives have been quickly retested using the PCR test.

Stanford coach Tara VanDerveer and Setsuko Ishiyama, the Cardinal's director of women's basketball, issued a statement Saturday night upset at "evidence of blatant sexism" that is "purposeful and hurtful" leaving them feeling betrayed by the NCAA.

"Women athletes and coaches are done waiting, not just for upgrades of a weight room, but for equity in every facet of life," according to the statement. "Seeing men's health valued at a higher level than that of women, as evidenced by different testing protocols at both tournaments, is disheartening."

NCAA basketball administrators apologized Friday for the differences between the tournaments and vowed to do better after photos went viral highlighting the contrast between the women's weight room and the men.

But Stanford asked university presidents and conference commissioners for accountability on who made these decisions and why.

"This cannot continue to be business as usual," Stanford wrote on social media with the statement.

The NCAA followed recommendations of its COVID-19 medical advisory group, collaborated with the CDC and local medical authorities at each location for testing requirements. The NCAA advisory group said either daily PCR or daily antigen testing were "equally effective models for basketball championships."

The recommendation was to adopt the testing approach that worked best with the provider and local health officials. The director of the San Antonio Metropolitan Health District reviewed and approved using daily antigen tests and weekly PCR tests.

The NCAA noted both men and women required either the daily antigen or PCR testing for seven straight days before arriving in Indianapolis or San Antonio.

"To me, she’s the most exciting player in college basketball right now," Bird told ESPN. "I was like, ’Oh, Iowa’s on, let me turn this on. She’s exciting to watch."

Clark admitted to being a little star-struck when told Sunday of Bird's comments after leading Iowa to an 87-72 win over Central Michigan to open the women's NCAA Tournament. She grew up watching Bird, including a game against the WNBA's Minnesota Lynx, and trying to model her game after Bird.

"It's special she says that to me," Clark said, "and I think that's one of the biggest compliments you can receive."

When Michigan star Naz Hillmon was younger, she had to ask her mom what it meant when people called her an All-American.

Her daughter, the Big Ten’s player of the year, got to learn all about All-Americans when she was named last week to The Associated Press second team.

"Me and my mom have a very competitive basketball relationship," Hillmon said. "And I’ve just been really kicking her butt with all the college accolades, ’cause I didn’t get to do that for all the high school stuff. But, we continue that competitiveness and she’s been very supportive through it all."

Hillmon, the first Wolverine in program history to earn AP All-America honors, is actually a third-generation college player. Gail Hillmon-Williams, Naz’s grandmother, played basketball at Cleveland State. She also hopes to follow in the footsteps of her uncle, Jawad Williams, who won a national title at North Carolina.

Arizona senior Aari McDonald penned a heartfelt post for The Players’ Tribune, dedicating the Wildcats’ NCAA Tournament to the seniors who missed out last year.

McDonald herself contemplated moving on to the pros last year, when the season was shut down by coronavirus. But her mind kept returning to the seniors and a proper send-off that never was.

"When I thought about our seniors, something didn’t feel right about me leaving school early. I really took that to heart," McDonald wrote. I wanted to come back and achieve more. I wanted to take this program somewhere it’s never been. That’s what I came here to do. I knew the job wasn’t done. So, this is for them. This is for our seniors who never got to see an NCAA tournament."

In addition to being the NCAA’s active scoring leader, she also leads the nation with an 86-game streak of scoring in double figures. She’s averaging 19.3 points, 5.1 rebounds and 4.3 assists this season.

"This is our time now," forward Cate Reese said. "This is Aari’s last year, Trinity’s (Baptiste) last year, Sam’s (Thomas) last year, so I think it’s exciting just to be able to finish off the season and finally get our answer of how the NCAA Tournament is and how we’re all going to be able to compete together on a higher level."