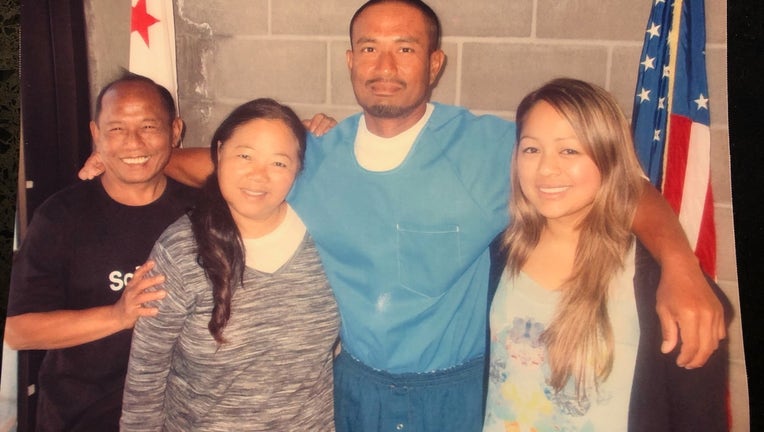 Bounchan Keola is with his parents. Their family fled Laos more than 30 years ago.

PINOLE, Calif. - A formerly incarcerated firefighter who battled a California blaze and was then in ICE custody awaiting his likely deportation to Laos has been released and is now living with his family in Contra Costa County.

Bounchan Keola, 39, who grew up in Richmond, was released from ICE custody on Wednesday, his attorney, Anoop Prasad from the Asian Law Caucus in San Francisco told KTVU. His parents and sister live in Pinole. He had been in federal custody in Kern County since October.

In a tweet from the Asian Law Caucus, Keola said: "I can't describe how good freedom feels after 22 years. Thank you to everyone who supported me & saw that I was more than my past mistakes. I hope@GavinNewsomwill see that too and decide to stop turning us over to ICE and pardon my fellow firefighter, Kao Saelee."

Prasad said that ICE was legally required to release him since Laos had not issued a travel document for his deportation.

"He’s never had a birth certificate or a passport and legally he doesn’t have citizenship in any country," Prasad said.

The Supreme court had held that ICE cannot indefinitely detain people that it cannot deport and that the agency must release people if they do not pose a danger or flight risk.

ICE had never argued that Boun posed either a danger or flight risk, Prasad said.

His legal issues are not over, though.

Keola reported to his parole officer on Thursday morning. And he will need to report to ICE next month. The deportation order remains in effect, however, so he could again be detained and deported if any country including Laos decides to recognize him as a citizen.

Keola is a legal resident of the U.S. after he and his parents fled Laos when he was 2 and settled in California in 1988. But federal law allows the deportation of immigrants with certain criminal convictions. He completed a prison sentence for second-degree attempted murder, voluntary manslaughter and assault with a firearm resulting from a gang-related shooting when he was 16.

His status as a lawful, permanent resident of the United States was revoked when he was convicted of these crimes.

While in prison, Keola also fought fires as part of the prison inmate firefighter program. He was crushed by a tree while battling the Zogg Fire in Shasta County on Oct. 2. ICE picked him up two weeks later.

While he is out of custody, Prasad said Keola wants to advocate for a halt to transfers to ICE and for pardons for himself and another Laotian immigrant like himself, Kao Saelee, who is currently being held in Lousiana.

"Unless he’s granted a pardon by the governor," Prasad said, "this basically will be hanging over him for the rest of his life."