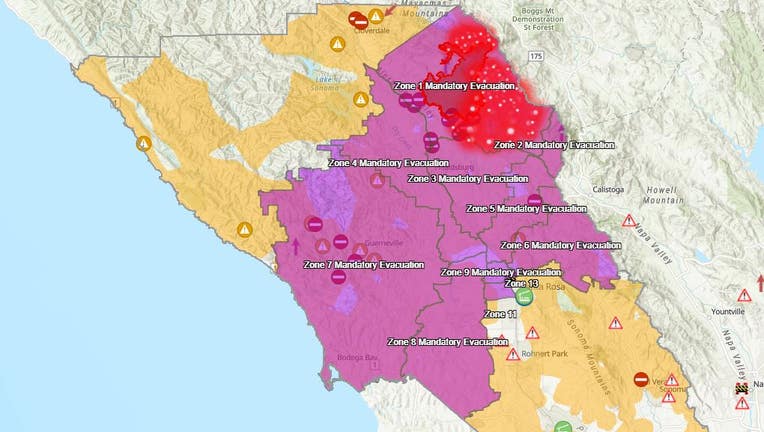 SANTA ROSA, Calif. - A total of 200,000 Sonoma County residents were under mandatory evacuation on Sunday morning, the "largest evacuation that any of us at the sheriff's office can remember," deputies tweeted.

Sheriff Mark Essick said that he heard from some residents that they thought the evacuation orders were overkill.

"I think those concerns are not valid at this point," he said at a Sunday morning news conference.

The number of evacuees doubled from overnight and is roughly three times the people who can fit in Levi's Stadium in Santa Clara. Sonoma County divided the area into 10 zones, and all -- including the entire cities of Geyersville, Healdsburg, Guerneville, Sebastopol, Bodega Bay -- were under mandatory evacuation. It seems as though most of the residents heeded the warnings: Their cities were ghost towns on Sunday.

The evacuations were a result of the rapidly growing Kincade Fire, which started burning Wednesday in the heart of Wine Country situated in the tiny community of Geyserville, and which spread to 54,298 acres by Sunday night - almost double what it was from the morning. By nightfall, firefighters had contained only 5 percent of the flames, down from 10 percent earlier in the morning. Gov. Gavin Newsom declared a state of emergency for the state of California because of the fires and extreme weather conditions spanning from the Kincade Fire to the Tick Fire in Southern California.  To that end, about 200 National Guard members were called in to help with more than 3,000 firefighters fighting the flames.

No injuries have been reported as a result of the Kincade Fire. But on Sunday, CalFire noted that 94 structures have been destroyed including at least 31 homes and 14 more have been damaged. The historic Soda Rock Winery was found engulfed in flames, though no official word on the extent of its damage was reported early Sunday. KTVU's cameras spotted structures burning on Chalk Hill Road near Highway 128 in Healdsburg on Sunday morning, including a home that was actively on fire.

The fire was concentrated between the west side of Highway 128 to HIghway 101 between Healdsburg and Windsor, Cal Fire officials said Sunday at a news conference. The California Highway Patrol shut down a portion of Highway 101 from Arata lane to Dry Creek road on Sunday just before 10:30 a.m. because the smoke in the region made it too difficult for drivers to see.

About 200 National Guard members have been called in to help fight the Kincade Fire. More than 3,000 firefighters are also battling the flames. Oct. 27, 2019

Cal Fire said that the winds gusted at speeds of 93 miles per hour in Sonoma on Saturday night into Sunday. Winds at that speed, firefighters said, can carry embers over one mile with a 90 percent chance of starting spot fires.

Because of that, PG&E had turned off power to a total of 960,000 customers, or roughly 2 million people, throughout 36 counties in the state. It was the third preventive shutoff this year and the largest.

In all, nine fires were burning in California, not including two smaller fires that erupted in Contra Costa County and in Vallejo.

A spokesman for the National Weather Service said all is not over: Another big wind event is slated for Tuesday into Wednesday. A CalFire spokesman said he didn't think the full containment of the Kincade Fire would come until Nov. 7.

A home goes up in flames in Healdsburg

Cal Fire reports there are 79 structures including 31 homes so far destroyed in the Kincade Fire not including this home in Healdsburg. Sara Zendehnam reports