OAKLAND, Calif. - Vigilant residents of an Oakland Hills neighborhood have worked together to stop a resident from feeding a family of coyotes in the area. 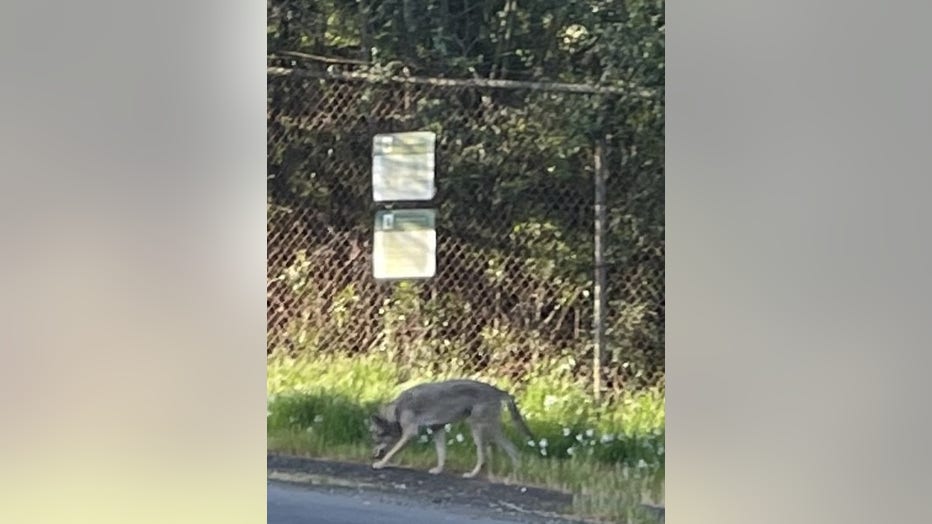 This coyote was seen in an Oakland neighborhood, near a site where someone was leaving behind food and water for the animals.

A post published last week on the neighborhood social media site NextDoor, shed light on the issue, saying someone was leaving water, along with what appeared to be dog food, on the side of the road at Harbord Drive near Clarewood Drive in Upper Rockridge, near the property of the Mountain View Cemetery. 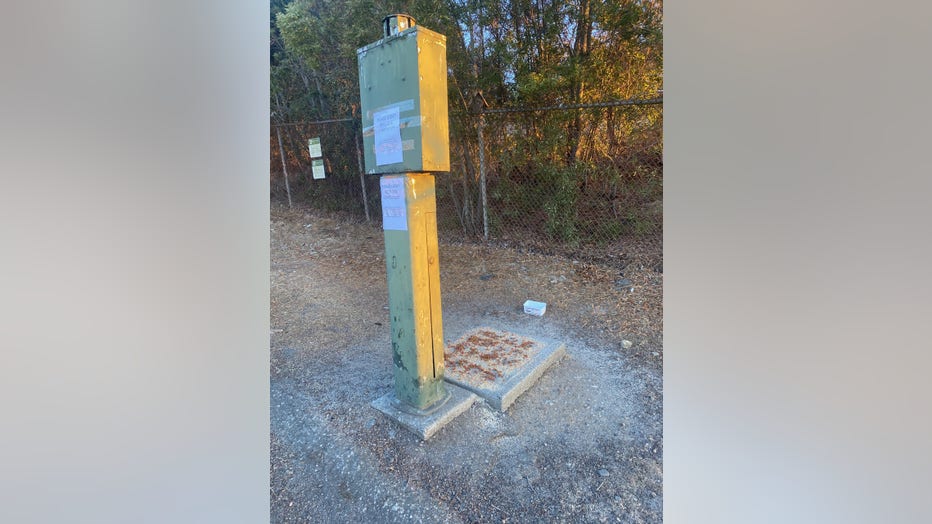 Someone was leaving food and water for a family of coyotes in an Oakland Hills neighborhood.  (Manan Shah )

Manan Shah, who wrote the post, shared that the practice might be leading to changing and potentially dangerous behavior among the coyotes in the area. 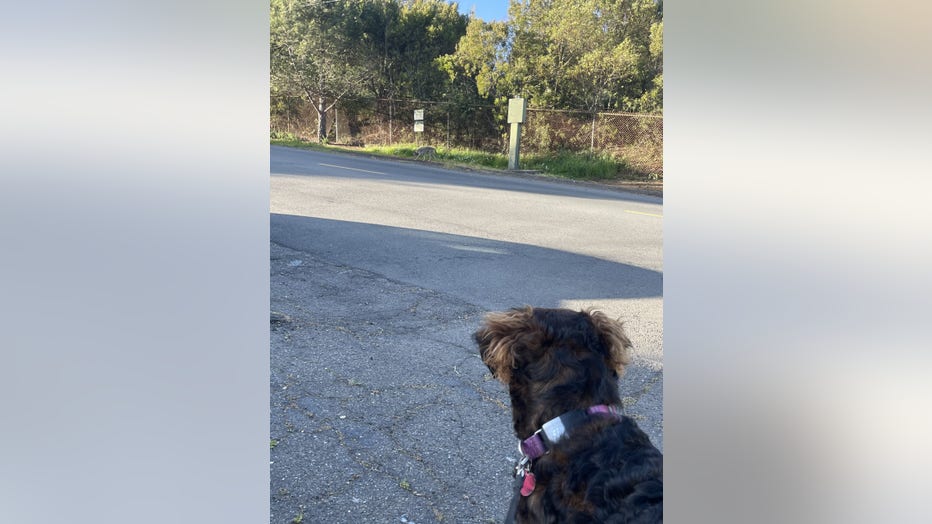 Oakland resident, Manan Shah, took this photo while walking his dog. A coyote was seen in an area where someone was leaving behind food for a family of coyotes. (Manan Shah)

"The Coyotes are becoming more confident in wandering the neighborhood," Shah wrote, adding, "Every morning we walk our dog through the area and see them. Yesterday the coyote started coming at my wife and now everyone is nervous about walking the area."

Shah said he's posted signs at the location where the feeding was happening, as he called on residents to also step in and ask the person feeding the coyotes to stop if they see him. 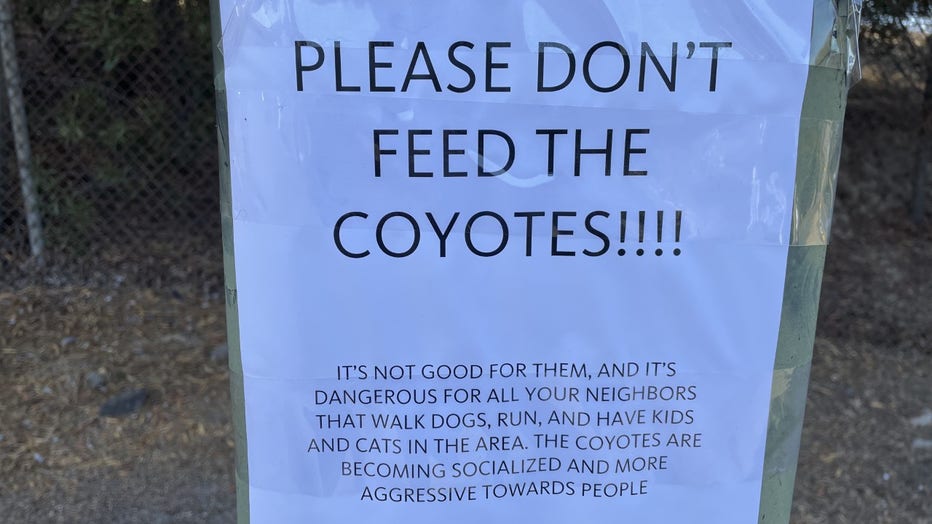 Shah’s post on NextDoor led to hundreds of comments, mostly from residents who echoed concerns about the practice and chimed in about their own observations of coyotes in the neighborhood, with some reporting sightings in the middle of the day, within blocks of several schools.

Jay Wolberg warned, "I saw one roaming the area 2 blocks away from Hillcrest Elementary at 3:00pm last week when kids were walking home from school. Be alert."

Another NextDoor user urged, "It is very important to stop feeding wildlife. Once coyotes become used to eating here it is a short step to becoming comfortable wandering more of the neighborhood."

In a follow-up post a few days later, Shah updated residents that he had approached the neighbor whom he believed was leaving behind the food and said unfortunately, the man would not agree to cease the practice.

"We spoke at length and he feels he’s doing the right thing for them. I pointed out all the ways this is not helping the coyotes or the neighborhood, but got nowhere with the conversation," Shah shared, adding, "If you see him on Clarewood just down the hill from the Harbord intersection, please let him know your concerns as well."

Shah's efforts, along with others in the neighborhood, may have worked. As of Monday morning, a check of the location showed no food or water. It also appeared that residents collectively worked to get state wildlife officials to intervene.

NextDoor user Carolyn Hutton issued an update on the situation and thanked those who, like herself, called into the California Department of Fish and Wildlife (CDFW) tip line to express concerns about the neighborhood coyote feeder. "We received a call from the warden today to let us know that yesterday he visited the neighbor and spoke with his wife about the issue. She stated that they will no longer feed the coyotes," Hutton wrote on Monday.

The incident in Oakland came on the heels of a photo released by San Francisco animal care officials in August, showing a woman caught on camera feeding a platter of raw meat to wild coyotes in the city’s Bernal Hill neighborhood.

There is a search for a woman who was caught on camera feeding a platter of raw meat to wild coyotes in the middle of San Francisco Bernal Hill.

San Francisco Animal Care and Control officials released the photo asking for the public’s help in finding the woman.

As of yet, the agency said the woman has not been located. Officials stressed that it's an ongoing problem in the city. "We still have reports of feeding all the time. It's crazy how much feeding is going out there," said Deb Campbell spokeswoman for San Francisco Animal Care and Control. "The feeding welcomes animals into the neighborhoods and into situations they wouldn't naturally go," she added.

Animal experts warned that while people may think they're helping wild animals by feeding them, the practice does far greater harm than good.

"However well intended, feeding coyotes, or any wild animals, puts them in danger by interfering with their natural instincts to be wary of people," Oakland Animal Services Director Ann Dunn said in a statement to KTVU.

"A habituated animal, who has lost that natural fear as the result of human feeding, is very likely to begin approaching people, leading to the likelihood of their being euthanized," Dunn said, adding, "If you love wild animals, help keep them wild by avoiding interacting with them in any manner."

State officials also noted that the practice is also illegal. "Intentionally feeding wildlife could be considered a crime," Ken Paglia, a spokesman for CDFW told KTVU, "Anything done intentionally to disrupt a coyote’s normal behavior pattern is illegal," he said.

The agency said, ultimately, if possible, community members should work together to resolve issues involving wildlife.

"The biggest thing residents can do if they are having coyote conflicts is take away the opportunities," Paglia said, "That sometimes means working together as a neighborhood and figuring out where the sources are coming from… for example, a resident who is feeding coyotes."

It’s exactly what Oakland residents did in this case. On Monday, Shah followed up with another message, expressing his appreciation to neighbors for helping to take action. "In the long run it’ll be better for the wildlife and our community," he said, as he encouraged continued vigilance. "I’d ask everyone keep an eye out to make sure this doesn’t start up again."

To report a potential crime involving wildlife, the CDFW has set up a confidential tip line, which you can find here.