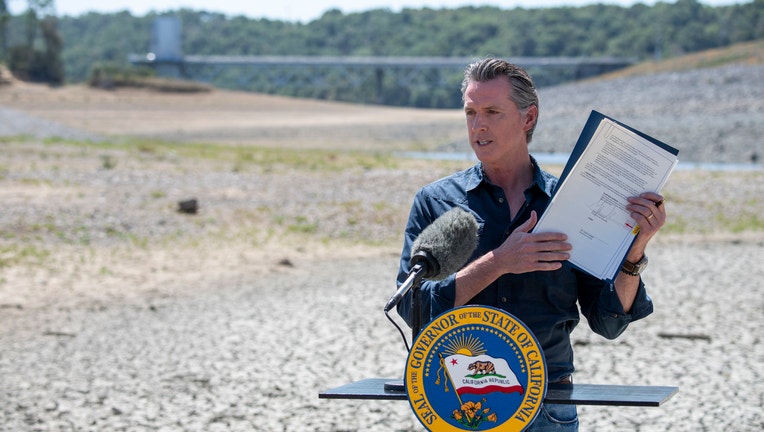 California Governor Gavin Newsom speaks during a conference was held on the dry Lake Mendocino Lakebed, in Mendocino County, Calif., on April 21, 2021. Newsom proclaimed a regional drought emergency for the Russian River watershed in Sonoma and Mendo

CLOVERDALE, Calif. - In order to protect fish habitat and drinking water supplies during the current drought, the State Water Resources Control Board announced Wednesday it is restricting water diversions in the Upper Russian River basin.

The restrictions affect 930 "junior" water rights holders whose rights date from after 1914 and come in the wake of Gov. Gavin Newsom's April drought emergency declaration for Sonoma and Mendocino counties. That declaration now includes 41 counties.

"Unless we immediately reduce diversions, there is a real risk of Lake Mendocino emptying by the end of this year," said Erik Ekdahl, deputy director of the Water Board's Division of Water Rights.

"We need to implement the water rights system to protect supplies in case of another dry winter, which could transform the Russian River into a series of disconnected pools and restrict the availability of drinking water in the area," Ekdahl said.

The restrictions announced Wednesday will likely remain in effect until winter rains restore water flows. People violating them could face daily fines of up to $1,000.

According to the Water Board, as of April 30, Lake Mendocino was at 43 percent of capacity and Lake Sonoma was at 62 percent, the lowest on record for this date.

So far this year, rainfall in Santa Rosa and Ukiah is less than 40 percent of long-term averages and 2020 was, at the time, the third-driest year on record, according to the Water Board.

The Russian River watershed includes Sonoma and Mendocino counties, and water stored in Lake Mendocino north of Ukiah is released downstream to maintain flows in the Upper Russian River.