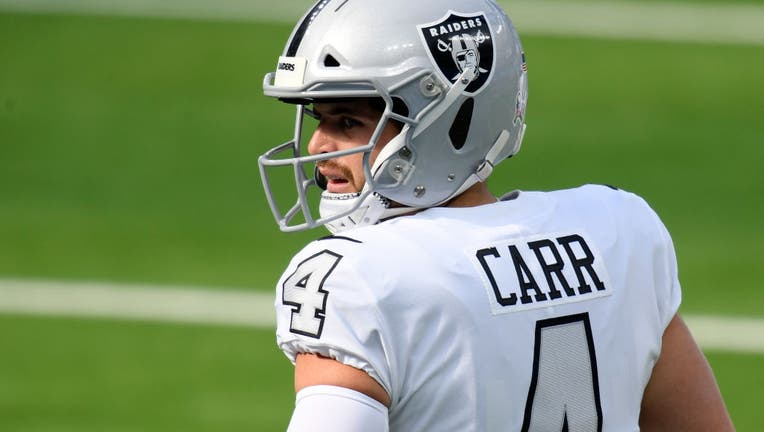 INGLEWOOD, CALIFORNIA - NOVEMBER 08: Derek Carr #4 of the Las Vegas Raiders during warm up before the game against the Los Angeles Chargers at SoFi Stadium on November 08, 2020 in Inglewood, California. (Photo by Harry How/Getty Images)

Quarterback Derek Carr was a full participant in practice less than a week after leaving a game with a groin injury and could be on target to play this week for the Las Vegas Raiders.

Carr’s status was in question after he injured his groin on a scramble in the first quarter last Thursday night against the Los Angeles Chargers.

He practiced on a limited basis on Tuesday in a sign he could return without missing a game and then was upgraded to a full participant on Wednesday. The final injury report before Saturday night’s game against the Miami Dolphins will come out Thursday.

Carr has a history of playing through injuries, having missed only two regular-season starts in seven seasons in the NFL. He broke his ankle in Week 16 in 2016, missing out on his only chance to appear in the playoffs and missed only one game in 2017 after breaking a bone in his back.

Carr even played an entire season with a sports hernia in college at Fresno State in 2012.

The Raiders have only slim playoff hopes after losing four of five games to spoil a promising start to the season. They would need to beat Miami and Denver the next two weeks, hope Baltimore loses to the Giants and Cincinnati, and have the Dolphins lose in Week 17 to Buffalo to get into the playoffs for the second time in the past 18 years.

Marcus Mariota, the No. 2 overall pick by Tennessee in 2015, played well in Carr’s absence last week and will be ready to go again if needed.

The Raiders will be without starting linebacker Nick Kwiatkoski this week after placing him on the COVID-19 list. Cornerback Isaiah Johnson was taken off the COVID list.