A plan to demolish four dams along the Klamath River, the largest river restoration project in American history, was celebrated Thursday by tribal, state and federal leaders.

KLAMATH RIVER, Calif. - A plan to demolish four dams along the Klamath River, the largest river restoration project in American history, was celebrated Thursday by tribal, state, and federal leaders.

The dam removals near the California-Oregon border are considered significant progress toward restoring the river’s ecosystem and fish habitat.

"Clean water, healthy forests and fertile land made the Klamath River Basin and its surrounding watershed a home to tribal communities, productive agriculture, and a place where abundant populations of migratory birds, suckers, salmon, and other fish could thrive," U.S. Interior Secretary Deb Haaland said. "We must take urgent and necessary action to protect this special place."

Gathering along the Klamath River at the Iron Gate Fish Hatchery in Siskiyou County, Haaland joined Govs. Gavin Newsom of California and Kate Brown of Oregon, Congressman Jared Huffman, and leaders of the Karuk and Yurok tribes applauding the restoration plan.

"Our prayers have been answered," Yurok Tribal Chairman Joseph James said. "It’s a time in history that our people are going to look back – Oregon, California, congressmen, tribal leaders answered the bell and paved the way. This is how things get done." 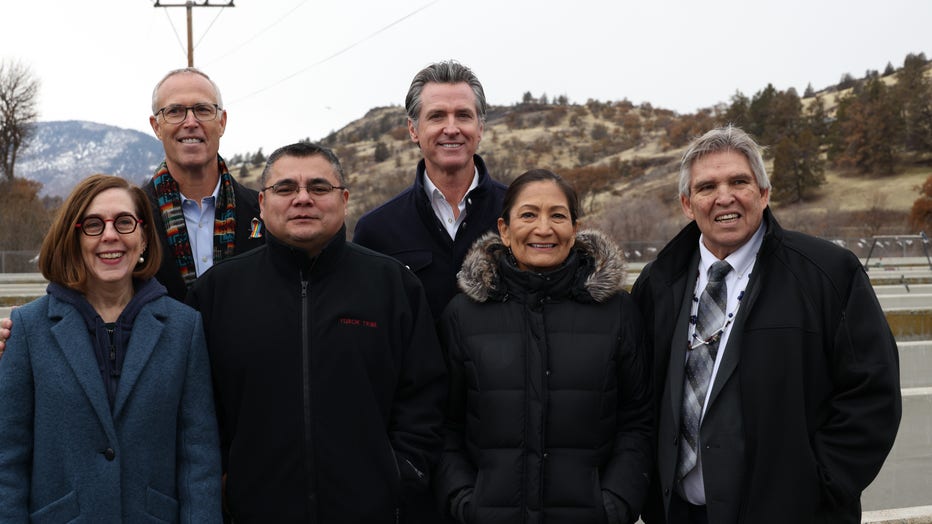 It has been nearly two decades in the making, with work expected to start next year and continue through 2024.

"Finally we can say with certainty these dams are coming down," said Gov. Brown "It’s about damn time."

Tribal leaders spoke about the fight to remove the dams and restore the river’s ability to flow freely, allowing salmon and other species to thrive.

The restoration project will open up nearly 400 miles of salmon habitat, a fish and a river that holds cultural ties to Klamath tribes.

"My dream is to not only bring the salmon back but bring back a way of life," Karuk Tribal Chairman Buster Attebery said. "Let’s restore that culture."

PacifiCorp, which owned the dams, used them to generate power. The company said this plan balances a desire for dam removal with protections for electricity customers.

"I think there’s been a sense of ongoing anxiety that has been expressed and doubt that this would ever come together," Gov. Newsom said. "We’re here as a testament to people’s faith and devotion to this cause."