Ever since her first son was born, Janise Diolula wanted to become a nurse, but she never imagined she’d have trouble finding a job, especially amid a pandemic.

DAVIS, Calif. - Ever since her first son was born, Janise Diolula wanted to become a nurse, but she never imagined she’d have trouble finding a job, especially amid a pandemic.

Diolula’s son, Logan, was born prematurely and immediately taken to the neonatal intensive care unit at Mills-Peninsula Medical Center in Burlingame. While he’s a grown and healthy 9-year-old now that experience became inspiration for this mother-of-two to pursue nursing.

“The nurses there just treated us so well and that’s how I fell in love,” Diolula said. “They taught me how to be a mom, and they showed me how to care for my son.”

In December, she graduated with nearly 50 other nursing students at UC Davis. She was prepared to practice her passion being a newly licensed and registered nurse. But she was met with rejection and disappointment.

Letters and emails claimed she lacked experience or positions had been filled by others more qualified. The rejections came while many employed nurses were overworked or preparing to handle a surge of COVID-19 patients.

Other nurses in her class, such as Breanne McPherson, are left sitting on the sidelines wondering why they couldn’t pass medications, hang IVs, or do other nursing duties they’ve trained for and want to do.

“This is not what I planned for,” McPherson exclaimed. “It’s frustrating!”

“The entire health care system has become disrupted,” UCSF Professor Joanne Spetz said. “I think recent nursing graduates are really kind of caught in the crossfire of that.”

Spetz would know because she’s researched and studied the nursing labor market for two decades. She said employers, especially in big California cities have become pickier.

Additionally, hospitals have taken financial hits because day-to-day operations and elective surgeries aren’t happening, which has kept many health care employers from taking on novice nurses.

“Right now they are kind of this little forgotten about group,” said Spetz.

McPherson estimated roughly three quarters of her classmates are still jobless. She was told by several hospitals that positions were put on hold or frozen indefinitely because of coronavirus. 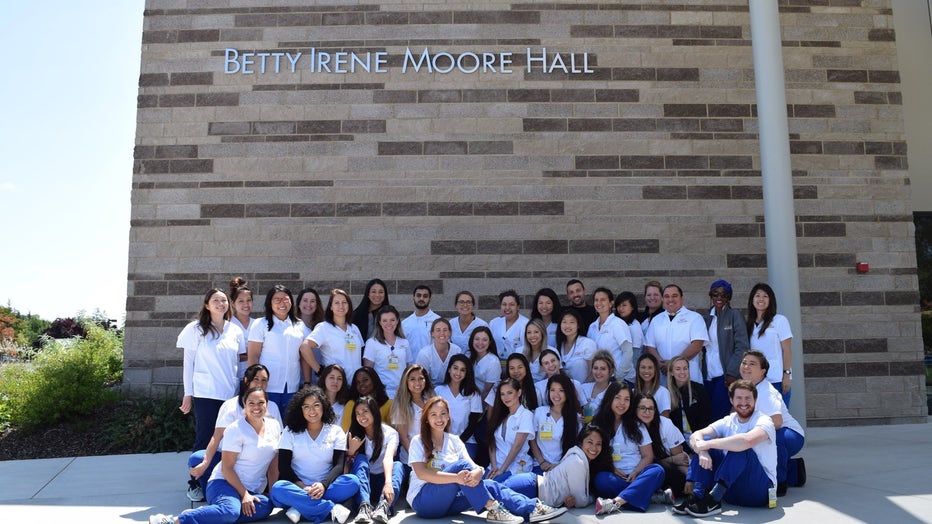 Meanwhile, California Gov. Gavin Newsom called on nurses to step up last month. The state’s Health Corps aims to support response to the virus with an initial goal of registering 37,000 health care workers.

“If you’re a nursing school student, a medical student, we need you,” Newsom said in April. “If you’ve just retired in the last few years – we need you.”

KTVU found only about 70 nurses have actually been called on to help. All of them are currently getting paid to work at Sleep Train Arena in Sacramento which has been converted to a COVID-19 facility.

The state has also issued waivers to allow leeway for nursing students to finish school early. But nurses who graduated before the pandemic feel left behind because hospitals aren’t giving them a chance.

“A lot of employers are so financially tight at any given time that for them to drum up the extra money to invest in onboarding extra, new graduates or extra employees is just not something they feel like they have the bandwidth to do,” Spetz said.

The California Hospital Association, which advocates on behalf of hospitals told KTVU it doesn’t get involved in operational issues or hiring decisions.

Instead, KTVU reached out to all major health care employers in the Bay Area to better understand what was happening, but only heard back from three. Kaiser Permanente said it’s restricting new nurses in its facilities. Sutter Health explained it was cross-training nurses just to keep the current staff employed. And Stanford Health Care admitted it had to reduce hours across the board because of the economic impact caused by coronavirus.

Despite that, emergency room nurses said they feel worn out and can use the help.

“We’re always short of nurses,” an emergency room nurse said. “We’re doing the best we can in the wake of COVID-19.”

But with other parts of hospitals low on patients, that also causes low finances. The California Board of Registered Nursing said it’s aware of layoffs but it doesn’t have jurisdiction over employment or nurses’ placement.

Nursing schools and their professors offered some advice. They suggest new nurses should not limit themselves to just hospitals and consider nursing homes, assisted living facilities, and home health care as alternatives. Additionally, it has been widely reported health care workers in those areas are in desperate need. If nurses simply want to help during the pandemic, volunteering opportunities are out there, too.

Some health experts also believe new opportunities will be available as California ramps up testing and contact tracing. Still, for now, many new nurses are left to search and hope for the chance to provide critical care.