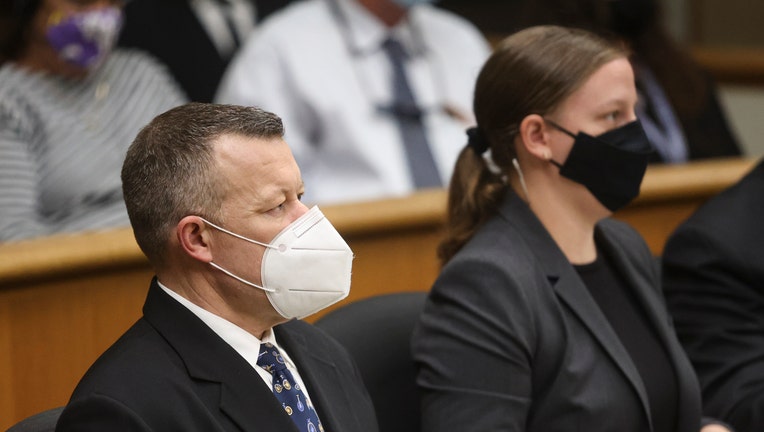 Paul Flores, listens during arraignment. He is accused of the murder of Cal Poly student Kristin Smart. Sara Sanger is one of his defense attorneys. Judge Craig van Rooyen moved to proceed the case towards trial for both Paul and Ruben Flores with ar

LOS ANGELES - The smiling face of Kristin Smart still looks out from a billboard in front of attorney James Murphy Jr.’s law office more than 25 years after the college freshman vanished from a campus on California’s picturesque central coast.

It once offered a $75,000 reward to help find the college student, but these days the billboard simply says: "Justice For Kristin."

Smart is still missing, but the man last seen with her at California Polytechnic State University in San Luis Obispo in 1996 is on trial more than a year after he was arrested on a murder charge along with his father, who is accused of helping hide her body.

Opening statements are scheduled Monday in Monterey County Superior Court in Salinas in the trial of Paul Flores and his father, Ruben Flores, who is charged as an accessory. Both men have pleaded not guilty.

The younger Flores, now 45, killed the 19-year-old during an attempted rape on May 25, 1996 in his dorm room at Cal Poly, where both were first-year students, prosecutors said. His father, now 81, allegedly helped bury the slain student behind his home in the nearby community of Arroyo Grande and later dug up the remains and moved them.

Paul Flores had long been considered a suspect in the killing, but prosecutors only arrested him and his father in 2021 after the investigation was revived.

San Luis Obispo Sheriff Ian Parkinson acknowledged missteps by detectives over the years and he credited a popular podcast about Smart’s disappearance called "Your Own Backyard" for helping unearth new information and inspiring witnesses to speak with investigators.

Smart’s remains have never been found and the mystery of how she vanished from the scenic campus tucked against a verdant coastal mountain range is likely to be central to the trial.

Investigators have conducted dozens of searches over two decades but turned their attention in the past two years to Ruben Flores’ home about 12 miles (20 kilometers) south of Cal Poly in the community of Arroyo Grande.

Behind lattice work beneath the deck of his large house on a dead end street off Tally Ho Road, archaeologists working for police in March 2021 found a soil disturbance about the size of a casket and the presence of human blood, prosecutors said.

The blood was too degraded to extract a DNA sample. While a blood expert said it was human blood, the test used did not rule out the possibility it was from a ferret or ape, though court records said no remains of such an animal were found there.

Murphy, who has sued the father and son on behalf of Smart’s parents, scoffed at the idea that it was anything other than human blood.

"The size of the area in which the blood was found would make it a prehistoric ferret that would be in Jurassic Park," Murphy said. "When was the last time you drove down Tally Ho Road in Arroyo Grande and saw a primate?"

The lawsuit Murphy filed against Ruben Flores alleged that "under cover of darkness," the father and unnamed accomplices moved the body four days after investigators searched his house in February 2020. Investigators didn’t conduct their dig beneath the deck until more than a year later.

San Luis Obispo Superior Court Judge Craig Van Rooyen ordered the pair to trial after a 22-day preliminary hearing in which he found a "strong suspicion" the father and son committed the crimes they were charged with, that a grave existed under Ruben Flores’ deck and it once held Smart’s remains.

Prosecutors, defense lawyers and San Luis Obispo sheriff’s deputies are constrained by a court order prohibiting them from discussing the case.

Attorney Harold Mesick, who represents Ruben Flores, previously said the evidence unearthed was ambiguous. He said that soil under the deck had been dumped there after being excavated to lay a foundation nearby.

"It was a hot mess because it’s been previously excavated," Mesick said. "If we even call it evidence, it is so minimal as to shock the conscience."

Paul Flores was the last person seen with Smart on May 25, 1996 as he walked her home from an off-campus party where she got intoxicated.

He downplayed his interactions with her when he first spoke with police three days later, saying she walked to her dorm under her own power, though other witnesses said that she had passed out earlier in the night and Flores helped hold her up as they walked back to campus.

SEE ALSO: Passenger falls out of car on Highway 24, fatally struck by another vehicle

Flores had a black eye when investigators interviewed him. He told them he got it playing basketball with friends, who denied his account, according to court records. He later changed his story to say he bumped his head while working on his car.

At a preliminary hearing last year, prosecutors presented evidence that four cadaver dogs stopped at Flores’ room and alerted to the scent of death near his bed.

Van Rooyen prohibited prosecutors from presenting evidence alleging Paul Flores had a history of stalking, inappropriate touching and aggressive sexual behavior toward women, including allegations he drugged and raped four women in the Los Angeles area years after Smart disappeared. Over the years, women called him "Chester the molester" and "psycho Paul," according to a court document.

Van Rooyen ruled in favor of a defense request to move the trial out of San Luis Obispo County because it was unlikely the Flores’ could receive a fair trial with so much much notoriety in the city of about 47,000 people.

The case was moved 110 miles north to Salinas, a small city in the agricultural region where John Steinbeck set some of his best-known novels.

Defense lawyer Robert Sanger previously said the evidence remained the same as it did in the 1990s when Paul Flores was the prime suspect but never charged with a crime.

SEE ALSO: Millions of dollars worth of jewelry stolen from armored truck traveling from San Mateo to Southern California

"The evidence then and now is based on speculation and not proof of facts," Sanger said in court documents.

Sanger has tried to pin the killing on someone else — noting that Scott Peterson, who was later convicted at a sensational trial of killing his pregnant wife and the fetus she was carrying — was also a Cal Poly student at the time.

Trial Judge Jennifer O’Keefe — who is a year younger than Kristin Smart would be today — however, has barred suggestions of alternate suspects unless Sanger can provide evidence of their direct involvement.

Separate juries were selected to weigh the evidence against each defendant. The trial is expected to last about four months.