HEALDSBURG, Calif. - Pacific Gas & Electric announced Sunday that it is again reviewing data and may shut off power Tuesday and Wednesday for hundreds of thousands of residents in Northern California as fierce winds, which have reached up to 100 mph this weekend, continue to stoke wildfires burning up and down California.

An estimated 965,000 customers in 30 counties--about 2 million people-- had their power shut off this weekend during the utility's second "public safety power shutoff. ''

The National Weather Service said the next wind storm is expected Tuesday night into Wednesday night with wind speeds ranging from 50 to 60 mph.

Andrew Vesey, the president and CEO for utility operations, said customers who lost power this weekend need to have charged cell phones so the utility can alert them of the upcoming power shutdown.

"Cusomers impacted by this event may not have means of communication to get information from PG&E,'' Vesey said. "It's imperitive that we communicate with you in these types of events."

Vesey said customers who need power for cell phones or laptop computers can go to one of PG&E's 60 community resource centers, which have charging stations and Wi-Fi, along with hot drinks and food. The locations are listed on PG&E.com.

Utility officials on Sunday said they understand that the power shutdowns are frustrating and unpopular, but underscored the need to cut power during times of hurricane-force winds.

PG&E meteoroligst Scott Strenfel said the winds this weekend were the strongest since October 2017 when the North Bay fires errupted.

Strenfel said winds reached 90 mph in the North Bay, 100 mph at a PG&E weather station, 72 mph atop Mount Saint Helena and 60 to 70 mph in the Sacramento Valley

There are currently at least 12 large fires burning in the state with the Kincade Fire in Sonoma County the largest. That fire has charred over 54,928 acres and forced tens of thousands of people from their homes.

The power shutoffs come after PG&E documents showed the utility's equipment was responsible for 400 fires in Northern and Central California in the past two years. PG&E found a broken high voltage transmission line near the point of ignition in the Kincade Fire, though utility officials claim it had been inspected before the fire.

About 500,000 customers in the nine Bay Area counties were impacted by the public safety power shutdowns. Here's a breakdown on the number of customers in each county.

Here's the breakdown throughout the state: 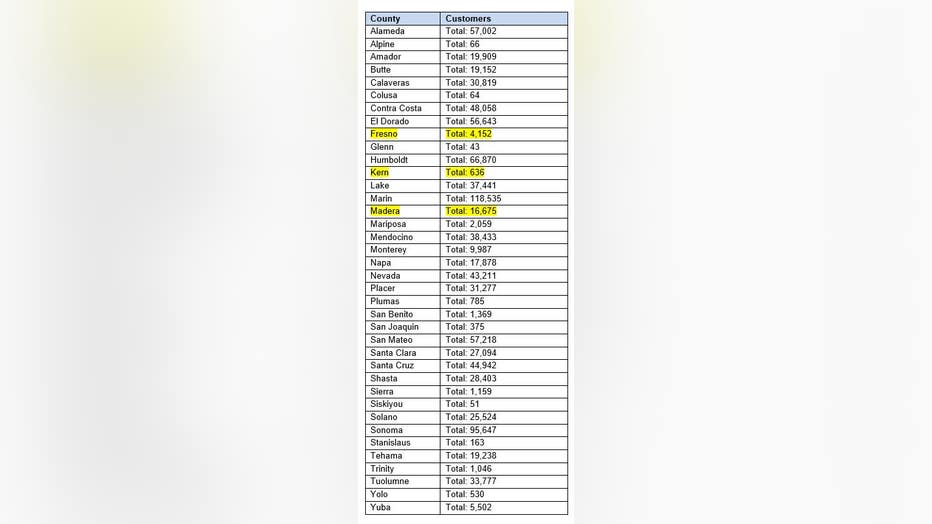